Pensions in an independent Scotland

More generous policy proposals under an independent Scotland, but funding is uncertain

The Scottish and UK governments both seem to agree that state pension provision for current pensioners (and those reaching pension age before April 2016) wouldn't be affected in the event of a yes vote. The UK pensions minister told the Scottish affairs committee that those who had "accumulated rights" would be entitled to the same sum no matter what the outcome. However, he said there were still questions over which government would pay the money.

Currently, the UK-wide pension scheme includes the basic state pension — based on the number of National Insurance (NI) years you've built-up — and the second state pension — extra money based on your earnings and benefits. These will be replaced from April 2016 by a flat-rate single-tier pension.

The Scottish government's plans for the new state pension are more generous than the UK government's — how much more will depend on future UK government decisions. But without the security of a UK-wide system, the UK Government argues that an independent Scotland may need to raise taxes or cut public services in order to offer future pensioners a more generous deal.

Firstly, the Scottish government proposes to initially set the single-tier state pension at £160 per week, at least as high — if not higher — than in the rest of the UK, where the level will not be decided until shortly before single tier is introduced in April 2016. The Scottish government said in a report it expects the UK level to be £1.10 lower at £158.90 per week (and has more recently said it expects it to be £5 lower at £155 - leaving new pensioners in Scotland with an extra £260 per year). It says if it the UK level is set above £160 then this will be matched in Scotland. The UK government has estimated that for every £1 additional increase in the starting level of single tier, the extra cost to Scotland could be around £50 million per year in 20 years' time.

Secondly, pensioners in an independent Scotland could also see their pensions increasing at a higher annual rate than the rest of the UK in the short term — although it seems likely the same plans would be introduced in the UK after the next election.

That's because the Scottish government says that for at least the first term of an independent parliament it will increase new single-tier state pension levels by the 'triple-lock' (whichever is the highest of the growth in wages, prices or 2.5%). That's currently used for the basic state pension, but at present the UK government has committed to increasing the single-tier by 'at least the percentage that average national earnings have grown in the previous year'. Although this has the potential to be lower than both price inflation (CPI) and 2.5%, the independent Office for Budget Responsibility has forecast that from 2015/16 to 2018/19 the highest of the three will be increase in earnings. So despite providing a level of security for pensioners, in reality the triple-lock is unlikely to provide greater benefits in the short-term.

Additionally, the Conservatives, Labour and the Lib Dems have all said they would retain the triple lock, so it seems likely to continue in the UK after the current parliament. If so, in the longer term it could continue in the UK but not in an independent Scotland.

Thirdly, the UK is abolishing Savings Credit under its new system, but it would continue in an independent Scotland. The Scottish government has estimated retaining this benefit for pensioners with a modest income who have saved for retirement could cost £8.5 million in 2016-17 and that 'total costs will increase over time'. The UK government has estimated future costs to the Scottish government — around £20-£30 million (in current prices) in 2020-21 — rising to £200 million per year in around 20 years' time.­

Fourthly, the Scottish government has also said it would keep the option of enhancing pensions with partner's National Insurance contributions — something which is discontinuing in the UK — for a further 15 years. It says that the cost would be 'low' as "fewer than 2,600 women are estimated to receive a lower pension by 2020 as a result of this option being abolished".

Lastly, the Scottish government has said it will 'reserve judgement' on the UK government's plans to bring forward an increase in the pension age from 66 to 67. In the UK, the increase is now expected to take place between 2026 and 2028.

According to the Scottish government, this means that "a 65 year-old entitled to a total pension of £160 per week could expect the lifetime value of their state pension to be around £10,000 (men) or £11,000 (women) less in Scotland than in the UK as a whole". 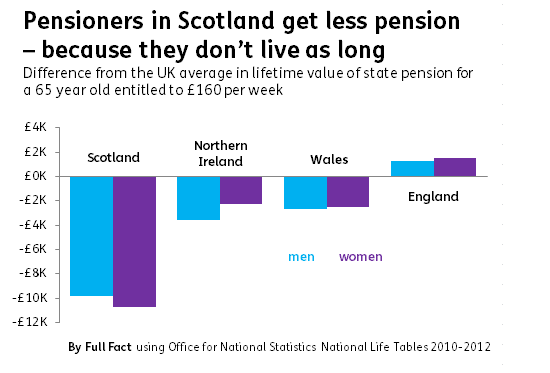 However, Scotland's population is ageing faster than the UK as a whole. Official projections show that Scotland is expected to have a higher ratio of people of pension age to the working age population than the UK average over the next twenty years. 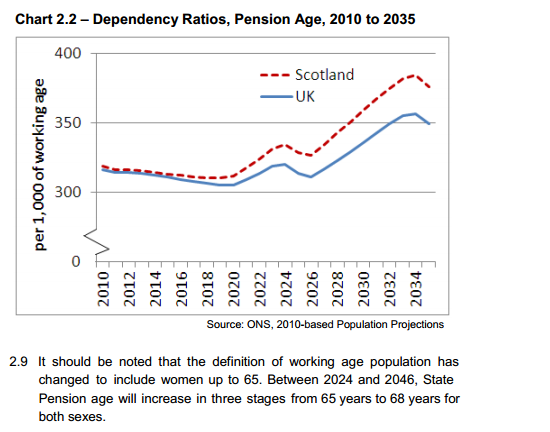 The Institute for Fiscal Studies has said that if Scotland doesn't follow the UK government, effectively delaying the increase in pension age, it would be costly for a rapidly ageing population and mean tougher choices in other areas of spending and/or taxes.

It says the UK government's estimate — that delaying the increase would mean spending on the state pension and other benefits in Scotland would rise by around £550 million per year in today's terms —  could be an underestimate, since if people retire earlier then in addition to higher pension payments they will also pay less tax.

The Scottish government says that by encouraging skilled migrants to move to Scotland, as well as convincing young people to stay and attracting others back, it would be able to boost Scotland's working-age population, thereby reducing its dependency ratio.

Our Passports and Immigration piece looks at the Scottish government's options on immigration policy, including what this might mean for the Common Travel Area.

Private pensions would be affected by EU law

While public service pensions would also continue to be protected, private pensions might be affected. Scotland's accountancy body ICAS has said Scottish independence would have far-reaching implications for private-sector pensions due to European Union law. Pension schemes operating between Scotland and the rest of the UK would be classified as 'cross-border' after independence, and EU rules mean that if a pension scheme is run in more than one member state then it needs to immediately be fully funded rather than have a staged recovery plan. It says it remains unclear how this funding issue is likely to be satisfactorily resolved.

The Scottish government has said that it would negotiate arrangements to make this transition.  It also says that there would be no change to individuals' private pension rights and accrued entitlements.

There are currently various UK-wide organisations for the protection and regulation of pensions.

The Scottish government says it would set up a Scottish Pensions Regulator, a Scottish equivalent of the National Employment Savings Trust, which provides a workplace scheme for people on low/moderate incomes, and a compensation scheme which mirrors the level of protection provided in the UK Financial Services Compensation Scheme. It wants to keep a UK-wide Pension Protection Fund (PPF), which compensates workers if their employer goes out of business, with the option of establishing a Scottish PPF.

It has not said how much replicating existing UK bodies would cost or how this would be funded.