The Scottish government wants to boost international exports. In the event of independence it plans to open between 70-90 consular offices overseas with the aim of helping Scottish companies to expand internationally.

But the UK government has warned that independence would hinder trade with what would be Scotland's biggest export market: the rest of the UK, by introducing "barriers to trade and obstacles to labour and capital mobility where there presently are none".

No complete data on Scottish 'exports'

Exports are goods or services produced in one country and sold overseas. For the purposes of this guide we can think of goods and services produced in Scotland and consumed by the rest of the UK as Scottish 'exports', since that's how they'd be categorised under independence.

There are no export accounts for Scotland like there are for the UK as a whole, but the Scottish government instead produces its own annual estimates based on a survey of Scottish businesses.

While they're the best statistics available, they should be treated with some caution. They don't include the substantial amount of North Sea oil and gas exports, since they're classified as exports from the UK as a whole.

There's also no legal requirement for companies to report or record their activities at a sub-UK level. According to the latest version of the report, a substantial number of respondents found it difficult to distinguish between Scottish and UK sales because of accounting practices - so they had to guess how much of their trade within the UK was outside of Scotland.

The rest of the UK receives about 65% of Scottish 'exports'

The survey found that 65% of Scottish exports ended up in the rest of the UK in 2012; the remaining 35% were international. Both are when oil and gas are excluded. 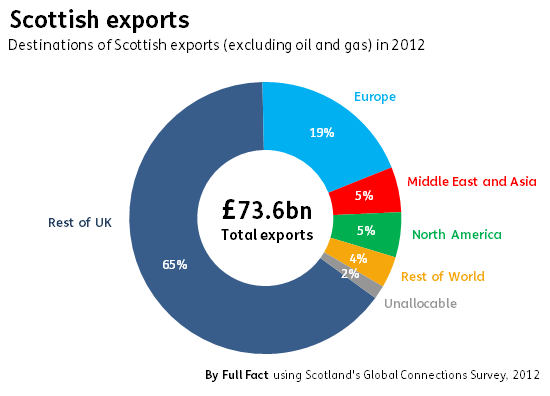 Separate estimates of Scottish oil, gas and petrol exports - found to have been worth about £30 billion in 2012 - show a smaller share of these products are exported to the rest of the UK. About 58% of these exports were estimated to have gone overseas, a much higher proportion than the 35% of goods and services exports. We can't compare these to come up with an overall figure though, as they both cover exports of petroleum products.

Excluding these estimates, the most exported Scottish products were food and beverages at a value of £4.7 billion. The USA was Scotland's biggest single customer internationally - receiving 14% of its international exports.

Trade within the UK is relatively cost-free as there are no immigration controls at internal borders or fees for the movement of goods or workers.

There are a number of possible outcomes of Scottish independence which could increase trade costs between Scotland and the rest of the UK. These include: a change of currency, changes to taxes, and restriction of movement across the border.

The Scottish government wants to keep the pound in order to make trade with the UK easier. However, the Treasury has stated "if Scotland walks away from the UK, it walks away from the UK pound". If Scotland and the rest of the UK can't agree on a sterling currency union, Scotland could alternatively adopt the euro, or create its own currency. Any change in Scottish currency (explained more in our Spotlight) would mean that money would have to be exchanged, driving up costs.

The Scottish government says that any taxes that affect cross border businesses will be the result of joint agreements with the UK. The Confederation of British Industry (CBI) points out that this could still result in two different tax systems — increasing administrative costs for businesses.

Whether there would be customs controls on people or goods crossing the UK-Scotland border would depend on whether Scotland joins the Schengen area — a European passport-free zone that the UK and Republic of Ireland are not currently part of. The UK government says that international-style border controls could add lengthy delays to journeys by introducing obstacles to free travel.

The tendency to trade within countries rather than across borders is known as the "border effect". The UK government says that the border effect of Scottish independence could "reduce the level of real income in the Scottish economy by 4% after 30 years".

Dr David Comerford, an economist from the University of Stirling, proposes that trade between Scotland and the rest of the UK would decrease if Scotland gained independence - which could negatively affect Scotland's GDP by as much as 5.5%.

But this figure assumes Scotland doesn't strengthen its international trade links. If it did, Dr Comerford also calculated that Scottish GDP could increase by up to 3.5%, even with the weakened Scotland-UK trade links.

Fact checks of direct relevance and specifically about matters of national importance in Scotland.