A second independence referendum: what does Scotland think?

Yesterday (13 March) the First Minister of Scotland announced her intention to seek approval for a second referendum on Scottish independence. But the government has questioned whether or not the people of Scotland want this.

On the whole people seem to be more in favour of there not being a referendum in the near future, although there was a swell in support for another vote on independence just after the referendum vote on Brexit. The latest poll to ask this question (as of 14 March) found that 49% thought there shouldn’t be an independence referendum before the Brexit negotiations are concluded, 39% thought there should be, and the rest didn’t know.

The difficulty with comparing the polls, as we discovered previously, is that they don’t always ask exactly the same question. Some ask if people think there should be another referendum at all, some ask if there should be one before the UK leaves the EU, others ask if it should be in the next two or three years. Inconsistent questions in the polls mean that it is harder to build up a complete picture of how people’s views on this subject might be evolving.

Professor Curtice concludes that “the apparent lack of enthusiasm for a second referendum amongst some supporters [of independence]… is the main reason why opponents of an early second ballot are apparently in the majority.”

This is potentially further explained by more recent research by Professor Curtice, based on ScotCen’s annual comprehensive survey of Scottish attitudes. It finds that one in three supporters of independence voted to leave the EU in last year’s referendum. As a result, he says that “there is a risk that linking independence closely to the idea of staying in the EU could alienate some of those who currently back leaving the UK”.

How people say they would vote in the event of another referendum is something that we do know more about.

Support for an independent Scotland is at the highest levels it has been since the late 1990s, according to social researchers ScotCen. Their annual survey of Scottish attitudes found that 46% of people asked said they were in favour of an independent Scotland compared to 42% who favoured staying in the UK, but with a Scottish parliament, and 8% favoured staying in the UK with no Scottish parliament at all.

This isn’t normally how pollsters ask about Scottish independence though. The typical question asked is ‘Should Scotland be an independent country?’ with only a Yes or No answer. Scotcen have also grouped together all related polls on this question.

Looking at all the polls taken since the Prime Minister set out her Brexit vision in mid-January this year (until 14 March) Professor Curtice said that they show on average a split of 48% in favour of independence and 52% against.

Someone saying they would act in a certain way is one thing, whether they would actually do it is another. In this instance some of the polls Professor Curtice is referring to also weighted these results by how likely the people answering said they would be to vote, in order to get an idea of what a real life result might be like. The results also exclude those who answered don’t know or didn’t say which way they’d vote, as these wouldn’t count on polling day.

He adds, “so the two sides look as though they are more evenly matched than they eventually proved to be two and a half years ago.”

A poll earlier in March conducted on the question of independence the results are neck and neck once you just look at people who said they’d be very likely or certain to vote. Another showed that the majority of support is for staying in the UK.

As always with polling it’s important to look at the trend multiple polls show, rather than taking them individually. We won’t be updating this every time a new poll comes out, but ScotCen publishes a record of all the latest polls here. 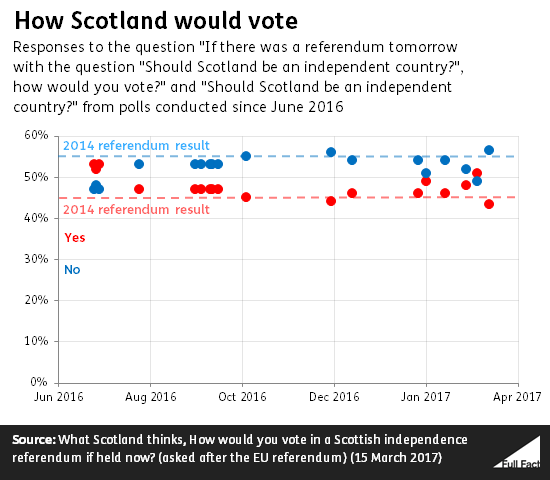