Experts said in a report published on 7 December that “maternal suicides are now the leading cause of direct maternal deaths occurring within a year after the end of pregnancy”.

But, somewhat confusingly to the lay reader, they also cite cardiovascular (heart and blood vessel) problems as “the leading cause of maternal death in the UK”.

There are, reading closely, two details that account for the apparent contradiction. Cardiac disease is classed as an indirect cause of death, whereas suicide has recently been reclassified as a direct cause of death. Direct deaths are “from pregnancy-specific causes” such as preeclampsia, whereas indirect deaths are “from other medical conditions made worse by pregnancy”.

However, suicide isn’t the main direct cause of death during pregnancy or within six weeks of giving birth. Between 2012 and 2014, 14 women died this way, compared to 16 who died from an ‘amniotic fluid embolism’ and 20 who died from ‘thrombosis and thromboembolism’. These are also classified as direct causes.

Where suicide overtakes other causes of death is between six weeks and one year after delivery, when it accounts for 15% of deaths—more than any other pregnancy-related cause. 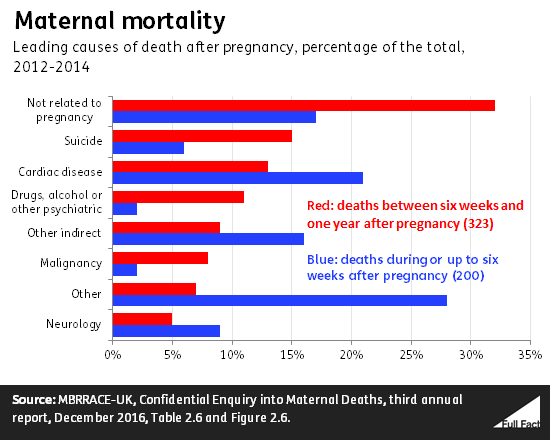 “Corporation tax is even much higher in the United States.”

It’s correct that corporation tax rates are higher in the USA than that UK.

Companies pay tax in the country where they locate their business, rather than the place where they make their sales. For example, a UK car manufacturer who sold cars in the United States would pay the UK rate to the UK government.

Corporation tax isn’t the only tax paid by UK businesses.

“My concern is that we trigger Article 50 in March—that’s what the House of Commons agreed to do [on Wednesday]—and if we spend two years negotiating this that’ll be another net £20 billion we’ve paid away.”

It’s correct that the government will pay tens of billions into the EU budget over the next few years. What’s less clear is whether this could legally be avoided.

Total payments to the EU are fixed over a seven-year period, with annual budgets set in order to meet this overall limit. The 2014-2020 period will see the EU spend over a trillion euro.

The UK is forecast to pay in £9.7 billion in the current financial year 2016/17, £8.4 billion in 2017/18 and £9.3 billion in 2018/19. This is the net contribution—taking off the discount we get because of the UK rebate and the money that comes back to the Treasury in EU funding. So £20 billion over two or three years following the referendum in June 2016 is plausible, depending on how exactly you do the sums.

But it’s not obvious that there’s an easy alternative. Quitting the EU instantly without using the Article 50 process at all would be illegal. The Article 50 process envisages a two-year time limit before a country leaves, during which there will be negotiations over the terms of divorce. If Article 50 is to be used, continuing to pay into the EU budget—and receiving payments from it—during that period is inevitable.

On top of ongoing payments, EU officials are reportedly keen for the UK to pay a lump sum covering its budget liabilities beyond 2019—up to €40 billion, according to the Financial Times. The exact amount, if any, will be settled during negotiations.

About 1 in 7 German cars are sold in the UK

“I actually believe that we hold all the cards… there is a deficit, a trade deficit from the EU to us. Germany, the breadbasket of the EU, sells most of its cars in Britain. They desperately need to trade with us.”

It’s not true that Germany sells most of its cars in Britain, although it does export more cars to the UK than anywhere else.

But it is true that the rest of the EU sells more to us than we sell to them overall.

Last year, the Office for National Statistics says that we bought about £90 billion more in goods than we sold to other EU countries. At the same time, we ran a £20 billion trade surplus in services, selling more than we bought. So our overall trade deficit in good and services was about £70 billion overall.

On its own, the overall balance of trade doesn’t tell us very much about the balance of power in Brexit negotiations. For example, it doesn’t tell us about which industries our negotiators think are strategically important, or domestic priorities, or why.

There are lots of different ways to look at how much UK-EU trade is worth to each party, and what that means for who is most keen to agree on a trade deal. We’ve written about this in detail here.

The European Commission gives different figures for the UK’s trade with the EU, because it collects the data in a different way. It still says that the UK has a trade deficit in goods, a trade surplus in services and a trade deficit overall.

How many NHS trusts are in deficit?

Over the last few years mental health, ambulance, specialist and community trusts haven’t been in deficit, but the King’s Fund, a health think tank, suggests that this has led to a variation in care and service access.

David Williams, the Director General of Finance in the Department of Health, told a committee of MPs that in 2015/16 that being an NHS organisation in deficit became the norm.

The overall deficit of NHS trusts and foundation trusts at the end of the year was £2.45 billion. 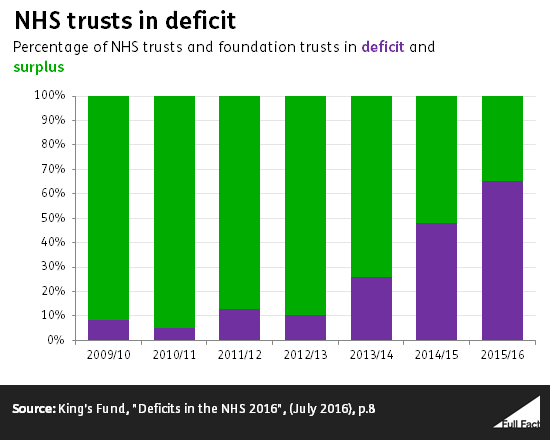 This year trusts are on track to have a lower deficit than they did last year, according to the House of Commons Library.

The aim for 2016/17 is to bring the overall deficit down to £250 million. NHS Improvement has estimated that this is more likely to be around £580 million, although other estimates put the figure higher.