80% of midwives intending to leave midwifery in the next two years said that increased pay would encourage them to stay in midwifery. That’s according to evidence from the Royal College of Midwives (RCM) published by the NHS Pay Review Body in 2017.

The RCM also said that the most common reasons given for leaving the profession overall were staffing and workload.

We should consider how this information was gathered. The RCM conducted a survey in August 2016 to determine why midwives leave the profession. They said, “The survey was sent by email to RCM members and promoted on the RCM social media streams. We asked midwives to complete the survey if they had left midwifery in the last two years or are intending to leave in the next two years. There were 2,719 responses in total.”

31% of those responses were from midwives who had already left, while 69% planned to leave in the next two years. 85% of respondents were based in England, 9% in Scotland, around 3% in Wales and about 3% in Northern Ireland.

And only 9% of those who had actually left said they left because they were not happy with their pay. When  asked what might encourage them to return appropriate staffing levels (88%), a change in workload (83%) , more support from management (81%) and a change in working conditions (81%) were all considered more important than increased pay. 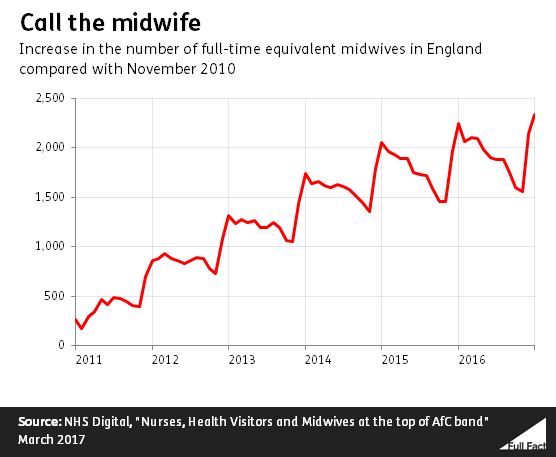 Overall the NHS Pay Review Body concluded: “we are concerned that, in too many places, the default strategy to deal with significant increases in patient demand within a slowly increasing budget is by expecting NHS staff to work more intensively, in more stressful working environments, for pay that continues to decrease in real terms. We do not consider this a sustainable position.”

How many jobs are dependent on the single market?

“650,000 jobs in London alone are dependent on the single market”

This figure, based on analysis from the Treasury, doesn’t say how many jobs are dependent on the single market. It’s the number of jobs thought to be linked to our exports with the rest of the EU.

The Treasury’s estimate for the whole of the UK was 3.3 million—the latest in a long line of similar estimates. They’re mostly based on looking at what proportion of an industry’s economic output is based on EU exports, and applying that to the number of jobs in that industry. It also adds in an estimate of how many jobs come about because of the increased demand for products thanks to exporters’ profits and their workers’ wages.

As the Treasury has previously made clear: “It is not an estimate of the impact of EU membership on employment”.

The single market also isn’t the same thing as the EU. The aim of the single market, broadly, is to make it easier for countries to trade by removing barriers to it. Countries like Norway, Iceland and Liechtenstein have full access to the single market despite not being members of the EU.

More recently, the government has said it intends to leave the single market, ending the free movement of EU nationals to the UK.

Even though the claim that these jobs are dependent on EU membership hasn’t been substantiated, this doesn’t mean some of those jobs won’t be at risk if trade becomes more difficult. One of the authors of the original research which produced estimates on this commented before the referendum that leaving "wouldn't mean an overnight loss of jobs; it wouldn't mean there would be a loss of prosperity instantly, just that the risks become greater."

How many journalists went to public school?

“51% of our journalists were public school educated, compared to 7% of the population at large.”

51% of leading journalists educated and working in the UK in 2015 were privately educated, according to the social mobility think tank the Sutton Trust. Another 30% went to grammar schools while 19% went to comprehensives. Looking at the same group of people the Trust also found that 54% went to Oxford or Cambridge University.

The Sutton Trust didn’t study all journalists in the UK though. It looked at who it considered were the top 100. It said this selection was “based upon deliberation by experts with professional experience.” The journalists were also selected based on “their perceived influence on the public debate, so are weighted towards the ‘commentariat’ in national newspapers, as well as newspaper editors.”

Across England 7% of school pupils went to an independent school in January 2017, this proportion has been the same for at least the last 15 years.

This proportion isn’t the same across the UK, for example in Wales it is much lower. 2% of pupils there went to independent schools in Jan 2016 (the latest figures available). In Scotland it was 4% in September 2016.

We’ve written more about education types in other professions here.