Question Time was in Kettering this week. The panel discussed a proposal to give every 25 year old £10,000; whether the UK should stay in the EU customs union; assisted dying; Donald Trump; and Labour’s local election results. The panel included the Work and Pensions Secretary Esther McVey MP; Labour’s Chuka Umunna MP; hip hop artist and writer Akala; Formula E boss and former MEP Alejandro Agag; and Chloe Westley of the Taxpayers’ Alliance. We’ve factchecked claims on youth unemployment, young people and tax, a survey on which country is the greatest threat to world peace, and several Coalition and Conservative policies relating to young people and education.

America: seen as the number one threat to world peace, says one survey

“A few years ago, I think it was 2014 but don’t hold me to that, Gallup which is an American polling company, did a global survey, 66 countries, over 100,000 people, so this was not just radical, crazy, leftist, and they asked people which country in the world was the greatest danger to world peace. This was before Trump came into office. 25%—24% to be precise—responded the United States of America.”

This widely-reported figure appears to come from a poll done by the WIN/Gallup International network of market research agencies.

It dates from 2013, when Barack Obama was President of the United States.

An archived press release tells us that “The US was the overwhelming choice (24% of respondents) for the country that represents the greatest threat to peace in the world today. This was followed by Pakistan (8%), China (6%), North Korea, Israel and Iran (5%). Respondents in Russia (54%), China (49%) and Bosnia (49%) were the most fearful of the US as a threat.” We’ve not been able to find more detailed results of the survey.

According to the press release, the questions were asked in 65 countries, to around a thousand people in each country.

Gallup International (not to be confused with the separate US polling firm Gallup) does not appear to have repeated the question more recently.

Is youth unemployment down 40%?

“Youth unemployment has come down by over 40%.”

It’s correct that youth unemployment is down by around 40%. The unemployment rate for 16-24s has fallen from 19.6% to 12% since the Conservatives entered government in coalition with the Liberal Democrats in 2010. 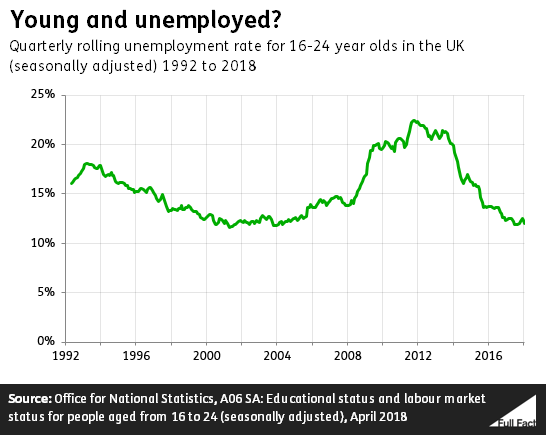 In the three months between December 2017 and February 2018 there were:

The Office for National Statistics notes: “It is a common misconception that all people in full-time education are classified as economically inactive. This is not the case as people in full-time education are included in the employment estimates if they have a part-time job and are included in the unemployment estimates if they are seeking part-time work.”

It’s wrong to say, as an audience member did, that 480,000 young people are excluded from these figures. It seems to be a misunderstanding of a report into a related issue.

The unemployment figures come from the Labour Force Survey done by the Office for National Statistics, which surveys 40,000 households and 100,000 people every three months to try to get a representative picture of employment in the UK.

Those same figures were used by campaigners to estimate that 480,000 young people are both “out of work and not claiming benefits” and not getting support from job centres. They describe these people as “‘hidden’ within ‘NEET’ statistics”.

‘NEET’ refers to people who are Not in Employment, Education, or Training. The report argues that “It’s also easy to assume that these young people will be receiving support through the benefits system and through Job Centre Plus”, but as not all of them are receiving support, those who aren’t can be described as ‘hidden’ from the support system.

Those 480,000 people are covered by the Labour Force Survey and included in the employment and unemployment statistics.

How much are young people taxed?

“The cost of living for young people is made more expensive by government intervention and that by taking less away from young people through the tax system, then you would help them save for things like a house.”

Taxes reduce the disposable income of young people, as they do for most age groups.

This can’t be looked at in isolation. Other government policies will have increased or decreased the cost of living for young people, without directly or indirectly taxing them.

In this piece, we’re focusing on the direct effects of the tax system. Taxes obviously have indirect benefits, like NHS or education services that taxes are spent on. There are ways to include estimates of these kinds of benefits, but here we’re just going to put the cash balance under the spotlight.

How much tax do young people pay?

The average household in which the main earner is under the age of 25 pays almost £9,500 in tax annually, according to ONS figures for 2016/17. This includes direct taxes (like income tax), indirect taxes (like VAT on goods.) They receive about £4,500 in cash benefits meaning the average household is taxed about £3,750 more than they get back in cash benefits.

A word of caution: the ‘average household’ is only a very broad measure, it won’t tell you about how that varies across the population, or show anyone’s individual experience. 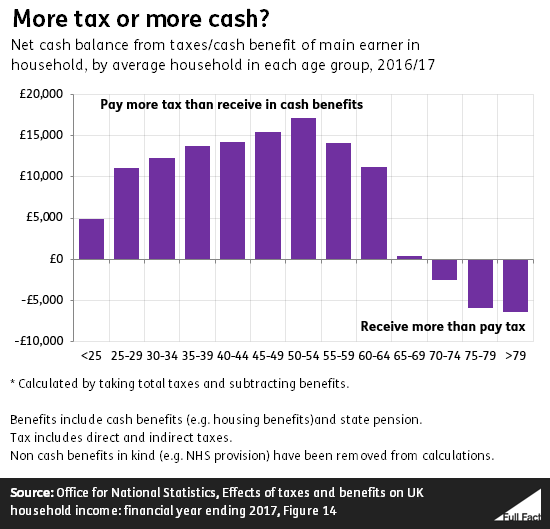 Meanwhile, households where the main earner is aged between 50 and 54 contribute the most—the equivalent of 39% of their household income in taxes. But they earn more than under 25s, because they have a higher income to start with.

Not all of the taxes people pay comes off their income. 50-54 year-olds usually have more wealth built up than younger people and as they spend this they’re likely to pay more towards taxes like VAT.

Taxes and benefits are the most direct way in which the government alters the spending power of young people. But many other policies also have an impact.

For example, the Help to Buy programme launched in 2013 tried to help first time buyers by offering favourable loans, mortgages and ISAs, but the IMF warned that the scheme could just inflate prices making housing more unaffordable.

On the other hand, price regulation in the energy industry for certain consumers has arguably reduced the cost of living for those consumers, without using taxes or benefits.

Sure Start, school building and tuition fees: the Conservative and Coalition record

“If I look at the journey of the young person in my constituency, from a child to becoming an adult—children's centres had to close due to the cuts the government made over the last eight years. Then you went to school, your building schools for the future project, renewing our school buildings, stopped. You then got to further education, education maintenance allowance was taken away from you and then if you made it to university, your tuition fees were trebled. That isn’t investing in young people, that is taking away from young people.”

Chuka Umunna correctly identified a number of Coalition and Conservative government policies relating to young people and education. In some cases, where the government stopped a policy, they also replaced it with a new one. We take a look at each of the policies identified, and their impact, in further detail.

This is not meant to be a complete assessment of the Coalition and Conservative record on youth and education. Rather, it looks specifically at the areas picked out by Mr Umunna.

508 children's centres closed in England between 2010 and August 2017, according to the government.

There are two types of centre included in these figures. Sure Start centres provide childcare, family support and health advice to local families, and have to meet a legal definition, whereas other “children’s centres” provide some of these services, but don’t meet the legal definition.

The Coalition government did end Labour’s “Building schools for the future programme” (BSF) in 2010, although it replaced it with its own scheme: “Priority School Building Programme” (PSBP).

By 2009, the National Audit Office reported that the speed of delivery would need to increase to complete the programme on time. “Fifty-four schools are due to open in 2009 and 121 in the following year. To start all secondary schools by 2020, the number of schools in procurement and construction at any one time will need to double over the next three years.”

In July 2010, the Coalition government announced the project would be frozen “In order to ensure that we do not waste any more money on a dysfunctional process”.

The Coalition government then announced its own programme (PSBP) in 2011. It aimed to rebuild and refurbish 537 “school buildings in the worst condition across the country” by 2021, and was expected to cost £4.4 billion in 2016.

In 2017, the National Audit Office found that on average schools built under the new programme “are one-third cheaper per square metre than schools built under” the previous one. There were some reported concerns “about what the Department has done to reduce costs (for example, decreasing the size of communal spaces)”.

Education Maintenance Allowance (EMA) was ended in England by the Coalition government at the end of the year 2010/11, and replaced by a new “16 to 19 bursaries” scheme. EMA is still available in Wales, Scotland, and Northern Ireland.

In England, EMA provided weekly grants to 16 to 18 year olds from low-income households, encouraging them to stay in education after the end of their compulsory years. In its final year these grants were worth £10 to £30 a week depending on household income.

In September 2011, the Coalition government replaced EMA with “16 to 19 bursaries”. These government-funded bursaries are “discretionary”, with schools broadly getting to decide which students are eligible, and how much to give them. Additionally, young people can receive a “vulnerable student bursary” of up to £1,200 per year if they are or have been in care, or are in receipt of certain benefits.

In 2012/13, government-commissioned research estimated that around 360,000 students received a discretionary bursary, and 24,000 received a vulnerable student bursary. This compares to around 640,000 receiving EMA in 2009/10.

Overall, the research found that the new 16 to 19 bursaries lowered participation among students who would otherwise have received either full or partial EMA.

It’s correct that the Coalition government trebled the maximum cost of tuition fees for students starting higher education in England in 2011/12. They rose from a maximum of £3,000, to £9,000. The maximum is now £9,250.

You can read more about the impact of this on access to higher education here.