How did Full Fact help secure the publication of housing and immigration data?

When we come across an unsubstantiated claim in the public domain, we push for the publication of the underlying evidence.

In April, the Sunday Times reported that the housing minister had been challenged to back up a claim he’d made publicly about house prices and immigration.

Our Factchecker Abbas Panjwani and Senior Policy Officer Cassie Staines walk us through the process that happened next, which helped transform an uncheckable claim into assessable statistics.

Where did you see the claim?

Abbas: The claim first appeared in a Sunday Times interview between the housing minister, Dominic Raab, and the paper’s political editor, Tim Shipman.

It said that "20% of house price rises over the past 25 years were down to immigration.”

The Times published a follow-up the next day, reporting that there was no supporting evidence to be found to back it up.

After seeing the media activity, we thought it would be valuable to factcheck the claim.

How did you check the claim?

Abbas: The factchecking process all begins with finding out where the claim has come from, and how it has been arrived at. I initially got in touch with the Ministry for Housing, Communities and Local Government (MHCLG) to ask them about where the data in the claim had come from.

They told us the figure came from an analysis that had been done by them – but that it wouldn’t be made public. We asked them if it was going to be made public at any time, and received no response.

I had a few clues as to where the numbers came from. The Ministry told us the calculations used a model developed by the National Housing Planning and Advice Unit, a non-departmental public body which looked at housing statistics. I also found a House of Lords briefing from 2008 on immigration in general, which appeared to use a similar model for calculation.

But there was still no published data, so we knew we wouldn't be able to say ‘yes this is claim is correct’ or ‘no, it isn’t’. The effects of immigration are notoriously complex to measure. The factcheck became about what help we could give people by providing context with the data available.

I contacted the independent immigration experts at Oxford University's Migration Observatory, and looked at academic research on the link between immigration and house prices. They showed there was no agreed consensus on the effects between the two.

I also found there had been a huge increase in house prices (by 320% or 137% after inflation), which I added into the factcheck.

The factcheck was released on our website, and it was then up to our Senior Policy Officer, Cassie, to carry out follow-up work to secure publication of the data.

What happened to finally secure the publication of the statistics?

Cassie: Once Abbas had asked the department for information and received no response, my job became about getting the information published as soon as possible.

We emailed the regulator, the Office for Statistics Regulation (part of the UK Statistics Authority), and asked them for their help in getting the source published. In fact, they were looking into it already.

They spoke to the department about it, and meanwhile our Director Will Moy was quoted in the Evening Standard arguing that the data needed to be published in full.

The department published the analysis a week later. The UK Statistics Authority wrote a letter to the permanent secretary of the department, Melanie Dawes, welcoming the publication. 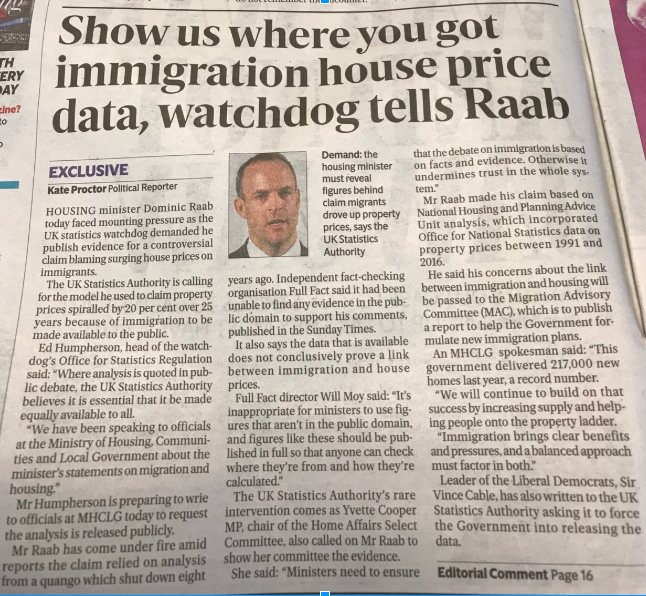 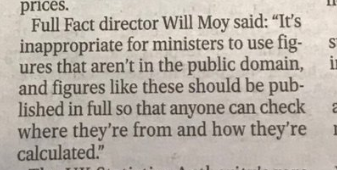 Did the data match the claim?

Abbas:  The government analysis did suggest that immigration had pushed English house prices up by 20%, but it also said that it wasn't meant to be a complete answer, and should be used with caution. So the way it was presented in the initial article took these figures out of context.

We could also see that, while immigration did affect the rise in UK house prices, it was relatively small compared to other factors like income growth.

Why is it important to support a claim with evidence?

Cassie: Information should be publicly available before or at the same time that it is used in an interview, on social media or some other public forum. We should always have equal access to information that’s used by politicians and public figures.

In this case, thanks to the article from The Times, this story remained in the public eye for slightly longer. This meant the publication of the analysis was reported in the media, and the minister even tweeted the data himself, which was a positive step for factchecking.

We aren't aiming to catch people out, but we want to make sure public debate is fair for everyone to judge for themselves. Please support our work and become a regular donor today.

When headlines aren’t quite as they seem