Here to lead not mislead

Dishonesty in British politics is dominating the conversation.

As of yesterday, the Commons Speaker, Lindsay Hoyle, granted a motion for debate so MPs could vote on whether to refer Boris Johnson for an investigation into whether or not he misled Parliament on attending parties in Downing Street when the country was under strict lockdown rules.

Such a parliamentary investigation would look at whether there was an intent to mislead. It shouldn’t have to get this far.

Dishonesty in politics goes further than the current news cycle. Back in November 2021, during Prime Minister's Questions, Boris Johnson claimed "There are now more people in work in this country [...] than there were before the pandemic began."

The next day, we published a fact check explaining that whilst there are more payrolled employees, the total number of people in paid work, including the self-employed, is below the level seen just prior to the pandemic.

Not only was this claim false, but the PM has also repeated it in Parliament on numerous occasions. 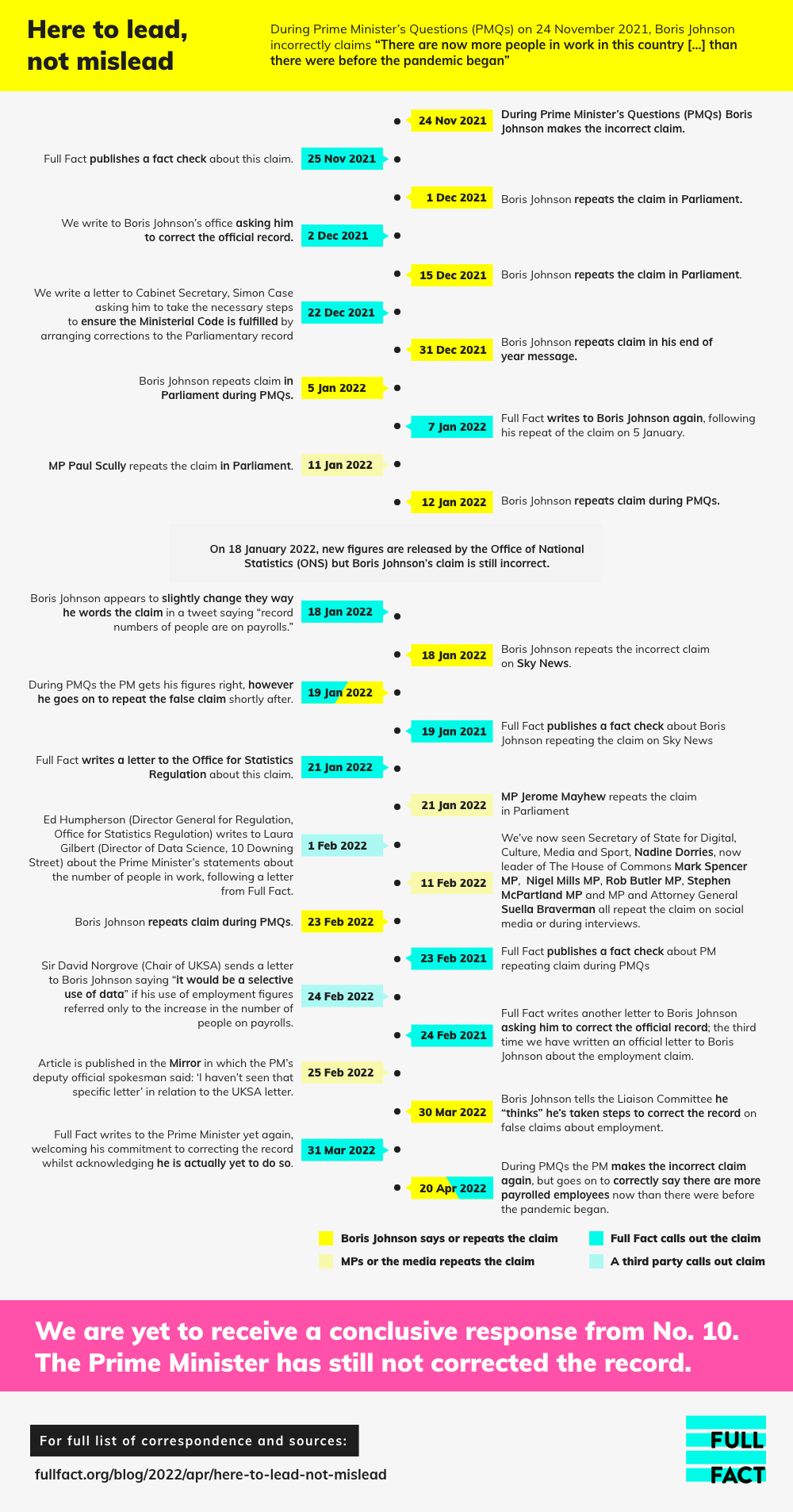 Before breaking for recess the Prime Minister acknowledged his error to Liaison Committee MPs, saying he “thinks” he has taken steps to correct the record.

As far as we can see on official records, no such steps have been taken.

We are yet to receive a conclusive response to any of our letters.

The Prime Minister has still not corrected the record.

Even in relation to inadvertent inaccurate claims, at Full Fact we know the current parliamentary corrections system is outdated and not fit for purpose. It only allows ministers to correct the official report of parliamentary debates, known as Hansard. It does not extend to non-ministers and therefore the majority of MPs have no official means by which to correct the record, including the Leader of the Opposition, Shadow Cabinet and high-profile MPs.

Even those who can correct the record, such as the Prime Minister and the Cabinet, choose not to, resulting in an erosion of public trust and perpetuating the idea that it’s acceptable for anyone to repeat bad information.

As a result misleading or false claims made in Parliament can be swept under the carpet or be repeated and find their way into wider discourse.

MPs must stop putting up with their peers misleading the House of Commons and in turn the public. The system is broken and in order to rebuild trust in our political system, change is needed.

Earlier in April, we launched our Honesty in Politics campaign, kicking off with a petition calling on all MPs to fix Parliament’s corrections system as a first step to rebuilding trust in politics.

Updated 21 Apr to include additional claims made by the PM in PMQs, 20 April 2022

We've written to every MP