This quote attributed to Boris Johnson is not real

Boris Johnson said "we have wiped out the national debt".

There is no evidence he said this.

It was this Conservative government that tackled the debt.

It was this Conservative government that tackled the deficit.

See the action we’ve taken as a result of this fact check.
1 of 3 claims

“It was this Conservative government that tackled the debt and the deficit left by the last Labour government.”

A tweet claiming that Boris Johnson said at Conservative Party conference that “we have wiped out the national debt” has been shared over 5,000 times. The quote has also been attributed to Mr Johnson in a Daily Express article.

But there’s no evidence that Mr Johnson said this.

The phrase is not in the pre-released draft of his conference speech. And we’ve reviewed subtitles of the speech itself, using Full Fact’s internal technology, which also show no mention of this claim.

Boris Johnson did say “it was this Conservative government that tackled the debt and the deficit left by the last Labour government”. But this is not the same thing as saying the Conservatives have “wiped out the national debt”.

In theory it’s possible that Mr Johnson made the claim somewhere other than during his keynote conference speech. But we’ve seen no evidence for that either.

There are only a handful of tweets which report Mr Johnson as saying “we have wiped out the national debt”, and the first one came from the Twitter user who made the claim we’re fact checking here. None are from journalists who were at the conference.

Additionally, Googling the phrase “we have wiped out the national debt” only returns repetition of that original tweet and no evidence Mr Johnson has ever used those words.

Since 2010 the debt has increased and the deficit has decreased

Although the claim attributed to Mr Johnson seems to have been fabricated, it’s worth examining what he did say in more detail.

He stated that “it was this Conservative government that tackled the debt and the deficit”. Government debt has continued to rise since the Conservatives came into office in 2010, but the deficit has fallen in recent years.

Government debt is the total amount of money the government owes from its borrowing over the years plus interest payments.

The deficit is effectively how much the government has borrowed each year.

The size of the government deficit rose significantly following the financial crisis in 2007/08.

Since 2010/11 (when the Conservatives came back into office as part of the Coalition government) the deficit has fallen in all but one year, which in turn means that the national debt has continued to grow, but at a slower rate. Whether you consider this to mean the government has “tackled the debt and deficit” is a matter of interpretation.

As the size of the economy tends to grow over time, expressing the deficit as a percentage of the UK’s gross domestic product (GDP) is the best measure, as it tells us how much was borrowed relative to the total value of goods and services made in the UK each year.

Government debt currently stands at just below £1.8 trillion, which is 81% of GDP. In May 2010 when the Conservatives came to office, it was worth £1 trillion or 64% of GDP.

It’s worth noting that a debt-GDP ratio of 81% isn’t that high by the standards of the last century, and it’s not necessarily a bad thing that a government has debt—almost all countries do. There is a debate among economists about whether there is a level of debt that is too high. 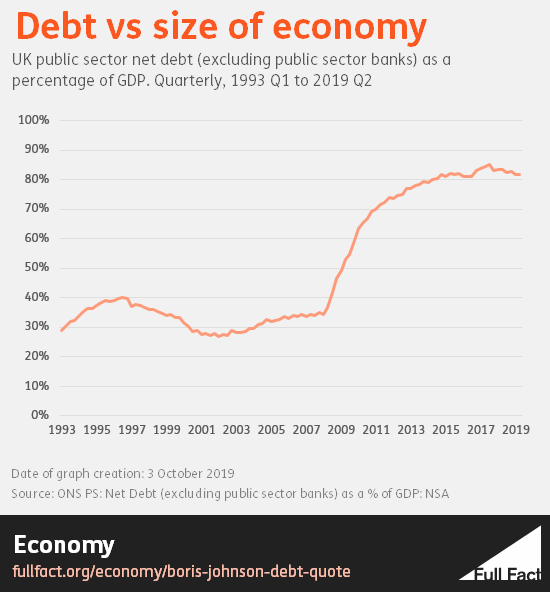