"John emailed me to say 'The Prime Minister solemnly declared on National television … shortly before the last general election that tax credits would not be affected' Is there any reason why this change has come about ...?"—Jeremy Corbyn

As we said last month, the Prime Minister appeared to promise not to cut child tax credit before the last election, but his wording was ambiguous.

The Conservatives claim he was referring to Child Benefit at the time. Labour also claimed the day after the Prime Minister made the 'promise' that "David Cameron is still failing to rule out cutting child benefit and tax credits again". So there was at least some ambiguity about what he promised.

After the election, the summer budget announced tax credit rates would be frozen and some entitlements to them were cut.

"[The steel industry] is in a very difficult situation. World prices have collapsed by more than half, and the surplus capacity in the world is more than 50 times the UK output"—David Cameron

This is close based on the best available figures, but it doesn't seem to be more than 50 times. The world's steel producers have the capacity to produce a lot more steel than is wanted. In 2013 there was over 500 million tonnes of extra capacity in crude steel and it's assumed around 580 million tonnes in 2014, although actual demand figures for this year and beyond don't yet exist.

So based on the current estimates and available figures, the world's surplus steel capacity is almost 50 times that of the UK's production, but not yet "more than" as the Prime Minister claims. Other members of the government have made the same claim but have said "almost" rather than "more than".

We've asked Number 10 for a source.

Not all foodbanks are run by the Trust, so these figures don't tell us how much use has risen as a whole.

We don't know how much of the rise in use is caused by a rise in need, as we've discussed before. The government has said the foodbanks are used more because there are more of them, and more awareness. But a government-commissioned report found that there is more demand, and new foodbanks are an attempt to meet it.

That's right. Tax credit spending rose under Labour as did the proportion of households in poverty with someone in work. 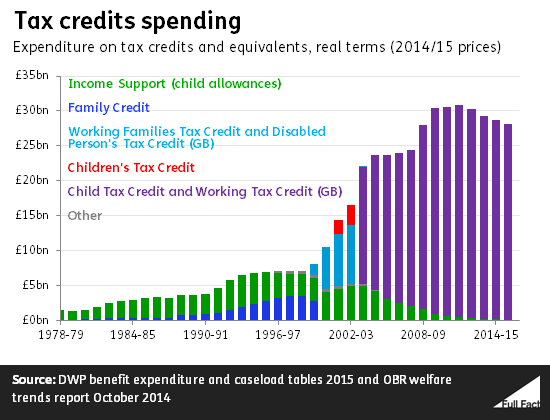 "We spent £5 billion on new school places in the last Parliament and we will spend £7 billion in this Parliament ... our birth rate is going up ... we therefore do not need the wide-scale immigration that we have had and need to make sure that the numbers are properly under control."—David Cameron

Currently, any increases in the number of school children caused by migration is more down to children being born to migrants in the UK rather than children migrating here each year.

A rising birth rate between 2001 and 2011 is the main cause behind the increase in pupil numbers (and so the need for more school places) and women born outside the UK living here helped to push this up as they tend to have a higher fertility rate and made up an increasing share of the population during this time.

We've got more detail on this in our factcheck.

That slump coincided with a recession. Production was at about 10 million tonnes or lower in each of the four years from 2009 to 2012, before rising again to 12 million in 2014. It's still not recovered to pre-recession levels (about 14 million tonnes were produced in 2008, which was still down on the 1997 peak).

Employment figures are harder to come by. The BBC has got hold of some from the International Steel Statistics Bureau (ISSB), which appear to show a fall from about 35,000 workers in the industry in 1997 to under 20,000 in 2010. So not quite a halving. The figure for 2014 looks to be at about the same level as 2010, as the Prime Minister says. We've asked the ISSB for the exact figures.

The reasons behind all this, as well as more recent closures and job losses, are multiple and complicated. We don't have space to go into them here but we recommend the House of Commons Library briefing on the subject.