Does the UK have lower unemployment than the Eurozone?

The UK unemployment rate is about half the Eurozone average.

Correct. The UK rate is 4.4% compared to the Eurozone average of 9.1%, using the latest comparable figures for April to June 2017. Some countries like Germany still have lower rates.

There are more people in work in the UK than for many years.

Correct. 32 million people are in employment, which is a near record level, as is the employment rate at 75%.

We've got more people in work than we've had for many years and an unemployment rate that's about half of the Eurozone average.

This is correct on both counts. The number of people in employment is at a near record level at 32 million, as is the employment rate at 75%. We’ve looked more into what kinds of jobs those are before.

The UK unemployment rate in April to June this year—the latest period we have comparable EU figures for—was 4.3%. That’s just under half of the Eurozone average of 9%. These figures cover people aged between 15 and 74. 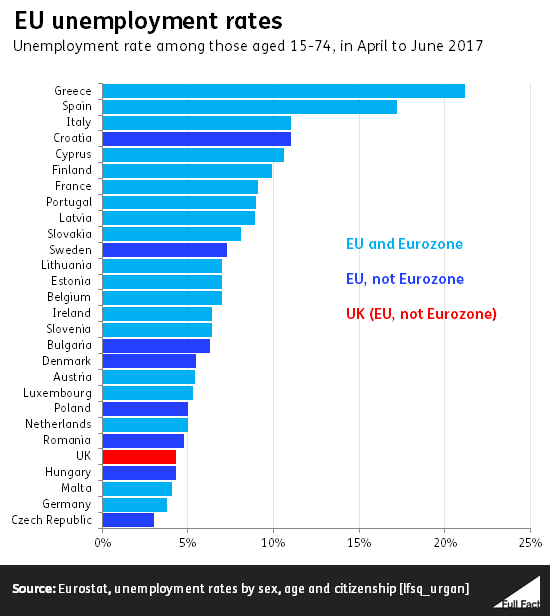 The UK has been doing much better in recent years compared to the Eurozone average than it has done for decades. The UK has always had a lower unemployment rate, coming closest in autumn 2011 when the UK rate hit 8.5%, with the Eurozone at 9.8%. Latvia and Lithuania weren’t part of the Eurozone back then.

Some countries with the Euro still have slightly lower rates. Germany, for example, has had a consistently lower rate than the UK since the 2009 recession. 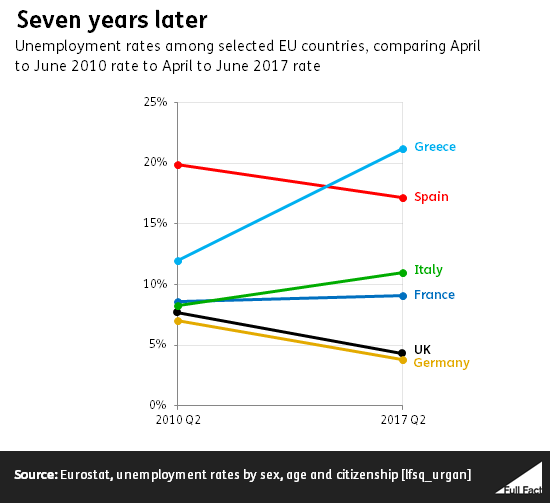 We've updated the piece to look at the unemployment rates for people aged 15-74, rather than 15-64. This results in slight changes to some of the rates mentioned.