Wages are rising at the fastest rate in a decade.

This ignores inflation which means it’s a bad measure to use. Average wages for employees in Great Britain grew around 2% over the last year in real terms, which isn’t the fastest in a decade.

“Wages are rising at the fastest rate in a decade.”

Chief Secretary to the Treasury Rishi Sunak told BBC Breakfast last week that wages are growing at their fastest rate in a decade.

This ignores inflation, which means it’s a bad measure to use. We’ve written about this before.

The problem is that failing to adjust for inflation (the rise in how much things cost over time) can give a misleading impression of how these statistics reflect people’s lives.

That means it’s more helpful to look at what has happened to pay in “real terms”—meaning the numbers have been adjusted to account for inflation.

In real terms, average weekly pay for employees in Great Britain grew 1.9% in the year to May 2019.

While this is relatively high compared to much of the last decade, wages were growing faster for periods in 2015 and 2016, and briefly in 2010. 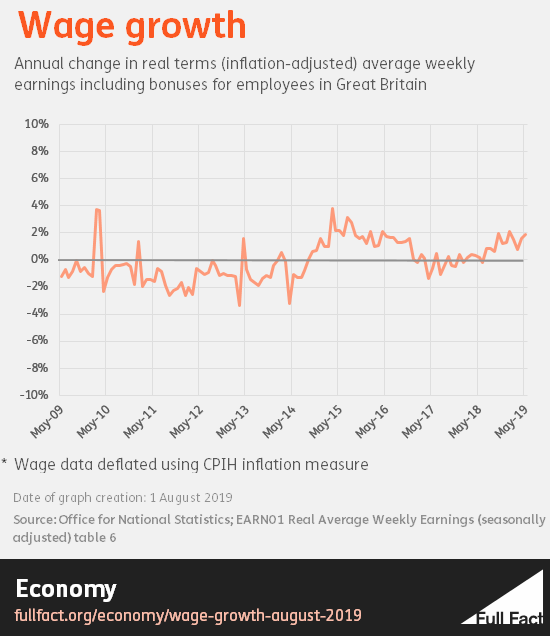 By Abbas Panjwani
Share this:Facebook Twitter
We aim for our fact checks to be as accurate and up-to-date as possible. If you think we've made an error or missed some relevant information, please email team@fullfact.org.