Is schools spending going to be at record levels?

The Conservatives are levelling up per pupil funding.

Per pupil spending on schools in England is set to increase over the next three years to roughly the level it was at in 2009/10.

The Conservatives are giving a record £14 billion to schools.

Once you account for inflation the increase between 2019/20 and 2022/23 is £4.3 billion in England. This isn’t a record increase in terms of spending per pupil (which is the most meaningful measure).

“We’re giving schools a record £14 billion, levelling up per pupil funding across the country.”

Earlier this month we wrote about a claim made by the government that spending on primary and secondary schools in England will increase by £14 billion over the next three years.

We said that, while it’s not technically inaccurate, it may well be misleading because it adds up multiple years of spending increases. This isn’t how people normally talk about spending increases, and it makes the figure seem comparatively much larger than it really is.

Last week the figure was used again in an ad campaign run by the Conservative Party (the ads have been deactivated following a separate article we wrote about how they seemed to alter the headline of a BBC news article).

As well as repeating the £14 billion claim, the ads made two new factual claims: that this is a “record” amount, and that this is “levelling up per pupil funding across the country”.

The proposed spending increase is not a record amount when you take into account inflation and rising pupil numbers (which is the most meaningful measure). Per pupil spending will increase to roughly the level it was at in 2009/10.

If you don’t adjust for pupil numbers, it’s hard to say whether or not the spending increase is a “record”, because we don’t have good historical data. It’s unclear exactly what the Conservative Party meant when it said “record” and we’ve asked it for more information.

What spending has been pledged?

The Conservatives outlined spending increases in schools in England which total £14 billion over three years.

This £14 billion figure isn’t the most helpful way of looking at the numbers and is potentially misleading for a few reasons.

So the best measure to use is real-terms per-pupil spending. The IFS has said that, by this measure, schools spending is going to rise by around 7.4% per pupil by 2022/23.

The IFS said “Since 2009-10, school spending per pupil has fallen by 8% in real-terms in England. The new spending plans should be near enough sufficient to reverse these cuts by 2022-23. In addition, the government is continuing to provide compensation to schools for higher pension contributions on top of this.

The term “record” could mean that the increase in spending is larger than schools have ever been given over a comparable time frame.

There is no good consistent data to judge school spending over time, so it’s hard to say whether or not £4.3 billion is the largest ever increase over three years.

However, as mentioned above, the best measure of school funding is the amount in real terms per pupil. Although the planned increase will be “large” as the IFS put it, it won’t be a record. Spending per pupil rose by 13.6% between 2004/05 and 2007/08. This was also a larger increase in absolute terms per pupil. 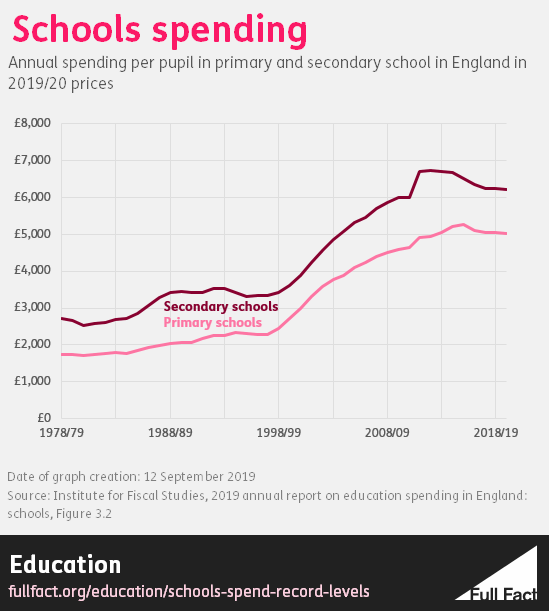 What else could "record" mean?

Alternatively, “record” could mean that following the government’s planned spending increases up to 2022/23 the total schools budget will be larger than they’ve ever been before.

That’s technically correct, but not very meaningful. It isn’t unusual for government budgets to get bigger year-on-year, as they tend to go up over time as overall spending increases and, in the case of schools, pupil numbers increase.

To get a better sense of how far that money can go we need to look at schools spending accounting for inflation and the spending per pupil.

As we’ve touched on, analysis published by the IFS shows that the per pupil spend in 2022/23 will be almost at 2009/10 levels, though not quite as high. 2009/10 saw the highest per pupil spend in any year since 2003/04, which is the furthest back the IFS were able to analyse comparable figures.