The Conservative manifesto promises 50,000 more nurses, although it doesn’t say when it aims to deliver this by or whether they’ll all be full-time.

According to reports since the manifesto launch, the 50,000 figure includes 18,500 existing nurses who will be encouraged to remain, or attracted to rejoin after leaving.

The party claims in their spending document the policy to retain, recruit and train nurses for the NHS in England will cost £879 million in 2023/24. (Health is a devolved area, so the UK government is only directly responsible for it in England.)

While it’s not clear how this has been calculated, that clearly isn’t the total cost of eventually having 50,000 more nurses on the NHS.

It’s difficult to be precise about how much nurses cost, but we can make ballpark estimates assuming they’re all full-time.

A newly-qualified nurse on pay band 5 can expect a salary of about £24,000 a year. But this isn’t what it costs to employ that nurse. There’s a lot more to the cost of employing someone than just their salary—you also need to consider things like national insurance and pensions, as well as the costs of giving them places to work and training them on the job.

Independent analysts estimate that once you add up the extra costs (excluding capital overheads), a band 5 nurse may cost around £53,000 a year.

That doesn’t include the cost of recruiting or training those nurses, which is a significant factor in how much such a policy would eventually cost. Estimates suggest over the expected lifetime service of a nurse, that could amount to around £8,700 a year.

Even without adding training costs, as a very rough indication, 50,000 nurses at pay band 5 cost the NHS in the region of £2.8 billion a year based on this estimate (or £2.6 billion excluding capital overheads). The actual cost will be higher as some move up the pay scale, and considering ongoing training costs as well.

In August 2019 (the most recent figures we have) there were roughly 287,000 full-time equivalent nurses and health visitors in the NHS in England. It’s unclear if this pledge also extends to health visitors so if you only look at the number of staff classified as nurses then there were about 281,000 in August 2019.

For both figures that’s the highest it’s been in any August over the last ten years. This pattern hasn’t repeated across all different types of nursing though, some areas, for example mental health nurses and learning disability nurses have seen their numbers fall over the last decade. 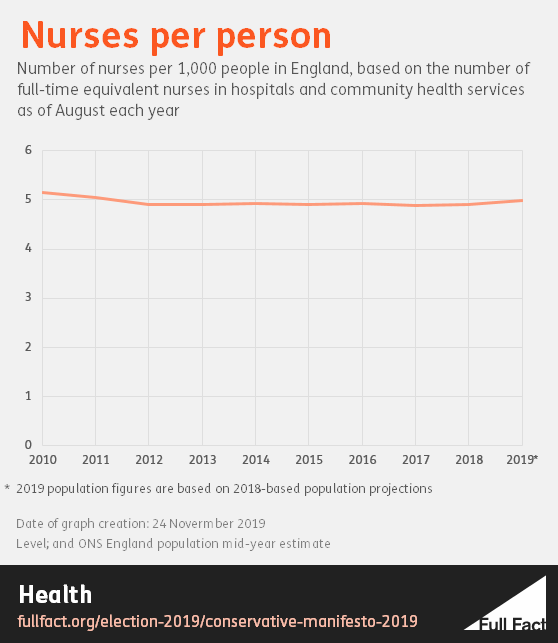 At the beginning of 2019 (again the latest figures we have) there were also 39,520 full-time equivalent nursing vacancies in the NHS in England, some of them filled by temporary staff. That figure had increased since the same time in the previous year when it was 35,794. Assuming that the vacancies didn’t continue to increase then the proposals by the Conservatives would in theory cover these vacancies with another 10,000 or so to spare.

As of June 2019 there were 34,113 full-time equivalent (FTE) GPs in England. FTE adds up the hours all GPs work to see how many full-time roles they make up. This number includes registrars, who are not yet fully qualified, and locums, who provide temporary cover.

GP numbers have stayed at roughly the same level since 2015 (as far back as the latest comparable figures go).

We can also look at GP numbers per head of the population. Analysis from the Nuffield Trust think tank which goes further back in time (but as a result of data changes should be treated with caution) showed that in England, there were 58 GPs per 100,000 people in 2018, down from 66 in 2009. This figure is a headcount and excludes registrars, locums and retainers (those on schemes to support people with a caring responsibility).

One of the key pledges that appears in the manifesto, to build “40 new hospitals”, does not appear to be costed in this manifesto, as most of them are not intended to be built during the next parliament. £2.7 billion was committed in September this year to upgrade six existing hospitals, while the remaining hospitals were allocated £100 million to develop plans for upgrades. But there is no money yet for any actual building work on these, and the scheme has “the aim of delivering between 2025 and 2030”.

The front cover of the Conservatives’ manifesto promises to “Get Brexit Done”: a phrase which appears 22 times throughout the document. Boris Johnson also said in the manifesto launch speech: “We’re going to get Brexit done with a deal that is pre-cooked, ready to go”.

The UK will stop being a member of the EU if Boris Johnson’s deal goes through. But negotiations with the EU on a future trade deal would then take place during a transition period, during which time the UK will still follow EU rules and pay money into the EU budget.

“Getting Brexit done” is a process, not an event. Boris Johnson is not wrong to say that his deal will get Brexit done, but it is simplistic. The Brexit process will not be completed by January.

The withdrawal agreement wouldn’t secure a trade deal with the EU—that would have to be negotiated during the transition period.

But this seems optimistic, as experts say extending the transition period beyond 2020 “may prove unavoidable”. It’s also worth noting that none of the EU’s other recent free trade agreements have been negotiated and provisionally implemented in under three years.

If the UK had not negotiated a free trade deal by the end of 2020, and then refused to extend the transition period, we would leave with no trade deal and start trading with the EU on WTO terms.

The Conservative manifesto also repeated the pledge, previously announced by the party that they would be “putting 20,000 more officers on the streets”. This would return the number of police officers to almost, but not quite, the total in 2010.

But because the country’s population has grown since 2010, the number of police officers per person has fallen by 19%.

All else remaining the same, recruiting another 20,000 police officers (assuming they were full-time) would leave the number of police officers per person 8% lower than it was in 2010, factoring in projected population increase and the government’s recruitment timetable. 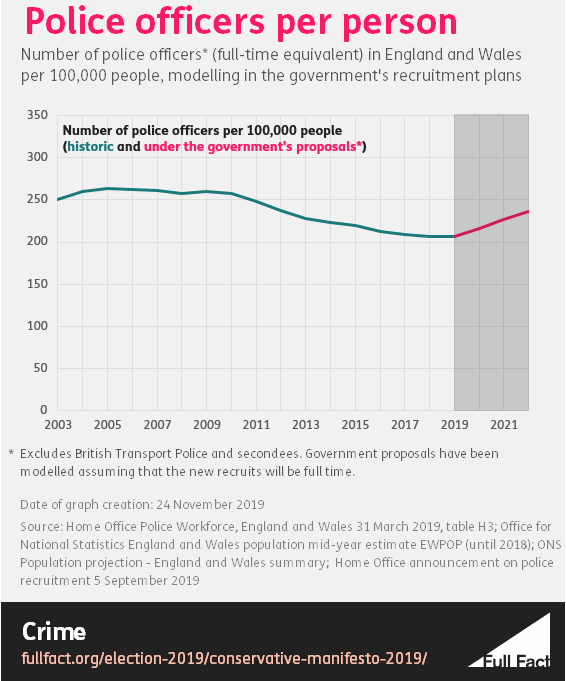 Since we originally published this article we've fact checked whether home building is up since 2010 and if one million new homes have been added to the housing supply in the last five years. This is correct and you can read more about that here.