If we Vote Leave... We will control our borders.

A vote to leave doesn’t necessarily mean we will control immigration. It depends on what the government chooses to do with immigration policy, and what arrangements it negotiates.

Impacts of immigration are likely to vary by local area. Immigrants may add to demand for and pressure on public services, but also contribute to financing and providing them.

Many migrants contribute to society.

Studies suggest recently-arrived EU immigrants contribute more to the public finances than they receive, although the effect is small.

More than a quarter of a million people came to the UK from the EU in the last 12 months – the equivalent of a city the size of Newcastle. If this continues for a decade, there will be over two million extra people.

Over a quarter of a million is correct according to official estimates, not quite as much as Newcastle’s population.

EU law means the UK can’t control the number of EU citizens coming to the country, but we can perform border checks and refuse entry to certain people. 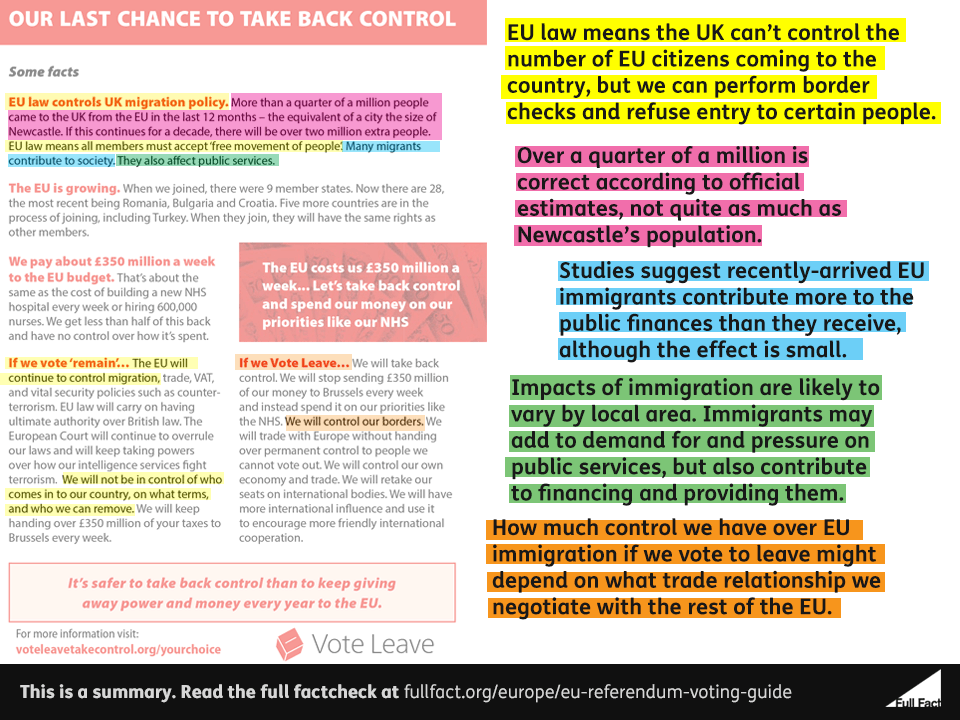 The UK can’t control the number of EU citizens coming to the country, so in that sense our migration policy is controlled by the EU. That’s been largely true since we joined, although the EU court has been important in extending its powers in this area. Control over immigration from other countries mostly remains in the hands of the British government.

But the UK can, and does, perform passport and identity checks at its borders and refuses entry to travellers who do not travel with valid identity documents even if they are from another EU member state.

How much control we have over EU immigration if we vote to leave might depend on what trade relationship we negotiate with the rest of the EU.

If we wanted to continue to participate in the EU single market after leaving the EU, we could join Norway, Iceland and Liechtenstein as members of the European Economic Area.

But free movement applies to EEA members, as it does to Switzerland, a non-EEA member with more limited single market access.

So controlling immigration might require leaving the single market as well as the EU.

Over a quarter of a million immigrants came from the rest of the EU in the year to September 2015, according to official estimates. Newcastle’s population is about 30,000 higher.

The article originally said: "If we vote to leave, this wouldn't automatically mean we will control immigration from the EU. It depends on what the government chooses to do with immigration policy, and what arrangements it negotiates."

We changed it to this to make it clearer: "How much control we have over EU immigration if we vote to leave might depend on what trade relationships we negotiate with the rest of the EU."