Partner visas and the EU

"A constituent is unable to bring his St Lucian wife of 12 years into the UK, because we have had to free up so much space for EU migrants."

Mr Hannan, a Conservative Member of the European Parliament, may be correct about the realpolitik of the situation. A government that wants to limit immigration, but can't limit much EU immigration, must attempt to limit non-EU immigration.

But that's a policy decision: there is no direct cause and effect between immigration from the EU and the situation of Mr Hannan's constituent. There isn't, for instance, any legal quota on the number of immigrants that can come into the country in a given year that has been filled by people from the EU at the expense of others.

Rules on visas for spouses from outside the EU

There are many reasons why someone might not be successful in getting a visa for their husband, wife or partner. But they may point the finger at new rules introduced in 2012, which made it harder. Sponsors of such a visa now need to have £18,600 a year, or the equivalent in cash savings—more if they also wish to sponsor children. Their partner's earnings only counts towards this total if they are already working legally in the UK.

There are different rules for people receiving certain disability, sickness and carers' benefits.

The aim of the policy was to ensure that such a couple wouldn't receive income-related benefits, so that migrant partners aren't a "burden on the taxpayer".

The House of Commons Library says that this was a significant change to the previous regime. Its chart shows some of the differences: 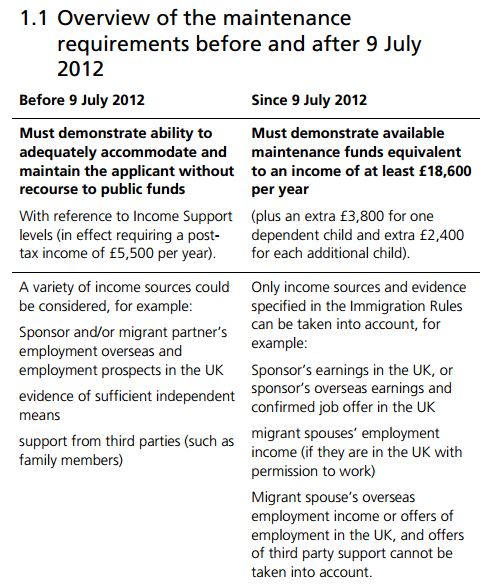 There is no formal relationship between these rules—or indeed any rules on family visas—and levels of EU immigration.

Net migration of non-EU citizens was 196,000 in the year to March 2015, according to the Office for National Statistics. The figure for people from the EU was 183,000. This gap has been much wider in recent years. 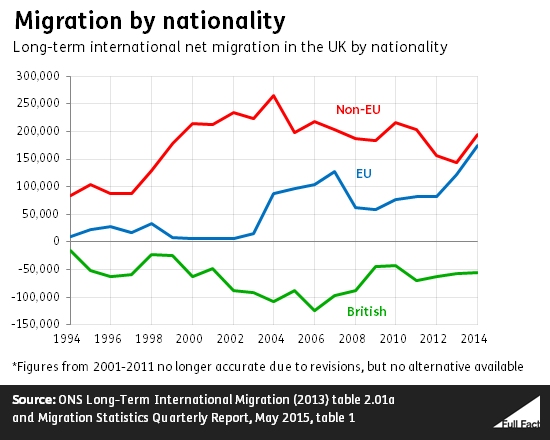 As we've pointed out before, EU migration isn't the cause of the government missing its target to bring net migration to below 100,000. It's consistently overshot due to non-EU immigration alone.