Over the past 43 years, the EU has taken control over more and more areas which don’t have anything to do with trade—such as our borders, our public services, and whether prisoners have the right to vote.

The scope of the EU has expanded, partly due to treaties that the UK has signed up to. It covers aspects of borders and public services but not total control. It covers prisoners voting only when it comes to European elections. 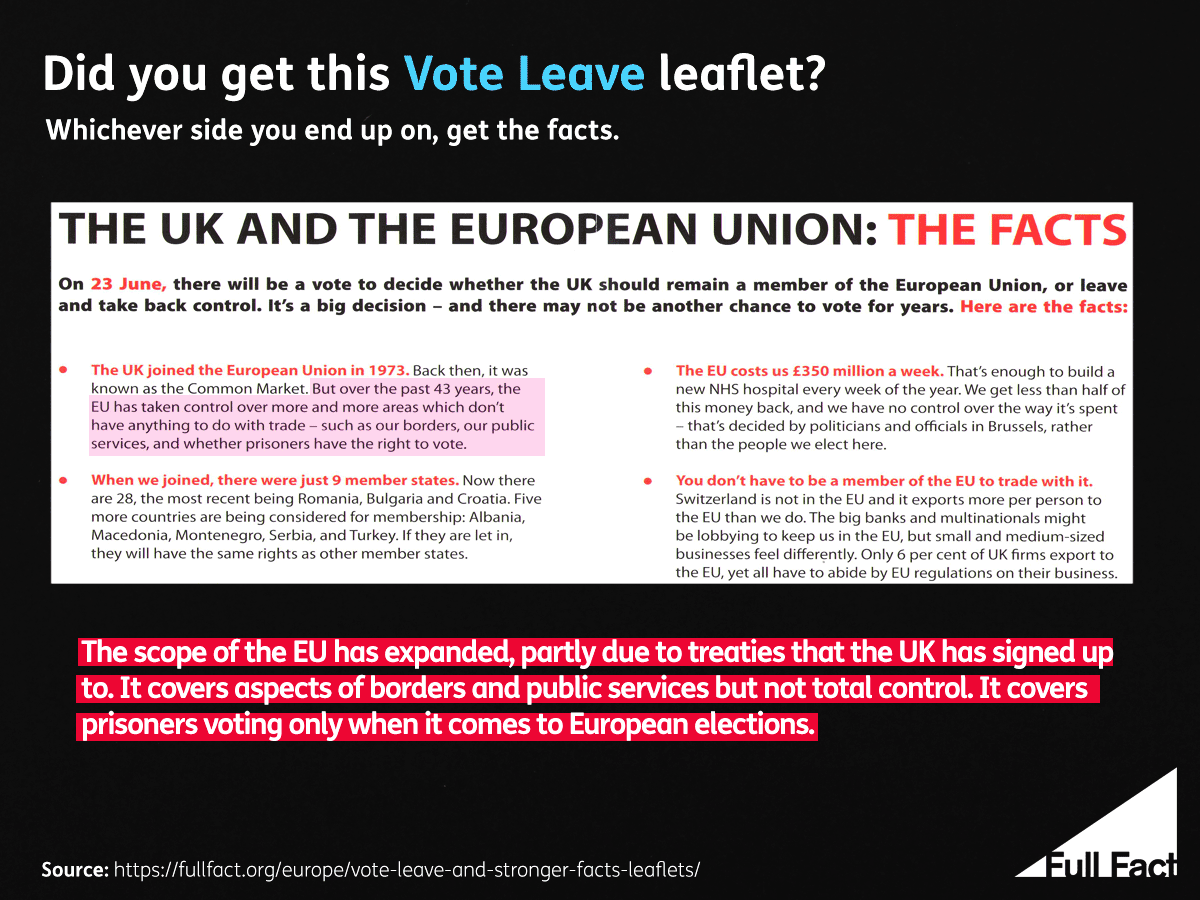 “Over the past 43 years, the EU has taken control over more and more areas which don’t have anything to do with trade—such as our borders, our public services, and whether prisoners have the right to vote.”

The EU doesn’t control UK borders, but does control important things about them. The biggest effect of EU membership on our borders is the free movement of citizens of any EU country into any other, but that’s been largely true since we joined.

The UK can, and does, perform passport and identity checks at its borders and refuses entry to travellers who don’t have valid identity documents even if they are from another EU member country.

On the other hand, the EU doesn’t control whether prisoners generally have the right to vote. The argument about that has mostly been with the European Court of Human Rights, based in the separate Council of Europe which has 47 countries as members, including Azerbaijan and Russia.

The EU court has ruled in a French case about voting for the European Parliament that might have implications for the UK’s ban on prisoners voting in those elections, but it remains in place for now.

Nevertheless, the EU does have some impact on aspects of public services.

There are perhaps three ways of looking at the level of influence the EU has over public services. You can look at EU treaties to see what the rules are. You can look at what difference it would make if we left, as the House of Commons Library has. And you can look at whether the status quo is working, as the previous coalition government did in its reviews of the ‘balance of competences’ in different areas between the EU and the UK.

The treaties are fairly clear. “[EU] action shall respect the responsibilities of the Member States for the definition of their health policy and for the organisation and delivery of health services and medical care” and “for the content of teaching and the organisation of education systems”. And they say that “the Treaties do not affect in any way the competence of Member States to provide, commission and organise non-economic services of general interest.”

So the EU doesn’t control the NHS, but it does control important things about healthcare. As the House of Commons Library notes, it regulates pharmaceuticals, the working hours of doctors, and public health issues like tobacco regulation, for example.

When the government surveyed the issue in 2013, it concluded that:

“the current balance of competence between the EU and the UK was considered by stakeholders to be broadly appropriate and that these competences are properly applied but that competence should not be extended further.”

At the same time it noted concerns about particular laws, such as the Working Time Directive, and potential for future decisions by the EU court that could impact on the NHS.

In education, similarly, the government’s ‘balance of competences’ review says: “the EU… has no authority over Member States’ laws concerning education, or over school, vocational or higher education curricula and examinations, or over the funding or organisation of education institutions and systems".

At the same time, the EU has become more interested in education over the years because of the link between it and employment, so while the basic picture hasn’t changed

“there has been some blurring of the boundaries”

The House of Commons Library has nothing to say about any impact of leaving the EU on schools But it does comment on the impact on universities, both in terms of students’ rights to study in other European countries, and because the EU controls significant research funding —around 16% of universities’ research income, or 2.6% of their total income.

Since joining the European Economic Community 43 years ago, the UK has signed up to five more “main treaties” which have extended the powers of what became the European Community and then the EU.

The EU’s own descriptions say, for example, that the Single European Act in 1986 extended qualified majority voting in the European Council, “making it harder for a single country to veto proposed legislation”, and that the Maastricht Treaty in 1992 introduced “elements of a political union (citizenship, common foreign and internal affairs policy)”.

Each was controversial in the UK, but each was also agreed by the UK, although not as in some other countries by a referendum. So the UK has repeatedly handed more control to the EU.

At the same time, both the health and education examples show that it’s possible for control to shift without treaty changes. That can be due to for example EU court decisions overriding national preferences, changes initiated by the EU, or member countries actually wanting the EU to take a bigger role.