The government will be putting more money into the NHS over the next five years, £394 million more a week.

No longer sending money to the EU means we will have money to spend on priorities like the NHS.

When the UK leaves the EU we won’t be sending vast amounts of money to the EU every year.

Our net contribution to the EU budget is typically £9-10 billion a year. We will no longer contribute to it from 2021 onwards, but other costs and economic effects associated with leaving are expected to more than offset that saving.

“When we leave the EU we won’t be sending, you know, the vast amounts of money to the EU every year that we do at the moment. That means we will have money to spend on priorities like the NHS… We’ve set out that we’ll be putting more money into the NHS over the next five years, and it will mean £394 million more a week more going into our National Health Service.”

“We will take back control of our money, by putting an end to vast annual payments to the EU. Instead, we will be able to spend British taxpayer’s money on our own priorities, like the extra £394 million per week that we are investing in our long-term plan for the NHS.”

In recent weeks, the Prime Minister has appeared on the radio and written a “letter to the nation” to put forward the benefits, as she sees it, of her Brexit deal. This has included references to an “extra £394 million per week” for the NHS, which she says the UK will have as a result of no longer having to send “vast amounts to the EU”.

There is no guaranteed extra money to pay for this increased NHS funding from stopping our payments to the EU budget. Other costs associated with Brexit are expected to outweigh the savings.

What is the government spending on the NHS?

Earlier this year the government announced that it would be increasing the amount of money going to the NHS in England by £20.5 billion in real terms by 2023/24. So in that year the budget will be around £20.5 billion higher than in 2018/19, once you account for forecast inflation (the way prices change over that time). 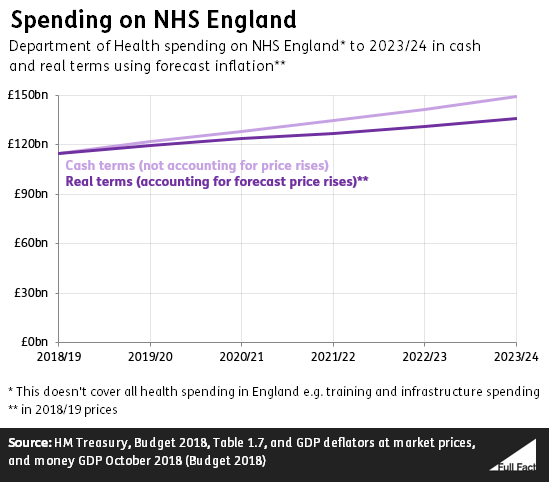 Another way of saying that is £394 million more being spent each week by 2023/24, compared to today. 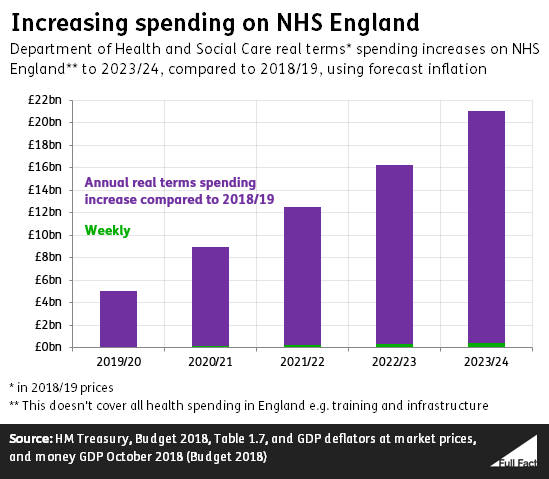 This money doesn’t cover all spending on health across England, it excludes things like public health and training, as well as money for buildings and other infrastructure. The total future health budget won’t be announced until next year so we won’t know what’s going to happen to those areas until then.

Health experts have said that “Unless further changes are made, the [Department for Health and Social Care] budget, excluding the NHS England and capital budgets, will fall by £1bn in real terms in 2019/20.”

Health spending is devolved so the UK government is only responsible for how much is spent on health services in England.

Will the money for the NHS come from Brexit?

Mrs May has suggested that post-Brexit this money for the NHS would come, at least in part, from money previously sent to the EU.

There is no guaranteed extra money—or ‘Brexit dividend’—as a result of the UK ceasing its contributions to the EU budget after leaving. The UK currently pays around £13 billion to £14 billion into the EU budget every year.

We get some money back in the form of EU spending on the UK. The government has already indicated that, until at least 2022, it will continue to spend some money on the areas where the EU currently gives us funding. So after factoring that in, when we stop paying into the EU budget in 2021, we’d likely have a “net” sum of around £9 billion to £10 billion left over each year.

However, other costs (for example, parts of the Brexit ‘divorce’ bill) and economic effects associated with leaving are expected to more than offset that saving.

Any extra funding given to the NHS or any other part of public spending would then need to come from increased taxes, increased borrowing, or reducing spending on something else.

We’ve written more about this here.