NHS spending is going to increase by 3.4% a year.

Correct according to the government’s latest plans to 2023/24 for the NHS in England. This is in real terms, taking inflation into account.

In 2017 Labour said a 2.2% increase in NHS funding would make it the envy of the world.

Labour’s 2017 manifesto pledged roughly 2.2% annual funding increases for the NHS in England for the rest of the decade. In the same manifesto they said they wanted to “restore the NHS to its place as the envy of the world”. They didn’t directly connect this to their specific pledges.

“Even Labour at the last election said that an increase of 2.2% would make the NHS the envy of the world. We'll be increasing spending by 3.4%.”

At the start of the week the Prime Minister announced an extra £20 billion for the NHS in England in real terms by 2023/24, which works out at spending increases of 3.4% per year on average.

At the 2017 election the Labour manifesto committed to “over £30 billion in extra funding over the next Parliament” [to 2021/22]. That would amount to “an average increase of 2.2% a year in real terms funding” for the rest of this decade, according to analysis by the Health Foundation. Similar figures were reached by the Institute for Fiscal Studies.

Labour’s manifesto also said at the outset: “Let’s build a country where we invest our wealth to give everyone the best chance. That means … restoring the NHS to its place as the envy of the world”. The party didn’t directly connect this to its specific spending plans for the NHS.

So the funding increases the NHS is now set to get are higher, at least in the first few years, than Labour’s plans at the last election.

But that’s only part of the story.

3.4% is also a lot more than the Conservatives initially pledged in 2017. Their plans were less generous than Labour’s, amounting to 1.2% per year until 2020/21 according to both think tanks. 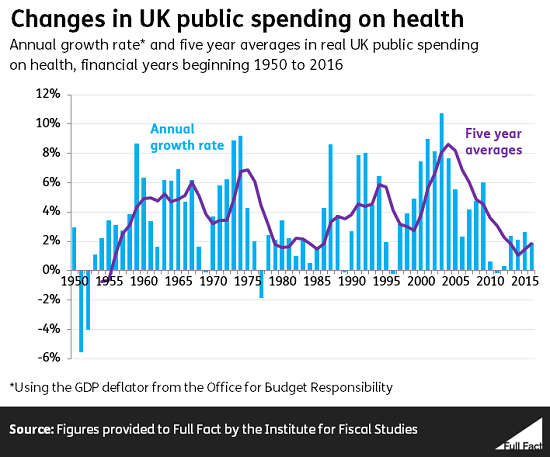 Even though Labour’s plans were more generous, neither party pledged enough funds to meet growing demands on the NHS. The Health Foundation said Labour’s plans would leave a £7 billion funding gap by 2020/21, while the Conservative plans would have left a £12 billion gap.

The latest 3.4% outstrips both of those, and will “help stem further decline in the health service” according to the Health Foundation. But they and other health think tanks say funding needs to increase by at least 4% a year in real terms in order to meet the NHS’s needs.

We’ve written more about this in our explainer on the government’s funding announcement.