EU immigration to the UK

In the year before the referendum, net EU migration was estimated at 189,000, so there’s been a large fall following the vote. We don’t know how much of that is a direct result of the decision to leave, but that and the Brexit process over the past few years has clearly had an impact.

Madeleine Sumption, from the Migration Observatory at the University of Oxford, commented:

“The overall story the data tell on EU migration is clear: Britain is not as attractive to EU migrants as it was a couple of years ago. That may be because of Brexit-related political uncertainty, the falling value of the pound making UK wages less attractive, or simply the fact that job opportunities have improved in other EU countries. EU net migration happened to be unusually high in the run-up to the referendum, so at least some of this decline would probably have happened anyway even without Brexit.”

Estimated non-EU net migration, meanwhile, is 261,000 a year—the highest level recorded since 2004. It has been almost consistently higher than EU migration for decades. 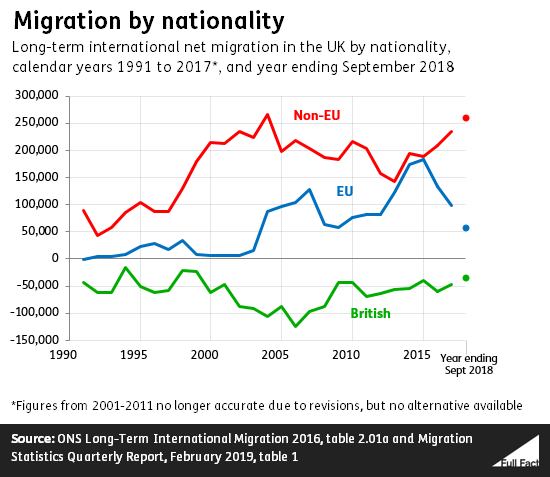 Fewer EU citizens are immigrating to the UK, and more are emigrating

The most recent set of figures published cover the year to September 2018.

Meanwhile the number of EU citizens emigrating has increased from an estimated 95,000 in the year before the referendum to 145,000 now.

The numbers are uncertain

These figures have a margin for error because they’re mainly based on surveys of passengers at airports. Net migration from the rest of the EU in any one year could usually be around 30,000 more or less than the estimates.

That means that small changes in immigration from one period to the next might not actually represent what’s really happening. With larger changes we can be more certain.

These figures also define immigrants and emigrants as people who change their country of residence for at least a year—which is called ‘long-term migration’. There are separate estimates for the numbers of people who come to the UK for less than a year.

There’s been controversy over whether long-term estimates accurately reflect immigration at all.

About four in ten citizens from other EU countries say they come with a definite job lined up. Others usually come looking for work, to study or to join family members in the UK. 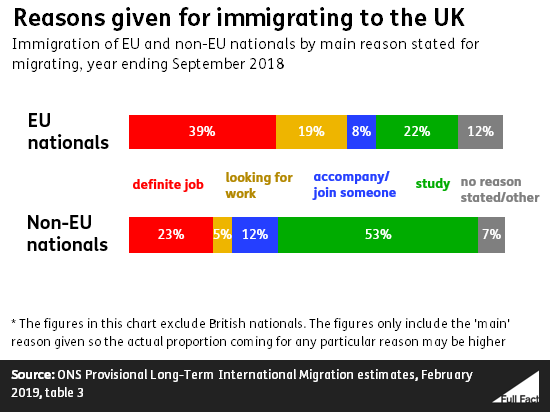 EU net migration was at historically high levels, but is now falling back

As the Migration Observatory at the University of Oxford points out, when the EU expanded in 2004, the UK was one of three countries which opened its borders straight away to workers from the new member states.

The new estimates for the year to September 2018 suggest EU net migration has now returned to a level similar to that last seen in 2009.

3.7 million EU citizens in the UK

Around 2.3 million nationals of other EU countries are in work, as of October to December 2018.

1.3 million people from the UK live in the rest of the EU

Figures for 2017 suggest that 1.3 million people born in the UK live in other EU countries. We’ve previously looked at all the estimates in detail.

We updated one of the figures in the 'reasons given for immigrating to the UK' graph from 41% to 42% to account for rounding error.