"The number of young people dying as a result of knife crime has gone down ... it's not only gone down it's been cut in half"

"Knife crime wasn't even measured under the previous mayor"

Viewers were treated to yet more heated debate between the main candidates in ITV's London debate this week.

At the end of the debate there were especially sharp (or should that be pointed?) exchanges over knife crime, with both Ken Livingstone and Brian Paddick claiming that it was up and a more sombre Boris Johnson asserting that youth fatailites had halved during his time as Mayor.

There have been a few notable occasions in which the current Mayor has apparently claimed that knife crime is down in London. However his campaign website does not mention knife crime levels among his 'achievements' except to point out that thousands of knives have been taken off London's streets.

Full Fact has already confirmed that knife crime has risen slightly during Boris Johnson's time in office. But do his more specific claims check out?

The claims made by Boris in the ITV debate yesterday mimic those in a press release issued earlier this month by Deputy Mayor Kit Malthouse. They are also a repeat of claims made during Mayor's Questions in the London Assembly from 22 February this year:

Len Duvall (Labour AM): "Knife crime with young people, is it up? Yes or no?"

Boris Johnson (Mayor of London): "As I said just now, very laboriously to James, there has been a significant reduction in deaths of young people from knife crime."

Knife crime is measured in several different ways in London. Knife crime offences overall are logged, but also available are figures on 'knife used to injure' which excludes more mionr offences such as the confiscation of knives. Boris's figures mentioned above look at a third measurement - homicide offences in which a knife has been used.

The Mayor's Office for Policing and Crime (MOPC), which recently replaced the Metropolitan Police Authority (MPA), provides data on 'teenage homicides', which cover offences logged where the victim was between 13 and 19 years of age. These figures are shown below:

The data for 2011 is, as yet, incomplete in the table. The figures are also provided only for calendar year, so the 2008 data cannot be fully ascribed to either Ken or Boris's administration.

Nevetheless, the figures show that between 2008 and 2011, teenage homicides involving a knife halved from 22 to 11 offences. It should be noted that the actual numbers are very small, so we can't read too much into the trends, but they do by-and-large lend support to Boris's claim.

But what's the bigger picture?

Of course it is noticeable that Boris did not directly answer Len Duvall's question in the London Assembly about whether knife crime among young people overall - not just fatailities - is up or down.

However the Labour Party provides the below table which it claims is a release from the Met Police in February, although Full Fact was unable to find the original release itself. The figures themselves were reported by the Daily Mirror, which references them as knife crimes specifically (although this isn't explicit from the table itself).

But what about the trends in knife crime among people of all ages? Metropolitan Police data on this is more easily available. Figures for knife crime offences overall and those just involving injury are available from the London Datastore. Full Fact charts them below: 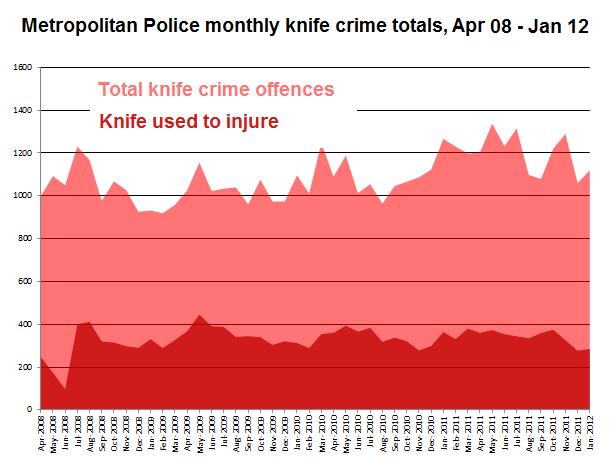 The monthly statistics show that the increase in overall knife crime is slight but noticeable since 2009. The number of knife injuries is however broadly the same as it was four years ago.

Was knife crime not measured under Ken Livingstone?

The same press release from Kit Malthouse that we referenced earlier indicates a slight exaggeration on Boris's part during yesterday's debate. The Deputy Mayor, in the press release, instead of saying that is wasn't measured at all, instead claims:

Mr Malthouse cites a spreadsheet compiling recorded crime statistics for over one hundred different offences since 1990. The data shows that "possession of article with blade or point" only began to be recorded from the financial year 2008/09 onwards.

Evidence that 2008 was the first year in which knife crime injuries were properly measured is also evidence in a Freedom of Information response from the Met Police, which mentions:

"the feature code 'knife used to injure' was only introduced into the CRIS system in July 2008 ... to find the number of crimes that have occurred between January 2005 and July 2008 where a 'knife was used to injure' would require manually reading the free-text details pages on CRIS reports for all knife crime offences between that period."

The earliest published statistics available to Full Fact also verify that April 2008 is the earliest date for which comprehensive data is avaialble.

So it is incorrect to claim that knife crime was not measured at all under Ken Livingstone, and indeed the measurement was introduced under his administration.

It is however valid to say that it wasn't measured for the vast bulk of his time in office, but viewers might be tempted to take away from this that Boris was responsible for this change, when in fact he wasn't.

Boris Johnson's figures on teenage homicides due to knife crime are correct, although they miss a broader picture. Youth knife crime overall appears to be up under Boris, along with knife crime offences overall.

However the story seems to be that, while knife crime offences have increased, the number of fatalities have decreased under Boris Johnson.

You can find out more about the Met Police's definition of knife crime in this document.