This image on benefits for pensioners and refugees is not correct

British OAPs who have worked for 45 years get a total yearly benefit of £6,000.

A British pensioner with 45 years’ worth of national insurance contributions is likely to get at least £500 a year more than this, and be eligible for more benefits on top.

Refugees or illegal immigrants living in Britain get a total yearly benefit of £29,900.

Illegal immigrants cannot collect benefits, and refugees can on the same basis as UK nationals once their request for asylum is granted—but this figure is unusually high.

An image claiming that ‘illegal immigrants’ and refugees can claim a much larger yearly benefit than British pensioners has been shared over 2,000 times on Facebook. 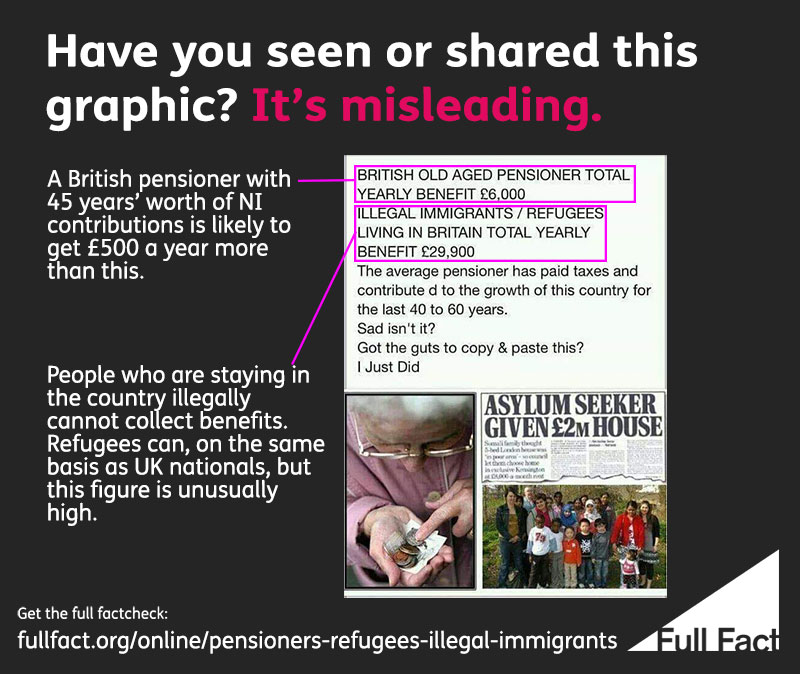 In 2015, the House of Commons Library wrote about a similar claim circulated via email that quoted the same figures with slightly different accompanying text. The library said “The figures quoted bear no relation whatsoever to the situation in the United Kingdom”.

The House of Commons Library said the claim may have originated from a similar message circulated in Australia.

The government there subsequently debunked it, but there have also been similar versions in Canada and India with some details changed.

We’ve factchecked a similar set of viral claims on the benefits pensioners and refugees are eligible for here.

British pensioners who have worked for 45 years are likely to get a minimum payout of £6,500 a year, so more than the number in the picture. Those who are staying in the country illegally aren’t eligible for benefits. People in the process of applying for asylum may be eligible for a cash payment or housing, and although refugees can claim the same benefits as UK nationals once they’ve been granted asylum, the figure quoted is unrealistically high.

How much can these groups actually collect?

The image mentions a “total yearly benefit” for pensioners, which looks like it is referring to their pension.  Pensioners can also be eligible for other benefits, like winter fuel payments, means-tested benefits like pension credit, and a free TV license.

The image mentions this pensioner has worked for 45 years, so we can assume they have the 30 qualifying years of national insurance contributions or credits in order to get the full amount.

If the pensioner was born after those dates, they can claim the new state pension, which is £164.35 in full, which per year is around £8,500. People need to have 35 years of national insurance payments to qualify for this full amount. This excludes any protected payments, which is extra money older workers entitled to the new state pension may have amassed under the old system.

Regardless of when they were born, assuming this pensioner has worked for 45 years, they have 45 years of national insurance contributions and could be eligible for more than the £6,000 a year claimed.

What can ‘illegal immigrants’ claim?

People who are staying in the UK illegally cannot claim any benefits.

In its debunking paper for the email, the House of Commons Library defines illegal immigrants as those who entered the UK unlawfully or stayed in the country once their visa had expired.

Those in the UK without legal status are likely to be removed if their immigration status is discovered by the authorities. They inherently do not have the right to work in the UK and we don’t have figures for those that do so anyway.

As a result of the Welfare Reform Act 2012, only people with the right to work in the UK can collect national insurance contribution based benefits like jobseeker’s and employment and support allowance, and work related benefits like statutory maternity pay.

People subject to immigration control (who require leave to remain in the UK but don’t have it) are also prevented from collecting payments like housing and child benefit, and universal credit.

What can refugees claim?

The term refugees usually refers to asylum seekers whose applications for asylum have been successful. According to a House of Commons research briefing, refugees “are able to claim social security benefits and tax credits on the same basis as UK nationals”.

That means they would theoretically be eligible for the same kinds of pensions as the British pensioners described above would, although aren’t as likely to have built up the required national insurance contributions if they arrived in adulthood.

The £29,900 figure quoted in the image is unusually high—the benefits cap means the maximum payment of certain types of benefits to a couple or single person with children in London is £23,000 per household. Some people are not affected by the benefits cap, for example, people getting Universal Credit because of a disability or health condition that stops them working.

Refugees in this image may refer to asylum seekers who are still awaiting a decision on their asylum application to remain here. To be eligible for asylum, someone must be unable to live safely in their country out of fear of persecution because of characteristics like race, religion or political opinions that put them at risk there.

Asylum seekers who are waiting for a decision are not allowed to claim mainstream non-contributory social security benefits, and are not usually allowed to work either.

But they may be eligible for asylum support from the Home Office if they are destitute, which the House of Commons library described as “less generous than social security benefits” in a briefing.

This support can consist of somewhere to live (which they cannot choose and is unlikely to be in London or the South East), plus £37.75 per person in the household a week. We’ve written more about what asylum seekers can claim here.

This article is part of our work fact checking potentially false pictures, videos and stories on Facebook. You can read more about this—and find out how to report Facebook content—here. For the purposes of that scheme, we’ve rated this claim as mixture as the primary claims are misleading.