This comparison of pensions in different countries is misleading

The figures for the UK, Spain and France are in the right ballpark in terms of the maximum available in each country, but differences between their pension systems means it’s not a fair comparison.

A post claiming that UK retirees receive much less in state pension than people in France, Germany and Spain has been shared over 5,000 times on Facebook.

We’ve seen a similar claim circulating before, which stated each of these figures is the maximum available for pensioners in each country. In the case of the UK, France and Spain, the figures are in the right ballpark for the maximum amounts available from state pensions.

But like then, these figures are misleading, because the countries’ pensions systems are different.

We’ve written about this issue is more detail here.

The source of these numbers isn’t clear

The closest match we found in the past was this table from a Which? article published in 2013. This shows figures very close to the ones in the Facebook post (but in annual terms rather than weekly).

Both the OECD and the International Social Security Association (ISSA), are cited as the source of the numbers. The OECD told us    they were not the source of the monetary figures, and the ISSA told us the figures didn’t seem to be sourced from them directly.

Comparing pensions between countries “is complicated by substantial differences in the structure of pension systems across the developed world”, according to a recent House of Commons Library analysis.

Some comparative figures can give the impression that UK pensioners are considerably worse off in retirement than those in other advanced economies. That’s because UK pensioners get a much higher proportion of their retirement income from occupational pensions or personal savings, as opposed to state pensions and benefits. 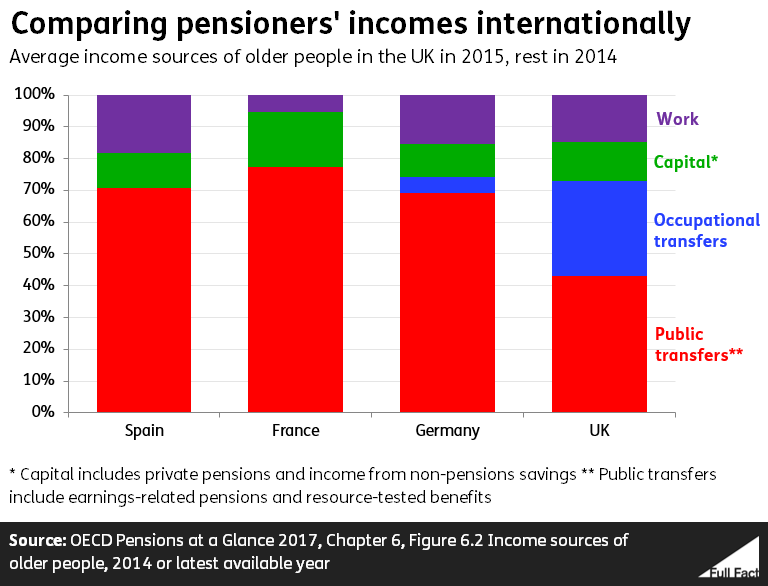 When you just look at public pensions and benefits, UK pensions are considerably lower than those of other major advanced economies.

All the countries listed in the graphic generally have higher public spending on old-age pensions as a proportion of GDP (the size of their economies) than the UK does    . Using figures for 2015, the equivalent of 5.2% of UK GDP went into public spending on pensions, compared to 7.7% in Spain, 7.9% in Germany and 12.1% in France.

Those figures are just counting pensions and benefits provided by the state, not occupational pensions or voluntary savings people make.

But that’s only one part of what people get through a pensions system. It doesn’t properly factor in how people’s lifetime earnings can affect their pension entitlements.

UK pensions are relatively low on this measure as well. If you just consider mandatory public and private pensions, an average UK pensioner’s income is worth 29% of their earnings at retirement, compared to 51% in Germany, 75% in France and 82% in Spain.

But pensions in both the UK and Germany tend to get top-ups from voluntary pensions, which pushes their ratios to 62% for the UK and 65% for Germany when included (with the other countries staying the same).

This article is part of our work fact checking potentially false pictures, videos and stories on Facebook. You can read more about this—and find out how to report Facebook content—here. For the purposes of that scheme, we’ve rated this claim as mixture because the figures are in the right ball park but the pension systems differ so widely that it’s not a fair comparison.