The number of police officers in England and Wales fell by just under 19,000 between September 2010 and September 2016, and just under 21,000 comparing back to March 2010, before the general election that year.

There were almost 123,000 police officers in September last year. Counting those from the British Transport Police and those on secondment it was 126,000.

This relates to the number of full time equivalent officers (or how many there would be if you added up all their hours to make full time roles).

The number of police officers in England and Wales is around the level it was at in 2000 (that’s if we look at how many police officers there were in March last year, which lets us compare further back in time). 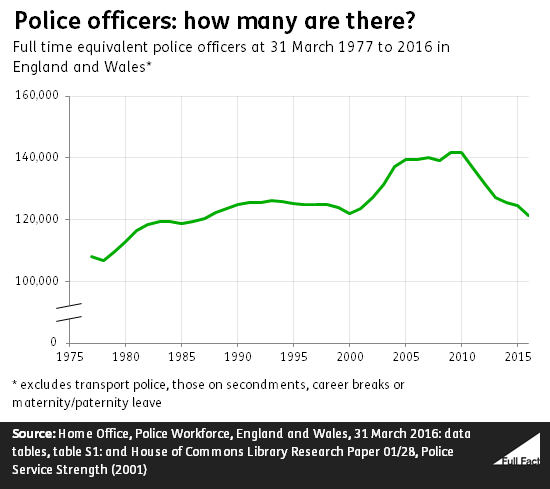 Policing is local too, though. If you live in Merseyside, you might not care what’s happening to police numbers in Gwent.

The staffing picture varies across the 43 police forces of England and Wales. The number of officers working for Surrey Police has actually risen by 3%. Every other force has lost officers, with Cleveland seeing the biggest drop (-27%). You can check your area by looking at table A1 of this House of Commons Library research.

You might also care about the number of frontline officers. There’s no hard and fast notion of who fits that description. The official definition has changed several times. At the moment, officers are categorised as one of frontline (like response teams, neighbourhood policing and front desk roles), frontline support (such as intelligence) and business support (such as training).

Using that breakdown, there are 14% fewer ‘frontline’ officers since 2010. But the proportion of all officers who work on the frontline has risen a little, from 91% to 93%. 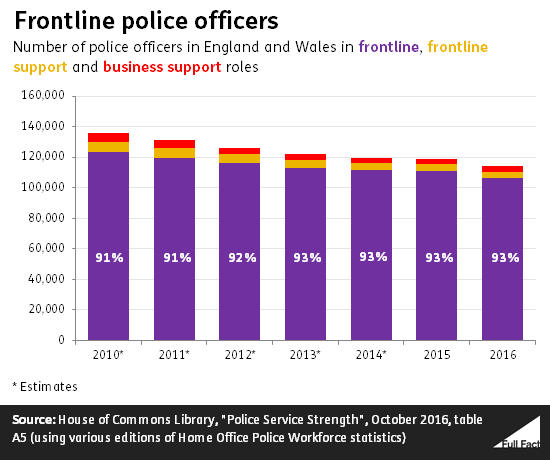 Again, that varies. In March 2016, Staffordshire Police had 96% of their officers on the front line, compared to 90% for Greater Manchester.