Is bingo on the decline?

"Eight years ago there were 600 [bingo halls]; now 380 survive, according to the Bingo Association."

Yesterday, the oft-used term 'Budget bingo' took on a whole new meaning. The Chancellor announced as part of the Budget that taxes on bingo halls are being halved from 20% to 10%.

Today, the spotlight has fallen on Labour's bingo record. While the Bingo Association's figures suggest a steep decline over six years, this isn't reflected in the number of licensed premises, which suggest a slower recent decline. Long-term figures are hard to come by, but those that do exist suggest a long-term decline as well.

The Bingo Association confirmed that, on its measure, there were 585 bingo clubs in 2005, compared to 383 now. But this doesn't refer to every place in the country in which bingo takes place. The number of licensed bingo premises, which includes places like working men's clubs and holiday parks, isn't falling by as much. As at September last year, there were 668 licensed bingo premises in the UK.

Going back in time is more tricky. Figures from the Gambling Commission only go back to 2009, and earlier figures are in scattered places. Here's what we know: 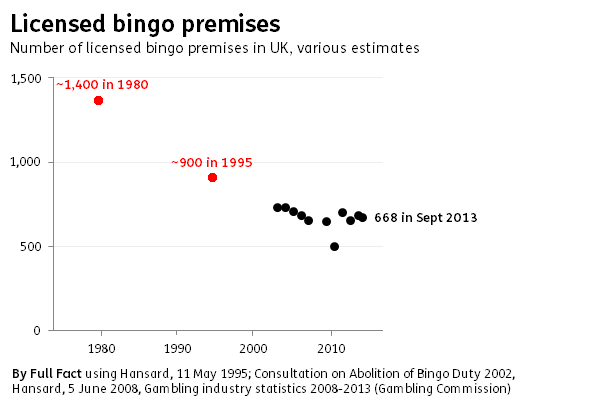 So there's evidence of a long-term decline in the number of bingo premises in the UK, and this isn't specific to the previous government.

It's also possible to look at matters from the Treasury's perspective. The Treasury makes £75 million per year from bingo duties - which are paid as a proportion of the gross profits of the provider (but doesn't include domestic, small-scale, non-profit or machine bingo).

Less clear that people are stopping

There are no detailed figures we know of to show how many people are playing bingo. In 2010 it was estimated that 12% of women and 6% of men played bingo in the past year. This was little different to the same results in 2007 and a decade earlier in 1999.

The Bingo Association has confirmed its figures for bingo clubs in 2005 and at the present day, which we've incorporated into the article.