Post-referendum predictions: have forecasts for the economy changed?

The average forecast for UK GDP growth this year was the same September as in June, despite the UK voting to leave the EU.

This is correct, but it isn’t the whole picture. Yes, the average forecast for UK GDP growth in 2016 was the same in September as it was in June. But the types of goods and services predicted to make up that growth was different.

On average, they expect growth to continue at exactly the same rate as forecast before the EU referendum.”

It’s correct that the average forecast for economic growth in 2016 was the same in September as it was in June, according to a compilation of independent economic forecasts published regularly by the Treasury.

But economic forecasters don’t think that the vote to leave has had no effect on the UK economy.

Even though the average forecast for economic growth was the same overall, the balance of goods and services predicted to make up that growth was different. Notably, the forecasters expected lower investment and higher exports than they did in June.

Economic forecasts involve a lot of assumptions. As we’ve said before, they’re better treated as carefully weighted judgements rather than facts. Forecasts always come with a lot of uncertainty.

What’s more, you can’t factcheck the future. In this factcheck we’re not saying what’s going to happen to the economy, we’re just describing the balance of opinion amongst economic forecasters.

Gross Domestic Product (GDP) is the value of all goods and services produced in the UK. It’s a measure of the size of the economy.

New economic forecasts made in the month before the referendum predicted that GDP would grow by 1.8% in 2016.

Most forecasts argued that a vote to leave the EU would have a negative impact on economic growth straight after the vote, even before the UK actually left. So in the two months after the UK voted to leave, the average prediction for economic growth was lower, at 1.5% in July and 1.6% in August.

But new forecasts made in September also predicted that GDP would grow by 1.8% in 2016, the same as in June, despite the fact that the UK voted to leave the EU.

The average forecasts for different parts of GDP have changed

This wasn't a simple backtrack. Growth forecasts for some parts of GDP have risen, whilst others have fallen.

The biggest increase in forecast growth was for exports, probably because the fall in the value of the pound has made UK goods and services cheaper for foreign buyers. The average forecast for the growth in UK exports was 0.8 percentage points higher in September than in June, rising from 1.6% to 2.4%. Meanwhile, the average forecast growth in imports fell 0.1 percentage points, from 3.1% to 3.0%.

The biggest fall has been in the expected growth in long-term investment in things like machinery and buildings. The average forecast for growth in fixed investment for 2016 fell by 1.7 percentage points from 1.5% to -0.2% between June and September. Probably, this is based on the assumption that triggering Article 50 will create a lot of uncertainty and businesses won’t want to commit to big investments. 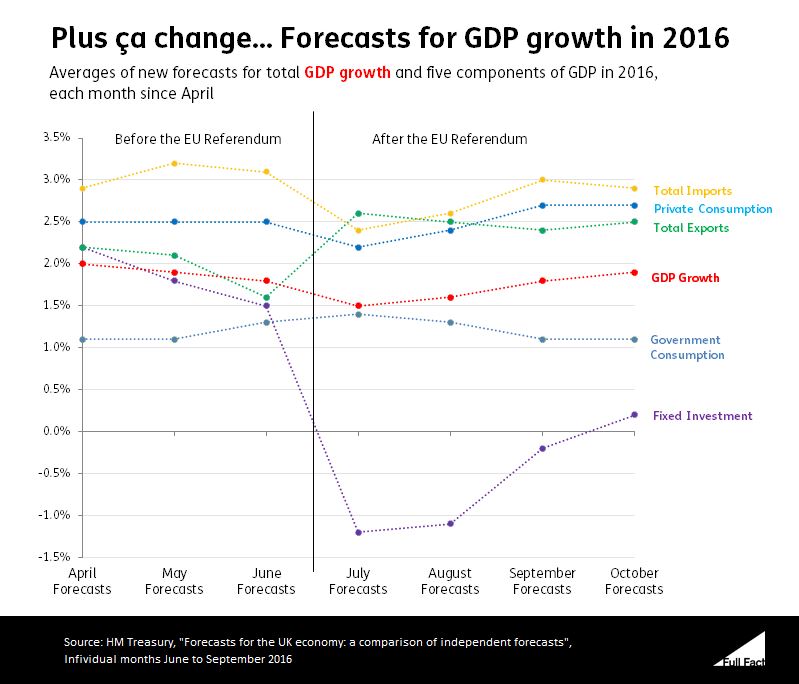 What’s more, economists are still saying that the outlook for 2017 doesn’t look as good as it did in June, on average.

On average, they suggest that UK economic growth in 2017 will be 1.2 percentage points lower than forecasts made before the referendum, growing 0.9% rather than the 2.1% predicted in June.

Most economists expect fixed investment to fall by 2.4% in 2017. That’s 6.7 percentage points lower than it was forecast to be in June,

Average forecasts for exports, imports and private spending in the UK are also significantly lower than they were in June. 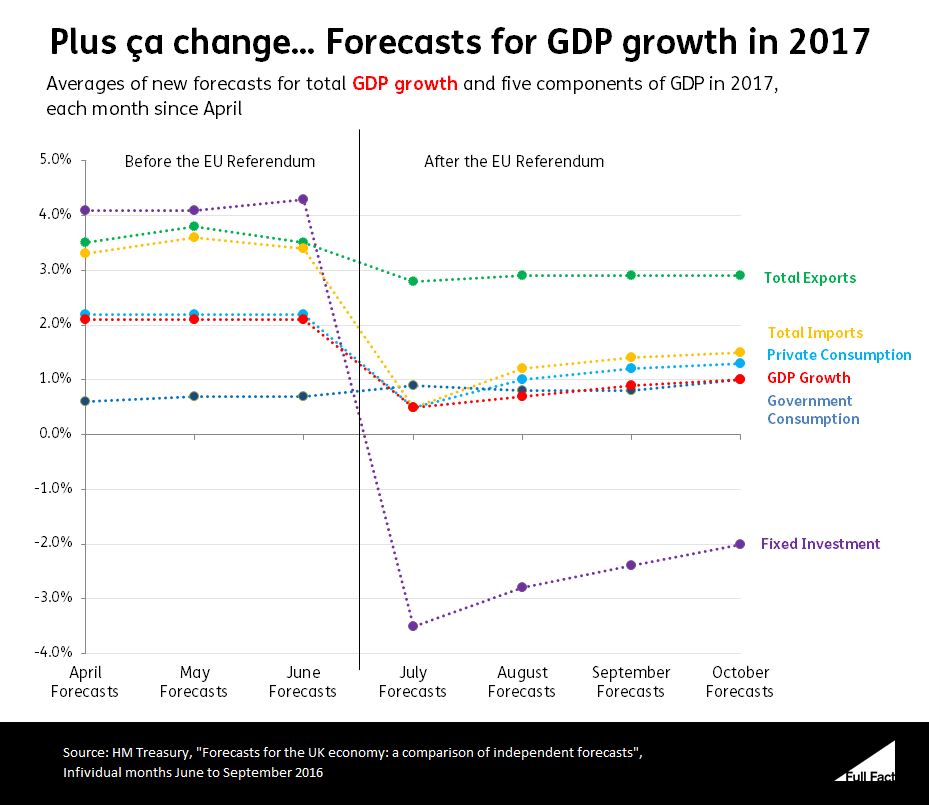 National GDP isn’t the only measure of how healthy the economy is, so you might want to consider what economic forecasters think will happen to other indicators.

The average forecast for growth in household incomes this year has risen slightly since June. It increased by 0.1 percentage points to suggest that incomes will rise by 2.3% in 2016.

But the average forecast for income growth in 2017 has fallen. Forecasts published in September said that household disposable incomes would only rise by 0.5%, compared to 2% back in June, before the referendum.

You might also want to look beyond average changes in the economy overall.

For example, the Treasury’s compilation list doesn’t tell us how economic forecasters think leaving the EU would affect different regions, genders or minority groups. It may affect people in different ways.

We updated the graphs in this article on 21 October 2016, to include new forecasts made in October and to correct an error in the original graph for growth forecasts in 2016.