Following the economic crash private sector wages were hit more quickly, harder and for longer than the public sector.

“As a result of the economic crash it was the private sector that got hit far more quickly and far harder and for far longer than the public sector.”

During a conversation about wages on BBC Question Time on 14 September, Ms Hartley-Brewer made this comparison on the effect of the financial crash on the public and private sector.

Between 2008 and 2010 the private sector saw a real terms cut in wages, according to the Institute for Fiscal Studies (IFS). The IFS describes wages as “largely frozen” during this time as it was only increasing by around 1% in cash terms—inflation at the same time peaked at around 5%.

In contrast, public sector wages continued to grow at about the same rate as they had before the financial crisis and were much closer to the level of inflation. The IFS puts this in part down to the fact that many public sector wages are agreed in three year settlements. Many of these settlements lasted from 2008 to 2011, though that wasn’t the case for all public sector workers. 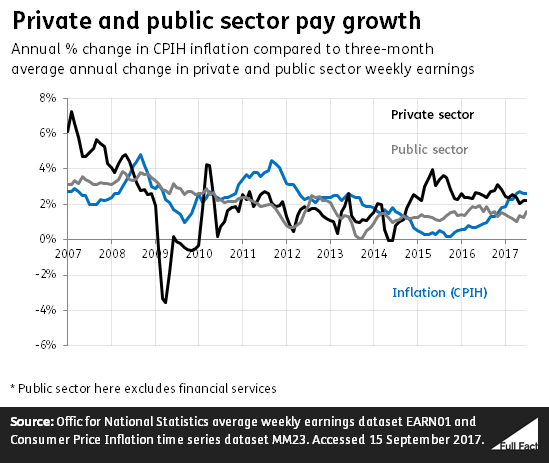 Looking just at averages isn’t always helpful. It doesn’t tell us much about the experience of individual people and the differences between their jobs in the public and private sector.

The IFS have looked at the changing gap between public and private sector wages, adjusting for the different types of workers in each sector. It found that after the recession public sector pay increased, compared to the private sector which fell sharply. But the IFS says that “the public sector pay restraint imposed since 2011 has returned the difference between public and private pay to around its pre-crisis level”.