What's the Coalition's record on tackling tax evasion and avoidance?

"... this Government is failing to tackle tax avoidance and evasion. The amount of uncollected tax rose last year and the Chancellor's Swiss tax deal has raised less than a quarter of the revenues promised"

Following the Chancellor's announcement this week of new plans to tackle tax evasion, Labour hit back by pointing to the government's record so far, saying it "simply isn't good enough".

Measuring the amount of tax which goes uncollected is notoriously difficult, and Labour's claim is right only due to a slight increase in the estimated 'tax gap' of £1 billion. Given the uncertainty behind the figures, this might not even be a genuine rise.

Labour is right to point out the government's 'Swiss tax deal' has raised little of what it initially forecast, but the party's figures are incomplete: it's more like a third than a quarter.

£1 billion more in tax is going uncollected since the election

We don't actually have that much information on the government's current record: HM Revenue and Customs (HMRC) still hasn't estimated how much potential tax was lost in the 2012-13 or 2013-14 financial years. The data we do have suggests there's been a slight rise in the amount which goes uncollected.

HMRC estimates it lost £35 billion in potential tax revenues in 2011-12, slightly more than it estimated went uncollected in its first year in office (£34 billion in 2010-11).

There's a great deal of uncertainty behind these estimates: HMRC has to make lots of assumptions about the tax it's owed, such as working out how many traders are taking cash-in-hand payments and not declaring their full income, as well as dealing with inevitable errors people make on their tax returns.

HMRC doesn't publish all the details on how uncertain these estimates are, but it does suggest that VAT losses alone (worth £11 billion of the £35 billion total) could range between £450 million higher or lower than the published figure.

So a difference of £1 billion across all the estimates isn't necessarily all that meaningful.

Over the long-term, less tax is going uncollected

The Treasury gets more in tax receipts each year, so we might expect the amount of uncollected tax to be growing. In fact, the £35 billion is roughly the same 'tax gap' - in cash terms - as there's been in every year since 2005.

HMRC estimates that the proportion of the tax it's owed which goes uncollected is falling. 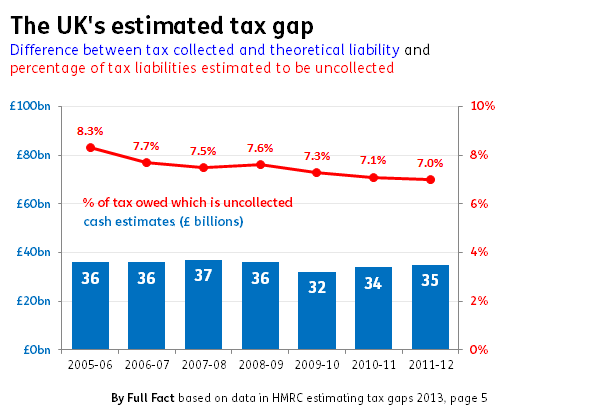 In 2011 the UK and Swiss governments negotiated an agreement on tax enforcement, which meant that previously unpaid tax held in Switzerland by people living in the UK would be taxed retrospectively. It came into effect at the start of 2013.

The government hailed this as the "largest tax evasion settlement in UK history" in its 2012 Autumn Statement, and estimated the policy would recoup "over £5 billion over the next six years".

But this turned out to be wrong. The Office for Budget Responsibility said in December last year that the total amount of money gained as a result of the agreement would only be £1.9 billion over the same period.

So far - up to the end of the 2013-14 financial year - about a third of the initial estimate is expected to have been recouped. 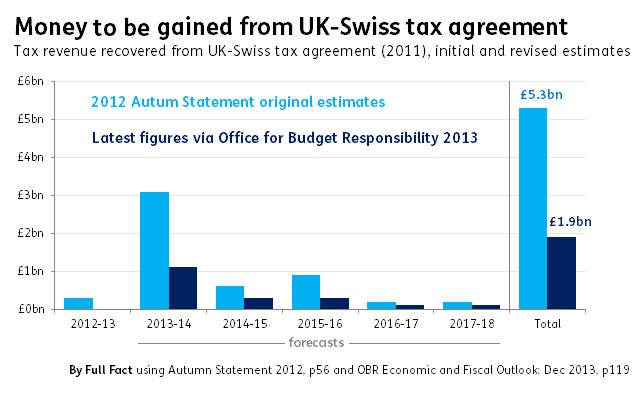 Labour's claim that less than a quarter of the expected money has been redeemed is based on separate estimates suggesting that about £800 million has been made so far.

These are correct but can't be compared with the government's original forecasts: they don't include money collected by HMRC or a separate disclosure facility in Liechtenstein, which were factored in to the original Treasury forecasts. They've been worth another £200 million.

The OBR suggested that the initial figures had overestimated the value of assets that British people held in Switzerland, overestimated the level of illegal behaviour that was taking place, and that people may have tried to get around the rules before they came into effect.

So looked at as a whole, less money has been made than expected, but it's not the scale of gap that Labour makes out.