"I'm happy to be judged on the record of what we have done. 250,000 fewer children in failing schools...on the specific issue of this story we are actually spending five billion pounds on new school places. That's twice what Labour spent in the previous four years and also these new free schools."

"The truth, though, is that seven out of every ten places in a free school are being created in areas of great need."

Amid claims of a row between senior Liberal Democrats, Treasury officials and Michael Gove over the weekend over whether funding for free schools has been taken from the budget for school places, David Cameron defended the Coalition's record on education on the BBC's Andrew Marr Show.

The Times also defended the free schools programme in this morning's leader - claiming that contrary to criticism, free schools are performing better than has been alleged.

The claims are accurate and are reflected in an analysis by the National Audit Office and by the Department for Education. But, when it comes to school places, simply comparing spending to the previous government does not take account of changes in the school age population over the last twenty years - which have affected demand.  The comparison also focuses on spending under one funding stream for school places and fails to consider the impact of other streams which may have provided for further school places.

When the Prime Minister says his government is spending over £5 billion on new school places, he's talking about the four year period from 2011/12 to 2014/15. The Department for Education also confirmed to us that he's referring to what's known as 'basic need' spending (from which Michael Gove is accused of re-directing money). This provides funding to local authorities to provide additional school places where needed in their area and includes the additional 'Targeted Basic Need Programme' which provides extra funding for local authorities in the areas most in need of additional places.

The equivalent spending on 'basic need' by the Labour government was £1.9 billion in the four year period 2007/08 to 2010/11, according to the National Audit Office.

But Labour also spent a lot more money on the Building Schools for the Future programme, a large school building programme scrapped by the Coalition government in 2010, which hasn't been included in the comparison. The NAO said there has been no complete evaluation of what impact the reduction in this spending had on the provision of new places. 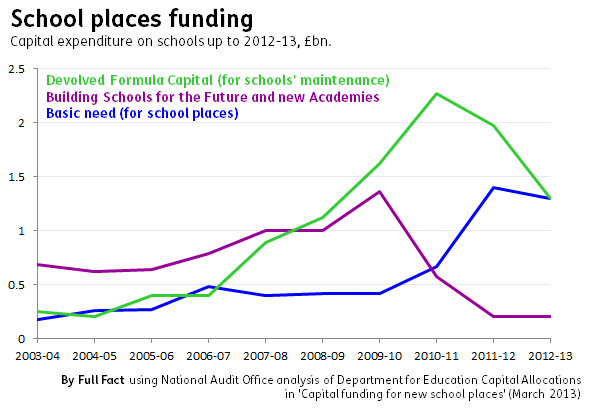 The data only takes us as far back as 2003/04, so it's tricky to assess Labour's overall legacy on the funding of new school places.

But, as we explained when we last looked at this claim, a key factor in the increased need for school places was a substantial increase in the birth rate between 2001 and 2011.

In the 1990s the birth rate declined leading the Department and local authorities to seek to remove excess capacity. This could be a factor in the lower spending on school places by the Labour government.

Forecasting such a need can be difficult to predict - and the NAO have questioned the accuracy of the longer-term forecasts in particular. The Department for Education have estimated that 240,000 new primary school places and 16,000 secondary school places will be needed by September 2014 - with demand expected to continue rising.

The Department says that free schools are "set up in response to what people say they want and need in their community to improve education" - so they're not designed solely to provide extra school places in areas that have a shortage of places.

The claim in The Times article comes from another National Audit Office report, which found that 70% of the estimated 114,000 primary and secondary places from open or approved free schools are in districts forecasting some need (defined as high, severe, or moderate need).

But there's a substantial difference between primary and secondary free schools, with 87% of projected primary places in areas forecasting high or severe need, but only 19% of secondary school places in such areas.

A more critical report published by the Public Accounts Committee last week said that more needs to be done to encourage applications from areas in need of places - claiming that half of areas with a high or severe forecast need for extra school places had not submitted any applications to open primary free schools.

Earlier this month we found there are more than 1.5 million children in schools assessed as 'requiring improvement' or 'inadequate' by Ofsted - a number which we found to have been decreasing over the last five years.

David Cameron's claim uses GCSE performance in secondary schools as its benchmark. The Department for Education's analysis, based on performance tables, finds the number of schools 'below the floor' to have decreased from 407 schools in 2010 to 154 schools in 2013 - accounting for a decrease in pupils from 362,000 to 117,000. 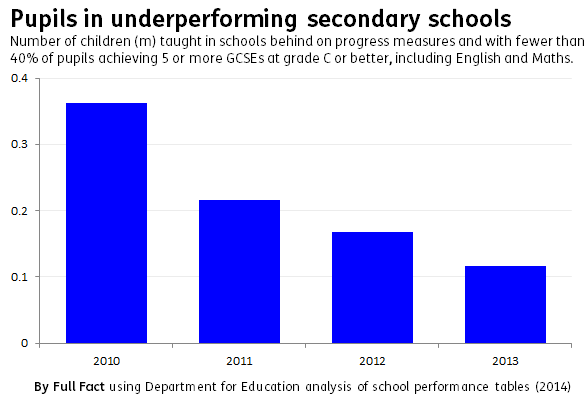 Schools are classed as 'below the floor' if less than 40% of their pupils achieve 5 or more GCSEs at grade C or above, including English and maths.

Update 13/06/2014: This article has been updated in response to reader feedback that the conclusion wasn't clear.

Update 24/02/2015: The article originally said the basic need spending comparison was between five year spending periods, but it was four year periods.