EU Referendum Voting Guide: Stronger In on the economy

Experts agree that… [if we left Europe] there would be less money for public services like the NHS.

Most economists seem to agree that leaving the EU would cost the UK economically. If that happened, the government would need to raise taxes, cut other things, or borrow to keep NHS spending at the same level.

The study behind this claim estimated that being in the EU benefits the UK between £73-91 billion a year. These are very precise figures for a very uncertain impact.

For every £1 we put into the EU, we get back almost £10 in lower prices, more jobs and more investment. 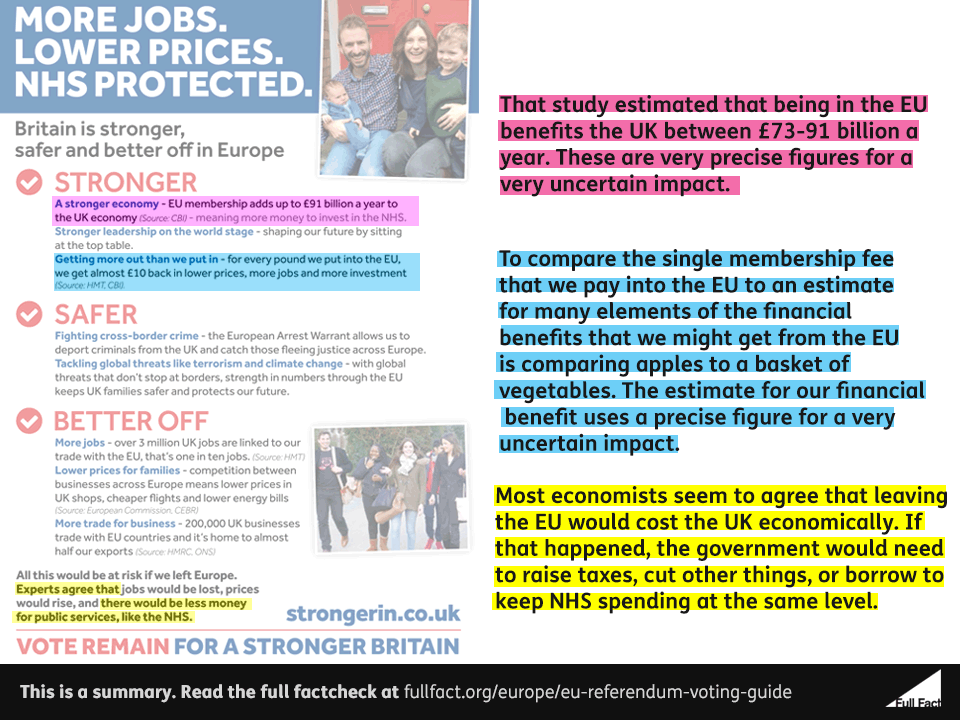 The £1 to £10 ratio comes from comparing our net contribution to the EU budget to an estimate by the Confederation for British Industry (CBI) of the financial impact of being in the EU. This is like comparing apples to a basket of vegetables.

The UK’s EU membership fee, minus what the EU spends in the UK, has averaged around £9 billion over the last few years. Meanwhile the CBI estimates being in the EU leads to a financial gain of £73-£91 billion a year. This is also where the £91 billion claim comes from. It’s equivalent to about 4-5% of the size of the UK’s economy.

While our membership fee is an exact figure, the financial benefit of being in the EU is highly uncertain.

The CBI’s estimate is based on a selection of studies produced at different times (some date back well over a decade), with different methodologies, and designed to answer different questions. Some looked at the economic impact of EU membership to date, and some at the future impact of a vote to leave. Some are not even specific to the UK.

While some of these studies have attempted to account for what the financial costs and benefits might have been had the UK not joined the EU, it’s very difficult to do this, and impossible to put a precise figure on it.

As for how the NHS would be affected if we leave, most economists seem to agree that leaving the EU would cost the UK economically, which could mean less money available overall. All other things being equal if there is less money in the economy there will be less money for anything the government wants to spend money on.

Whether the NHS actually gains or loses when the economy grows or shrinks depends on the policy the government chooses to adopt. The Coalition government protected NHS spending at a time when most other areas saw spending reductions, although the NHS was and still is being asked to make efficiency savings.