Diabetes prescriptions are costing the NHS in England more than £1 billion a year, according to figures from NHS Digital.

We can’t know how much it actually costs the NHS. £1 billion was the net ingredient cost in 2017/18 of items for diabetes prescribed in England through NHS primary care settings. There is no available information on what discounts the NHS might receive or extra costs relating to dispensing.

“Diabetes prescriptions are costing the NHS in England more than £1 billion a year, according to figures from NHS Digital.”

This claim about the cost of diabetes prescriptions was reported in a number of news outlets last week.

It refers to the listed value of drugs that were prescribed by GPs and pharmacists through the NHS in England in 2017/18. But that doesn’t tell us how much the NHS actually paid for them, or how much they cost to prescribe. It also doesn’t include any costs for drugs administered in hospitals.

How much the NHS actually paid for the drugs will be affected by things like the discounts it may have received for bulk buying, income from prescription charges, and dispensing costs. There isn’t information available on how much this was worth, so we can’t know the actual sum the NHS paid.

Figures published by NHS Digital, the organisation that publishes lots of the data relating to health and social care in England, show that around 53 million items were prescribed for diabetes in 2017/18 with a net ingredient cost of just over £1 billion.

But this isn’t necessarily the amount the NHS in England paid for these prescriptions. The net ingredient cost is the amount the drugs are listed at—rather like the recommended retail price (RRP) you see in shops (although VAT isn’t included in the net ingredient cost as it would be for an item bought in a shop). But, as NHS Digital says, it “does not take into account any contract prices or discounts, dispensing costs, fees or prescription charges income, so the amount the NHS paid will be different.”

There isn’t information on exactly how much all of the items prescribed for diabetes last year cost the NHS in England overall.

These figures also only cover the drugs and other medical items prescribed and dispensed in “primary care” settings by GPs, nurses, and pharmacists working in the community, so they don’t count the cost of any drugs administered in a hospital setting.

Diabetes meters and sensors aren’t included in the cost of prescriptions as these aren’t dispensed in primary care. We’ve written more about some of these sensors here.

People with diabetes can qualify for free prescriptions.

Drugs prescribed for diabetes made up around 5% of all items prescribed through primary care in the NHS in England in 2017/18, and around 11% of the net ingredient costs of those items. 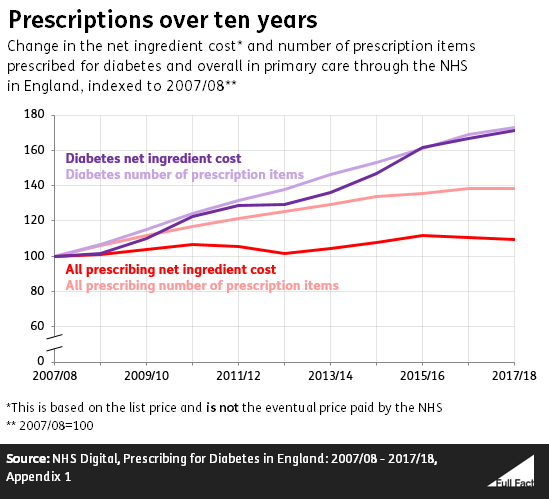 Of the £1 billion total net ingredient cost for diabetes drugs in 2017/18 the largest amount, just under £480 million, was spent on antidiabetic drugs (which help manage sugar levels in the blood stream and is usually prescribed for type 2 diabetes). This was followed by £350 million on insulins and £180 million on diagnostic and monitoring devices. 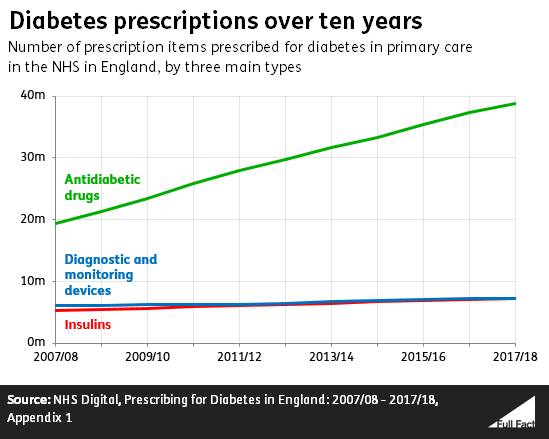 The number of patients aged 17 and above diagnosed with diabetes has increased by around 37% since 2009/10.

The data published by NHS Digital doesn’t break down the prescriptions for diabetes between the different types of diabetes.