Wealthy professionals are most likely to drink regularly.

Broadly correct. We don’t have the exact data to confirm this, but high earners and people in professional jobs are more likely to say that they drink weekly than other people.

It’s correct that people in Great Britain who earn more and those who have professional jobs say they drink more regularly, if you count that as drinking weekly.

An Office for National Statistics survey found 70% of people in a “managerial and professional occupation” and 79% of people earning more than £40,000 a year, drank in the week before being surveyed compared to 57% of all over 16s.

The ONS says it’s likely the survey underestimates the level of drinking.

Professionals and high earners have similar, but not identical, drinking habits

The claim talks about “wealthy professionals”, although the available ONS figures only cover peoples’ income and jobs separately, so we’ve looked at those with higher incomes (earning more than £40,000 pre-tax a year) and those in “managerial and professional occupations” separately.

Though there is a lot of overlap  between people surveyed who have high incomes and those in “managerial and professional occupations”, they are not identical groups and don’t have identical drinking habits.

Also the ONS defines people’s socioeconomic status according to the job type they hold or most recently held. This means that someone who is retired but previously had a professional job may fall into both the “managerial and professional occupations” category and the “economically inactive” category, so comparisons between the groups aren’t perfect.

Nevertheless, both higher earners and professionals are more likely to drink weekly than people with other working status or lower incomes. 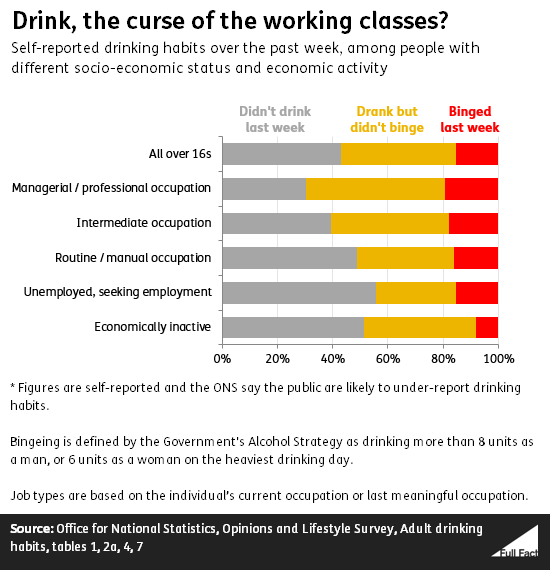 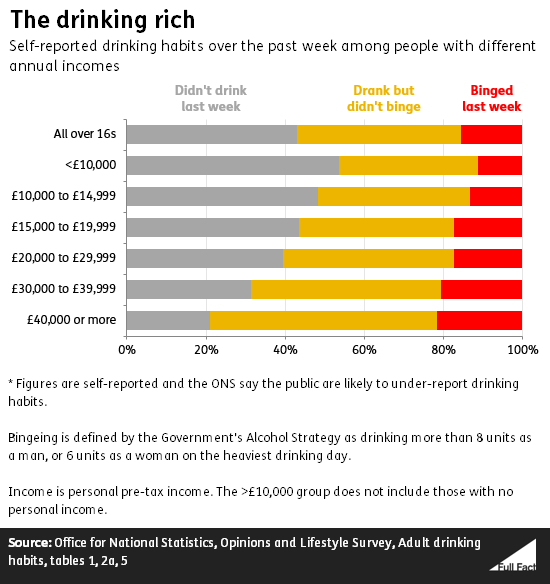 People on higher incomes are more likely to drink five times a week (14%) than those earning under £30,000. 10% of professionals drink at least five days a week, higher than the 7% of people with “routine and manual occupations”, but not higher than people with “intermediate” jobs, or not in employment.

Also, despite being more likely to drink weekly, professionals aren’t significantly more likely to binge drink than other socioeconomic groups, except “economically inactive” people – who are neither in work nor looking for work, such as retired people and students.

19% of professionals binged (defined as drinking more than 8 units as a man, or 6 units as a woman) on their heaviest drinking day over the previous week.

22% of higher earners binged in the week before survey, significantly higher than those earning under £15,000.

We’re all drinking less than we used to…

In particular the number of men under 25 bingeing has fallen significantly from 32% in 2007 to 20% a decade later.

Though we are probably lying about how much we drink

All these figures come from a survey and the ONS says: “It is likely that the estimates underestimate drinking levels to some extent.

“Social surveys consistently produce estimates of alcohol consumption that are lower than the levels indicated by alcohol sales data.

“This is likely to be because people either consciously or unconsciously underestimate their alcohol consumption."

We have changed our conclusion and graphs to make clear that the data is self-reported by survey respondents.