Were no psychiatric beds available anywhere in England at the weekend?

There were no psychiatric beds available overnight for NHS patients across England on Saturday 28 October 2017.

We don’t know how many beds were available as there are no published figures. NHS England says this is incorrect. Anecdotal evidence suggests there have been times when none of the correct type were available.

“Last night in England, there were no psychiatric beds available for NHS patients. Not one. Anywhere. This is England in 2017. A disgrace.”

“This is not true - could you contact @NHSEnglandMedia if there is an issue with any patient. We can connect with the regional team to help”

We don’t know how many mental health beds were available on Saturday night. Former England footballer, Stan Collymore, tweeted that there were none. NHS England has said this isn’t correct, but they didn’t reveal how many beds were free.

Overall, the number of mental health beds in England has been falling for many years.

NHS England publishes figures on the daily average number of mental health beds which are available and occupied every three months. Last Saturday is too recent and too specific for the published figures to be able to show us anything.

We asked NHS England how many beds were free on Saturday, but they declined to comment other than to say Mr Collymore’s assertion wasn’t true.

Anecdotal evidence suggests there are sometimes no available beds

There are different types of mental health beds which all deal with patients who have very different needs. Having no bed available for one patient doesn’t mean there are no beds available for any patients, it may just be the right type of bed is unavailable.

There have recently been a number of high profile cases reported in the media when the necessary kind of hospital bed could not be found for mental health patients in England. The NHS Confederation’s Mental Health Network - the representative body for NHS-funded mental health service providers - also heard anecdotal evidence from its members last year that “there are occasions when there are no routine acute mental health assessment beds available across the country.”

Some beds are specifically for children and young people, others for mothers and babies. Some are in rehabilitation units or on secure wards. The most well-known and used type of bed, according to the Mental Health Network, is the acute inpatient bed. This is for adult patients aged 18-65 who are “in periods of acute psychiatric illness”.

A report published last year by the independent Commission on Acute Adult Psychiatric Care (set up by the Royal College of Psychiatrists) highlighted problems with the availability of acute psychiatric beds. It said that declining bed numbers, increased numbers of patients on wards and problems discharging patients meant that the “situation has become more pressurised in recent years”.

There are also cases where patients have to be placed outside their local area.

There were at least 935 mental health placements of patients in a hospital outside of their local area in August 2017. Of these, 885 were considered to be “inappropriate” placements – meaning that a nearby bed wasn’t available. The actual figures will be higher because not all hospitals submitted their figures, and people who’ve been in hospital for nearly a year or more aren’t counted.

There were 18,450 NHS beds for mental health patients in England available overnight between April and June this year. Of these 89%, or around 16,440, were occupied. There’s been a slight increase in that proportion over the last seven years.

These are the most recent figures we have and classify the beds by the main speciality of the consultant in charge of them. If patients are occupying a hospital bed but their care isn’t being led by a consultant – but by a nurse or GP for example - then they won’t be counted.

The number of mental health beds has been decreasing 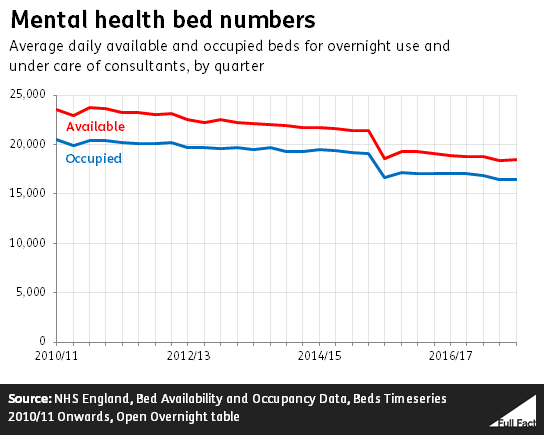 Mental health and learning disabilities have seen the largest percentage reductions in NHS beds of any sector since the 1980s, according to health think tank the King’s Fund. The King’s Fund says that this is the “result of long-term policies to move these patients out of hospital and provide care in the community”. The number of mental health beds fell by 72% between 1987/88 and 2016/17.

The Care Quality Commission says that there are “a low number of admission beds per head of population [in England] compared with some other developed countries”. It attributes this to “universal coverage with community mental health teams, and well developed and specialised mental health services for older people that are successful at diverting many people from admission”. The CQC also highlighted the “national concern” there was about the availability of mental health beds, particularly for young people.