Question Time this week came from London, specifically Dulwich in the south of the city, and by far the most claim-heavy part of the show was a lengthy discussion on knife crime.

The full list of topics covered this week were whether stop and search could be used to tackle knife crime, whether the Prime Minister could unite the country and parliament around a Brexit deal, and if burning a model of Grenfell Tower—as happened on bonfire night last week—should be considered a crime.

Obscure fact about Dulwich tangentially related to politics: the UK’s first female Prime Minister, Margaret Thatcher bought a house in Dulwich in 1985. She briefly retired there after leaving office in 1990.

Kicking off the programme the audience wanted to know “Should stronger use of stop and search powers be employed to tackle our current knife crime epidemic?”

David Dimbleby made the first claim of the show saying “[The police] have been cut back over the last ten years.”

That’s correct. In that time the number of police officers in England and Wales has fallen by 19,000 and now stands at 122,000. We’ve written more about this here. 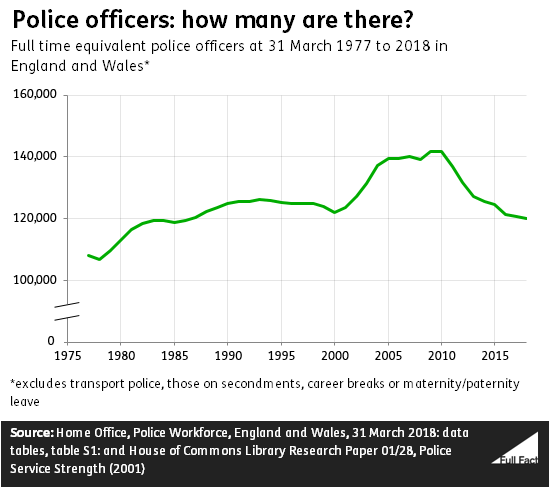 Responding to this Kwasi Kwarteng discussed the economic climate. He began by saying “when we came in 2010 we had the biggest peacetime deficit in this country’s history.”

The deficit is how much more the government spends each year than the amount it receives (for example from taxes). There are a few ways to measure this, but using the widest possible definition of the deficit in 2009/10 the deficit was £175 billion (in 2017/18 prices) or 10% of GDP. That’s higher than any other time since 1920, with the exception of the Second World War. 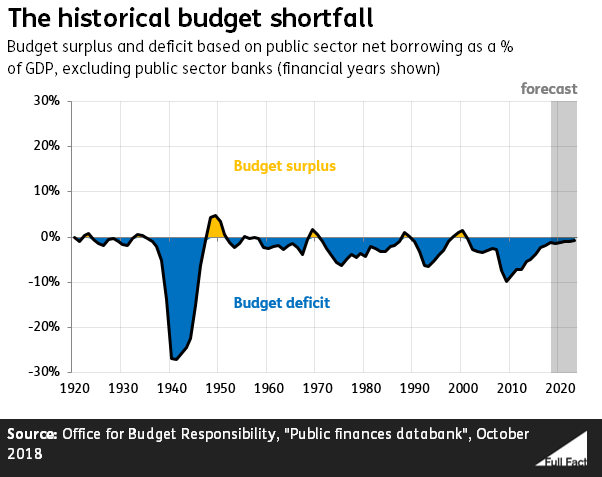 He then said “We made a 20 billion pledge to the NHS.”

It’s correct the government has announced that the NHS in England will receive a £20.5 billion funding increase in real terms by 2023/24. In addition to this an extra £1.25 billion a year will be set aside for “a specific pensions pressure” in the NHS. We’ve written more on this here.

The Nuffield Trust has said that other areas of health spending which haven't yet received similar funding announcements will see their budgets fall by £1 billion next year.

We’ve asked Ms Abbott’s office for more information on the research she is referring to.

Last year the College of Policing analysed the relationship between stop and search rates and crime rates in London from 2004 to 2014 and found “higher rates of stop and search were occasionally followed by very slightly lower rates of crime”. The effect on violent crime rates was either not found or “negligible”, depending on which legal basis the search was carried out.

However the authors added: “Given that ‘reasonable suspicion’ searches are supposed to be investigative in nature, it seems that overall crime reduction should be seen more as a useful by-product of stop and search rather than a main objective.”

Another study by the Home Office in 2016 looked specifically at the Metropolitan Police’s initiative to reduce knife crime in 2008, under which the the number of stop and searches in the capital dramatically increased.

Its analysis said the large surge in stop and search had “no discernible crime-reducing effects,” though it added the analysis couldn’t be used to understand the effectiveness of stop and search generally.

She then said: “So many youth clubs have been closed down under austerity,” citing it as a factor behind rising knife crime.

We haven’t seen complete data on how many youth clubs have closed down in recent years. The union Unison has made estimates by sending Freedom of Information (FOI) requests to all local authorities in Great Britain in 2016. Unison said that 180 of 210 relevant local authorities responded, and among these over 600 youth centres were closed between 2012 and 2016. This doesn’t tell us if any other centres opened up in that period.

Green Party London Assembly member Sian Berry submitted FOI requests to London councils on the number of youth club closures earlier this year. She reports that 25 of 32 councils (Hammersmith & Fulham and Kensington & Chelsea are combined in the data) provided sufficient data (which the London Assembly Green Party group’s office shared with us) to make a comparison over time. In these 25 council areas, the number of youth centres fell from 243 in 2011/12, to 162 in 2017/18—a net fall of 81 (33%). The data can be explored in an interactive map here.

David Dimbleby then said “Two thirds of knife offenders under 25 were black or minority ethnic.”

In 2017 two thirds of knife crime offenders under 25 in London were black or minority ethnic, according to the Mayor of London’s Office for Policing and Crime. We’ve asked the Ministry of Justice for data covering all of England and Wales.

In the year to June 2018 36% of serious knife offences were committed in London. We’ve written more about knife crime here.

Broadening the conversation to other areas of the country, Diane Abbott said “People forget that before Glasgow took the action it did, Glasgow was the knife crime capital of this country.”

The more commonly cited version we’ve seen of this claim is that Glasgow used to be called the “murder capital” of Europe rather than “knife crime capital” of the country (an internet search for the former returns far more hits). This title has a slightly ambiguous origin—some sources link it back to a 2005 World Health Organisation (WHO) report, which we have not seen.

Regardless of its original source, the “murder capital” moniker was one of the prompts for Strathclyde Police Force to set up a “Violence Reduction Unit” in January 2005. This aimed to tackle violent crime in Glasgow, with a particular focus on knife crime and weapon carrying. The Unit adopts a “public health approach” (influenced by a 2002 WHO report), which “includes prevention activity such as education and early intervention coupled with appropriate law enforcement as necessary. 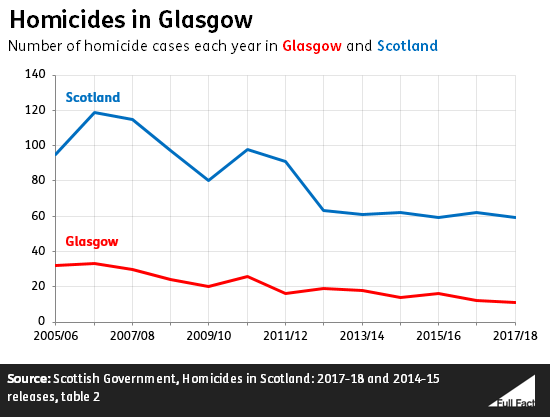 Kwasi Kwarteng said: “I read there were about 119 people that were killed in London.”

The Metropolitan Police confirmed to us that as of 9 November 2018 it has recorded 119 homicides in the capital so far this year. Of these, it said 73 had been stabbings and 13 were shootings. The rest were the result of other serious attacks like strangulation, arson, or assaults.

Turning away from the subject of crime the audience then moved on to Brexit, a topic Kwasi Kwarteng claimed people are “bored to their back teeth” of.

Bored of Brexit? According to one poll earlier this year, most people are, and this unites both Remain and Leave supporters https://t.co/SOZGi0TMC2 #bbcqt

The specific question put to the panel was: “Is there any deal Mrs May can bring back from Brussels which will both unite the country and gain parliamentary approval?”

Kicking off the discussions a number of panellists gave their view on how many possible Brexit deals and approaches to the Irish border question there could be.

On the topic of the Irish border Kwasi Kwarteng said “There is a border now. There are different VAT rates, different corporation tax rates.”

Looking specifically at his claims about tax, the standard VAT rate in Ireland is 23% and reduced rates vary from 13.5% and 4.8%. Standard VAT in the UK, including Northern Ireland, is 20% and the reduced rate is 5%. Zero rate VAT is applied to certain things in both Ireland and the UK, for example certain foods.

There were plans to devolve corporation tax to the Northern Ireland Assembly, but these have been postponed. The main rate of corporation tax in the UK, including Northern Ireland, is 19%, and due to fall to 17% in 2020. It’s currently slightly higher at 20% for certain investment funds. Companies that make over £300,000 of profit from UK oil and gas extraction or rights are subject to a 30% tax rate.

The rest of the discussion was dominated by the panel and the audience giving their views on the various Brexit deals that have been proposed and how likely an agreement was going to be.

The final question of the night related to reports this week that a group of people put a model of Grenfell Tower on a bonfire, and the incident was filmed and then put online. Six men were arrested on suspicion of a public order offence and then released while investigations continue.

Given these circumstances the audience said that the video was offensive, but they wanted to know “is it a crime?”

The panel seemed to largely agree that while the content of the video was offensive it should not be a crime, unless police have unearthed new information.

There was then a lengthy discussion on free speech, abusive speech, hate and courtesy without many concrete claims for us to check.

We have factchecked the claim that stop and search doesn't work.