Question Time this week came from the Welsh harbour town of Milford Haven, and was entirely dominated by the political fallout from the draft withdrawal agreement between the UK and the EU—an example of the rarely-seen single topic Question Time.

The topics covered this week included: Brexit. That’s it.

Obscure fact about Milford Haven that’s not, if we’re honest, particularly related to politics: the first inhabitants of the town of Milford Haven weren’t Welsh, they were American. When the new town was established in the 1790s to take advantage of the large natural harbour, the first settlers—encouraged to migrate by the town’s founder Sir Charles Francis Greville —were six families of Quaker whalers from Nantucket.

The first question was the one that had been on many people’s minds this week: “How long can Theresa May last?”

There weren’t really any checkable claims made in this section the show; it was mostly just people giving their opinion on Brexit and Theresa May’s handling of it. The most, er, interesting exchange came when Claire Perry went off topic and then accused David Dimbleby of sexism for trying to interrupt, which in the absence of much else to write about we record here in full:

Claire Perry: ...And I take to Mark’s point about a general election, if I just may finish…

Claire Perry: I don’t know… I know you hate it when women talk…

Claire Perry: I love you really.

David Dimbleby: I don't want you to love me, I want you to accept that there are five people on the panel and maybe the conversation should be in fifths.

The second question was “Is no deal better than this deal?”

This section actually gave rise to some factual claims of the kind we can check, which was nice. Barry Gardiner kicked off by talking about how bad no deal could be, mentioning the prospect of “70% tariffs on Welsh lamb”. That figure is too high. Tariffs on frozen boneless mutton are 72%—but mutton, as a famous phrase notes, isn’t really lamb. The Agriculture and Horticulture Development Board (AHDB) estimates that tariffs on lamb range from 32% to 61%. Tariffs vary for different sheep products and are a combination of a fixed price per tonne and a percentage share of the meat value.

That’s not to say that tariffs on lamb are unimportant. Most sheep meat imports into the EU fall within a tariff-free quota (e.g. New Zealand can export over 220,000 tonnes to the EU tariff free each year, above which the tariffs are applied). The AHDB says the tariffs are high enough that this “makes any sheep meat outside of the quota uncompetitive on the EU market, so virtually all sheep meat is imported through the quota.”

Liz Saville Roberts said “We are looking at a situation where this deal that the government has on offer would wipe 5 billion off the Welsh economy, wipe 200,000 jobs dependent on the single market and the Customs Union in Wales.”

In 2014 the Centre for Economics and Business Research did some research into how many jobs in the UK were associated with, but not necessarily dependent on, exports to the EU. It found that around 4.2 million jobs were associated across the UK and that around 190,000 of these were in Wales.

The following year CEBR revised this analysis, finding that 3.1 million jobs were “attributed to our trading links with Europe”, but it didn’t look at how these jobs were distributed across the UK. We’ve more on this here.

We’re looking into her claim about £5 billion being wiped from the Welsh economy.

Ms Saville Roberts also said: “There has been a SkyData poll today that says that 55% of people in the United Kingdom would support a People’s Vote.”

That’s almost correct—the poll was of adults in Great Britain (so without Northern Ireland), not the whole United Kingdom. The poll was only of Sky customers and so might not be representative of the general population.

There have been other polls on the support for a “People’s vote.” A Yougov poll this week found 48% of GB adults in favour of a second referendum—excluding those who said “don’t know” that figure increased to 59%.

You can read more from us about support for a second referendum here, though public opinion may have shifted following the deal’s publication and recent political events.

Mark Serwotka said that “Currently at our ports and our airports and our borders, we only check 10% of all freight coming in.”

It told us he was trying to “highlight the situation regarding the possibility of no deal, the lack of preparation that has gone into such a scenario”

It also added that the 1% figure came from the Port of Dover authorities, which we’ve previously checked. The Port authorities have been cited a number of times saying that around 1% of vehicles are checked, though we’ve not seen the data behind this.

Research from the Institute for Government think tank found that around 3% of all imports have documentary checks carried out on them—and these are only done on non-EU imports.

He then said “If we leave with a no deal, the M20 and the motorway system will be a lorry car park for weeks on end.”

This is a reference to Operation Stack, a procedure where lorries are allowed to park on sections of the M20 when there are disruptions to travel to Europe out of the Kent ports or Eurotunnel.

Ms Perry said of the draft withdrawal agreement: “It absolutely does not create any form of separation for Northern Ireland.”

This isn’t strictly correct. The withdrawal agreement lays out different ways the UK’s relationship with the EU can proceed post-Brexit.

If the EU and UK don’t agree to any of those future relationship options, the so-called backstop kicks in, under which Northern Ireland is treated differently to the rest of the UK.

So in theory, under the agreement, the UK could be forced into that situation if the EU weren’t minded to accept any of the other future trade options outlined in the agreement. We’ve written more about this issue here.

Liz Saville Roberts said “We’ve already heard someone mention, the gentleman at the back mentioned that Wales is having 27 powers taken back from it.”

This relates to powers that are currently devolved to national governments in Wales, Scotland and Northern Ireland. It concerns those which are currently supported by EU law, but which may be written into UK-wide law after Brexit with restrictions on how the devolved governments can use them.

This is a complex topic (too long for a humble Question Time recap) that we’re planning to write more about in the future.

Claire Perry pointed out that “Every business organisation came out yesterday and said thank goodness we have got a deal that works, the pound went up, people said great, this is a deal that works. It has gone down today…”

It’s been a volatile week for the pound. But in the grand scheme of things, the changes that have been happening are small.

The pound would have bought you €1.14 at the start of Monday this week, and over €1.15 late on Tuesday amid expectations of a draft deal being agreed. But following the Cabinet resignations yesterday, the level fell back to less than €1.13. That’s still well below the value of €1.30 just before the EU referendum, and even further below the heights of €1.40 in parts of 2015. It’s also above the troughs seen after the referendum of just over €1.10, and its lowest point in August 2017 of €1.08. 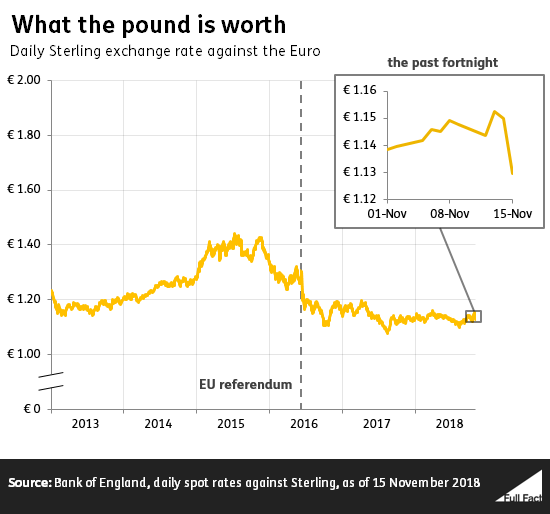 The Confederation of British Industry (CBI), which represents businesses across the UK, welcomed news of the agreement by the Cabinet (at the time), saying it took the country a step away from a “no deal” scenario, although noting that “uncertainty remains high”. The Federation of Small Businesses (FSB) echoed this and praised the greater certainty offered for businesses.

In a break with Question Time tradition, David Dimbleby took the third and fourth questions together, as they both addressed possible routes forward from the hypothetical parliamentary impasse on the withdrawal agreement. They were, in order, “Is a people's vote the only democratic answer to a parliamentary shambles?”, and “Are we heading for another general election?”

Mark Serwotka then talked of a “100,000 shortage of staff in the NHS”, as part of a brief discussion of non-Brexit issues the country faces.

That’s looking at whole-time equivalent figures, or the number of jobs there would be if all the vacant hours were added up to create only full-time roles. The figures are also based on management information, rather than official statistics, so it’s hard to know exactly how reliable they are. We’ve written more about this here.

And finally Claire Perry, talking up the government’s record, said “Let’s talk about £20 billion extra for the NHS every year.”

Earlier this year the government announced that it would be increasing spending on the NHS in England by £20.5 billion over the next five years. That’s accounting for inflation, or the increase in prices over that time.

The Nuffield Trust has said that other areas of health spending which haven't yet received similar funding announcements will see their budgets fall by £1 billion next year.

We updated this article with more on freight checks at Dover and the Channel Tunnel after receiving information from the PCS.