21% of UK electricity comes from nuclear

“Westinghouse Springfield site in my constituency employs over 1,200 people in high-skilled jobs manufacturing nuclear fuel, that generates 15% of the UK’s electricity…”

Mr Menzies’ office told us that these figures came from Westinghouse Springfield itself. The power company says that their nuclear fuel is used to generate around 15% of the UK’s electricity.

In 2015, the nuclear industry supplied about 21% of the UK’s energy overall. 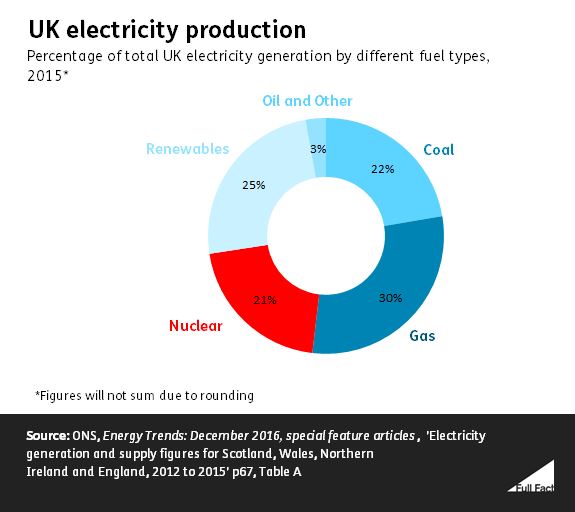 “... does my right honourable friend agree with me that the nuclear industry is of crucial importance to the north-west economy, and will she continue to support the construction of a new nuclear power station, to guarantee jobs in the region?”

The figures include people employed anywhere in the supply chain - not just at nuclear power plants.

“The fact [is] that we are seeing more people being treated in our NHS. Two and half thousand more people are treated within four hours every day in the National Health Service.”

The number of A&E visits that took more than four hours to process did hit 1.8 million in 2015/16, according to data from NHS Digital. The previous year it was 1.4 million.

The Prime Minister replied that 2,500 more daily visits are being processed within four hours. That’s also true: over 900,000 more annually since 2009, if you look at all types of A&E departments. Both the ‘good’ and the ‘bad’ figures can be on the rise simultaneously, as many more people are visiting A&E overall. 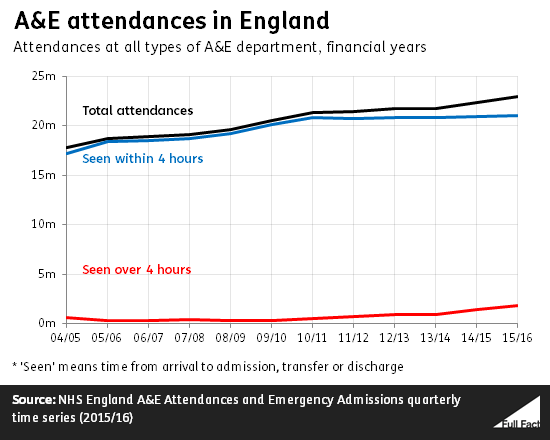 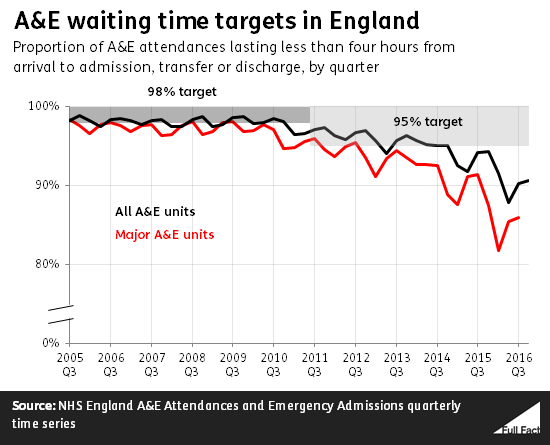 These annual figures doesn’t tell us about A&E performance this winter. The very latest data available, for October 2016, shows that the figure for those treated in under four hours in ‘major’ departments—big 24-hour A&Es staffed by consultants—was down to 84%.

A footnote: in all cases, these figures are for the number of attendances at A&E rather than the number of individual patients. They also cover England only.

Between 2010 and 2015 the number of mental health nurses in England was reduced by over 6,100, or 14%. These are ‘full-time equivalent’ nurses working in psychiatry and with people with learning disabilities. More recent figures to September 2016 show the fall at around 6,500.

Looking only at mental health nurses working in psychiatry (and excluding those working in learning disabilities) there were around 4,600 fewer between 2010 and 2015. That’s a reduction of about 11%. Adding in the more recent figures to September 2016, that fall is around 4,800.

The number of places for trainee mental health nurses has increased in recent years. But this won’t necessarily lead to more nurses actually working for the NHS—Health Education England is concerned that “the existence of over 3,000 vacancies indicates this education supply is not translating into increased numbers in employment”.

We’ve asked Mr Corbyn’s office about the source of his claim that there are 400 fewer doctors working in mental health.

There were 167 fewer fully trained doctors specialising in psychiatry and psychotherapy in September 2016 compared to September 2010, and 36 fewer such doctors overall, according to the latest NHS England workforce statistics.

Has the number of people using mental health services increased?

“If we look at what is happening in relation to mental health treatment in the National Health Service, we see 1,400 more people every day accessing mental health services.”

The Department of Health told us that the Prime Minister was referring to the difference between the number of patients using NHS adult mental health, learning disability and autism services in 2010/11 and 2014/15 in England.

However, changes to the way information about mental health service users are collected means that the figures for these two years aren’t directly comparable.

NHS Digital, which publishes the data, told us that they can’t be used to find an exact trend for those years either. That means we can’t say for sure how the numbers of people being treated has changed.

The figures from before 2010/11 do show us that the number of people accessing mental health services was increasing up until that point.

NHS Digital told us that this, combined with the fact that uses of the Mental Health Act increased between 2011 and 2015, probably means that the number of people accessing mental health services has increased in the last few years. We just can’t say by exactly how much.

These figures aren’t directly comparable with any from previous years because NHS Digital changed the way they were collected in 2016/17, including the addition of data for children and young people and counting a small number of people who changed mental health provider.

NHS Digital says its best estimate is that there has been a 10% increase in the number of people in contact with adult mental health, learning disabilities and autism services between 2015/16 and 2016/17. But it also says that this estimate is “possibly unreliable.”

There were around 1.8 million people in contact with NHS adult mental health services in 2014/15 and 2015/16 (these two years are directly comparable).

NHS Digital also told us that these figures don’t include people who just go to their GP about mental health issues or the Adult Improving Access to Psychological Therapies programme which provides therapies for people with anxiety and depression.

Elections on the horizon in Northern Ireland

“The legislation is that if within seven days we don’t have a nomination for a Deputy First Minister [in Northern Ireland], then the matter would go to an election”

The deputy First Minister of Northern Ireland, Martin McGuinness, resigned on Monday 9 January. If the Sinn Féin party don’t nominate a replacement, that does mean an election.

Under the Northern Ireland Act 1998, “where the offices of the First Minister and the deputy First Minister become vacant at any time, they shall be filled... within a period of seven days”.

The resignation of the deputy First Minister, who despite the title is meant to be the equal of the First Minister, also ousts the First Minister, Arlene Foster, from office. Northern Ireland has a power-sharing government, which has to represent both unionists and nationalists in the province; Ms Foster leads the Democratic Unionist Party.

So both the First Minister and the deputy First Minister now have to be re-nominated. If the posts aren’t filled within a week, the Northern Ireland Secretary, James Brokenshire, has to “propose a date for the poll for the election of the next Assembly”.

Sinn Féin is the only party that can nominate a replacement for the outgoing deputy First Minister because it’s the largest party representing nationalists. But it has said that it won’t because of a disagreement with Ms Foster.

The law requires Mr Brokenshire to arrange an election unless things are patched up by 5pm on 16 January. He has said that “although there is no fixed timetable in the legislation for me to do that, it needs to be within a reasonable period”.