In 2017, Full Fact came back from holiday after the busiest 12 months in our seven year history. We’d factchecked the EU Referendum campaign, grown to a permanent staff of eleven, and reached a larger audience with our factchecks than ever before.

But public faith in facts and official information had been questioned, and we were seeing the beginnings of a moral panic over “fake news”.

Ever determined, we carried on with the work that got us this far. Our Special Projects Editor (and resident crime statistics expert) Joseph O’Leary got straight to work preparing a warning about the latest quarterly crime statistics. He explained that crime in England and Wales would not likely double overnight. Instead, new estimates for cybercrime and fraud were being included in the release for the first time, making the figures look different to before.

We were asked onto BBC Newsround to teach school children how to spot made up news. Joseph travelled up to Wilmslow Grange Primary school in Cheshire to help a class of 8-10 year olds develop healthy skepticism about headlines in the news:

Our Head of Communications and Impact Phoebe Arnold travelled up to the BBC in Salford to take part in a Facebook Live Q&A with the Newsround team.

Our Digital Product Manager Mevan Babakar spoke at the Journalism.co.uk News:rewired event, to give the year’s first (but far from last) update on the progress of our automated factchecking project.

March: working out how good public information is in the UK

We announced the launch of a collaborative project between Full Fact, the Economic and Social Research Council, the UK Statistics Authority and the House of Commons Library: the Need to Know project.

Need to Know, led by our Research and Impact Manager Amy Sippitt, is about seeing what public information people want, looking at how much of it is available now, and identifying where the gaps are, as well as how well it’s being communicated.

You can read more about the data gaps we were trying to resolve in this blog about the process of factchecking the UK’s EU membership fee, and our efforts to find out how many businesses export to the EU.

Nothing much happened in April.

Just kidding! We had an amazing eight weeks factchecking the snap election.

Full Fact is a charity with a small core staff, so in order to factcheck the general election we needed to expand in every department: editorial, communications, tech, press, social media and admin. This brought our numbers up from 11 to 30. We also needed money, so we set up a crowdfunding campaign to raise £100,000.

We made it, raising £100,263 from 1,920 amazing supporters in 48 days. Thanks again to all our incredible supporters and regular donors - we couldn’t have done it without you. To become a donor to Full Fact, click here.

With the election campaign in full swing we got busy factchecking the manifesto launches of the six parties who received 1% or more of the share of the vote in the 2015 election. Just as interesting was what the parties didn’t say.

On top of the manifestos, our factcheckers worked overtime to put a daily factcheck into the pages of the London Evening Standard from May 4 until the election.

We trooped to ITV’s studios to factcheck the first of the election’s national debates. We followed that up by factchecking the BBC’s “Battle for Number 10” leader interviews with Theresa May and Jeremy Corbyn, the Big Debate on the Victoria Derbyshire programme, and the BBC Welsh Leaders’ debate.

Every morning we sent a briefing email to newsrooms around the country giving an update on the election conversation online. We’d send another email in the afternoon highlighting our factchecks and updating journalists on the results of our verification research.

In the run up to election day, we created 18 short factchecking videos which racked up two million views on Facebook and YouTube. We also hosted two Facebook Live Q&A sessions in partnership with Press Association, and participated in a Facebook Live with Change.org where we gave our top factchecking tips.

We posted our final election factcheck at 7pm on the evening before polling day - a factcheck of a misleading infographic comparing Labour and Conservative spending, which took several days to check thoroughly. 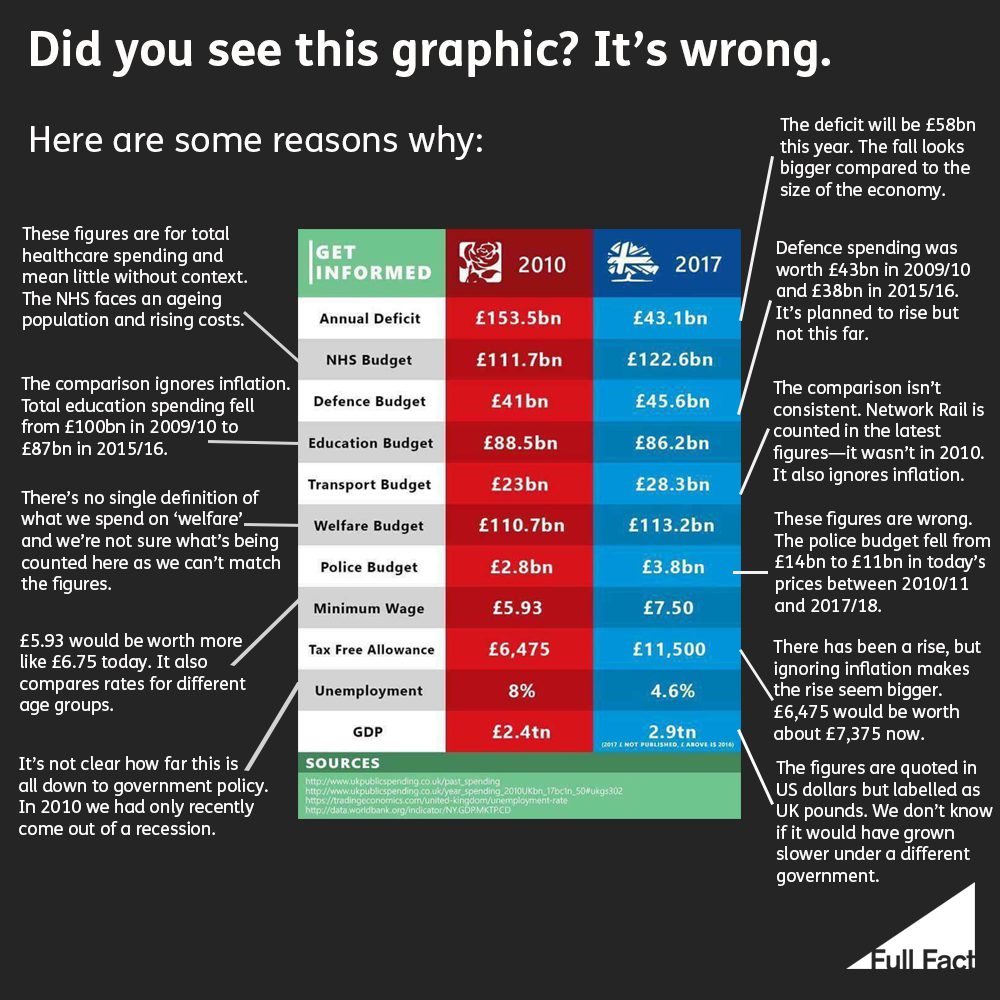 It was shared 12,183 times on Facebook and viewed by 1.6 million people, all without paid advertising. After that, all we could do was sit down with a glass of fizz and wait for the results, along with the rest of the country.

July: we went to the international factchecking conference

Post-election, we went to Madrid for four days. Somehow we managed to bring a heavy storm of hail and rain over from the UK that lasted the entire trip. Luckily, we were busy indoors getting the most out of the Global Fact 4 summit.

Global Fact is an annual conference organised by the International Fact-Checking Network that allows journalists and factcheckers to meet and share experiences of best practice, as well as to discuss how to fight back against the evolving challenges of inaccurate claims and misinformation online.

Amy spoke on a panel about what metrics factcheckers can use to better measure their real-world impact. Being able to produce practically useful evidence of the real-world impact of factchecking is a key objective of Amy’s research.

Mevan also took to the conference stage to showcase our automated factchecking technology, which was good timing, as we’d just announced funding of $500,000 from the Omidyar Network and Open Society Foundations. This allowed Mevan to hire the key engineers she needed to take the project to the next stage.

Aside from hiring her new team, Mevan spent the summer speaking to journalists, from the UK and from overseas, explaining what automated factchecking actually means and where its limits lie. Watch the video below to hear Phoebe discuss the scope of those limitations at the Perugia Journalism Festival:

Mevan also explained how important to the public discourse automated fatchcekcing will become as a tool in countering global increases in misinformation and propaganda.

Her comments were featured in an array of international press over the summer, including the Guardian, GQ Italia, the International Business Times, the Hollywood Reporter and BBC Click on the World Service.

With Halloween just round the corner, a dreaded zombie claim rose from the grave in September, as the price of our EU membership fee returned to the headlines. Our factcheckers sometimes call recurring misleading claims ‘zombie claims’ because no matter how many times you put them down, they keep coming back.

The UK Statistics Authority called the new instance of the claim a “clear misuse of official statistics” and we called for a correction.

We were pleased to see a correction from the BBC (also at our request) for another claim we’d factchecked and found no evidence for: “10,000 jobs have already moved out of the financial services sector following the EU referendum vote.”

And Facebook announced new rules to stop people running political advertising that can’t be traced - something we’ve been calling for over 12 months. We made the case to lawmakers that protections like these should be scrutinised by MPs and written into law - not left to the terms and conditions of private internet platforms.

BBC Click came to the Full Fact office to record a feature on automated factchecking, after it featured on their World Service sister show earlier in the year.

Meanwhile, we put out our first major readers’ survey, designed to evaluate our general performance but more specifically to feed into Amy’s research on how we can make our factchecks do a better job and be more relevant and useful to readers.

The data from the survey is being studied carefully and we’ll let you know what we discovered in due course.

November: finding out how people take in information from tweets

We took a short walk up to Soho to visit Twitter who were kindly hosting the launch of our project with the NRLabs team at the University of Edinburgh on "Persuasive Power in a Digital Age".

The NRLabs team will be using innovative methods like eye tracking (!) to examine what people actually look at when they see factchecks on a screen. They’ll also use fMRI brain scanning (!!) to explore how people’s minds react to factual information.

This is all part of a goal to gain evidence that helps us to understand how to communicate better and make factchecks more memorable, engaging and useful.

Full Fact became involved in a Twitter dispute between Ralf Little and Jeremy Hunt over mental health provision in the UK.

After Mr Hunt appeared on the Andrew Marr show to discuss mental health services, Mr Little called him a liar on Twitter. Mr Little later clarified that he thought Mr Hunt might have got his facts wrong unwittingly. 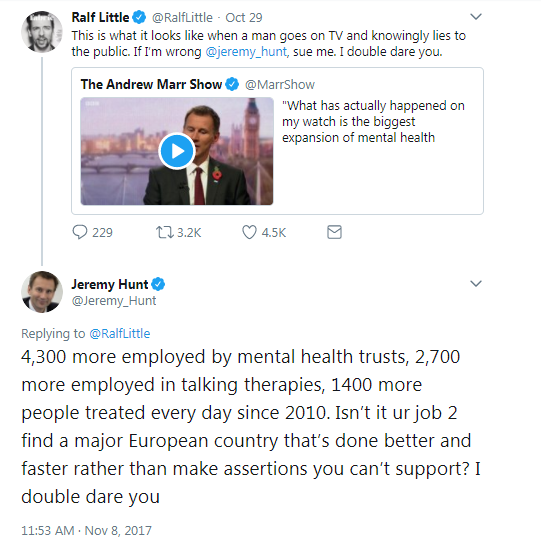 After that, the two swapped dozens of tweets, figures, and examples to back their claims. They clashed on the facts about spending, staff numbers, and crisis care.

Our Health and Social Care Lead Claire Milne led our editorial team in producing a thorough factcheck of the dispute. Who was right? Have a read and make up your own mind.

And finally, 120 volunteers have signed up to help us research the possibilities and limits of our automated factchecking tools. Thanks to all our volunteers! We’ll have more to say on this soon.

Please support independent and non-partisan factchecking with a regular donation: just £10 a month allows us to factcheck more of the claims that matter most, but also take up the most time.

Freedom of Information: slow and effective but can't keep up with elections

After the fact – Jeremy Hunt vs Ralf Little