Government defence spending is 2% of GDP

The Conservative government raised the armed services budget to 2% of GDP.

Defence spending has never been below 2% of GDP in the years we have data for. In July 2015, the Conservative government pledged to spend 2% of GDP on defence in every year to the end of the decade.

The government has committed to keep meeting the target of spending 2% of GDP on defence.

In October 2017, the Defence Secretary described 2% as the “minimum NATO commitment” and said “we should aim to do better still”.

“I guess the Conservative government did raise the armed services budget to 2% of GDP [...] And I, as I understand it, the government has committed to that, to keep that target”.

“I don't know how much. There were some cuts made, but in 2015 obviously the government committed to 2% of GDP.”

In 2015, the government set a target of spending 2% of GDP on defence in every year for the rest of the decade. This target has been met in every year since, although it probably wouldn’t have been without a change in counting methods.

The 2% target is a largely symbolic benchmark set by NATO in 2006, encouraging European states to spend more on defence. The UK has never spent below 2% of GDP on defence in recent decades, according to NATO’s records which go back to 1970. It also has one the highest spending levels (as a percentage of GDP) among NATO members.

In July 2015, shortly after the general election, the Conservative government announced that it was committed “to meet the properly measured NATO pledge to spend 2% of national income on defence every year of this decade.”

In October 2017, then-Defence Secretary Michael Fallon described 2% as the “minimum NATO commitment” and said “we meet it but we should aim to do better still”.

The North Atlantic Treaty Organisation (NATO) was founded in 1949. It’s a group of 29 countries working in “collective defence”, meaning “if one NATO Ally is attacked, then all NATO Allies are attacked”. NATO Allies consult and co-operate on defence and security-related issues.

The House of Commons Library explains that “[t]here is no intrinsic significance to the level of 2%” as a target for defence spending—in fact it’s low by the UK’s historical standards—but it is “politically and symbolically important”.

In 2006, NATO set a target for its members to spend 2% of their GDP on defence, although it does not impose any sanctions or penalties for not doing so. According to the House of Commons Library, the target was put in place to “address the imbalance between the contribution of the USA and NATO’s European members”. It adds, “the difference between a country spending (for example) 2.02% and 1.98% of GDP is considered to be somewhat marginal and shouldn’t be used as a basis for argument.” 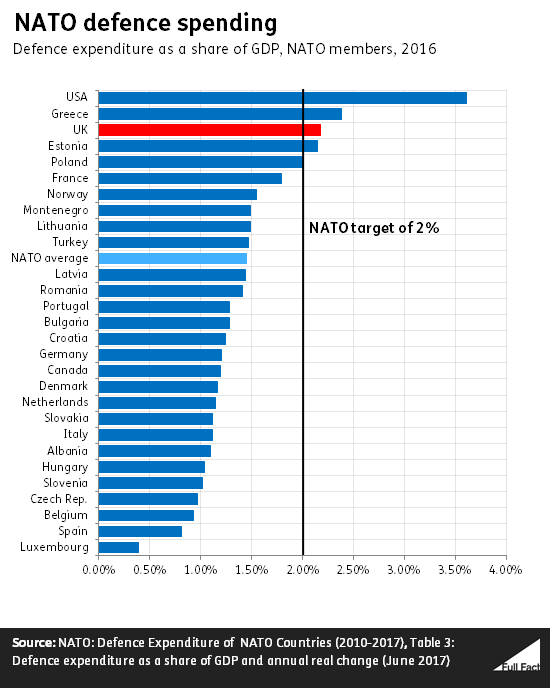 However, in 2015 the UK changed what was counted in its defence spending. War pensions (around £820 million), assessed contributions to UN peacekeeping missions (around £400 million), and pensions for retired civilian Ministry of Defence personnel (thought to be around £200 million) were included for the first time. That’s over £1 billion in spending which was previously not counted in the budget.

The Royal United Services Institute has calculated that, without the change in counting rules, the UK would have been on course to spend 1.97% of its GDP on defence in 2015/16, rather than 2.08%.

The government emphasised that the revised counting method was in line with NATO definitions, and the House of Commons Defence Committee agreed when it examined the spending in 2016.

But the Committee also commented that : “We believe that this ‘redefinition’ of defence expenditure undermines, to some extent, the credibility of the Government’s assertion that the 2% figure represents a significant increase in defence expenditure”.

It recommended that the government also publish figures on what defence spending would be without the new inclusions, which as far as we have seen it has not done so far.

In the two years since then, it has stayed virtually the same in real terms, and between now and 2019/20, spending is planned to increase by 1% in real terms.