Employment: Is employment up only because of zero hours contracts?

We’ve already looked at the extent to which we can actually trust the quality of the employment and unemployment statistics and whether more people are dissatisfied with their hours.

This piece looks at whether there’s any truth in the critique that the rise in employment is down to a rise in insecure work—primarily an increase in the number of people on zero hours contracts. Zero hours contracts do not guarantee a worker a minimum number of hours, and the worker is “on call” to work as and when they are needed.

More people may be in work, the argument goes, but this work is unstable and not guaranteed long-term, so it doesn’t provide the security that normally comes from being employed. Criticisms of zero hours contracts have been made repeatedly by Jeremy Corbyn and others in the Labour Party.

There certainly has been a significant rise in the number of people working on zero hours contracts since 2010. However, even if we were to discount all these people from the employment statistics, employment would still be at record levels today.

Official figures for zero hours contracts have risen sharply since 2011

Before we look at the numbers in detail it’s important to note that critiquing the record employment rate citing the rise in zero hours contracts assumes that these contracts are  sufficiently different from other forms of work (in a negative way) that they should be either split out from, or entirely discounted from, general employment statistics.

In order to address this argument, we’ll look at whether the total employment rate is up because of zero hours contracts. 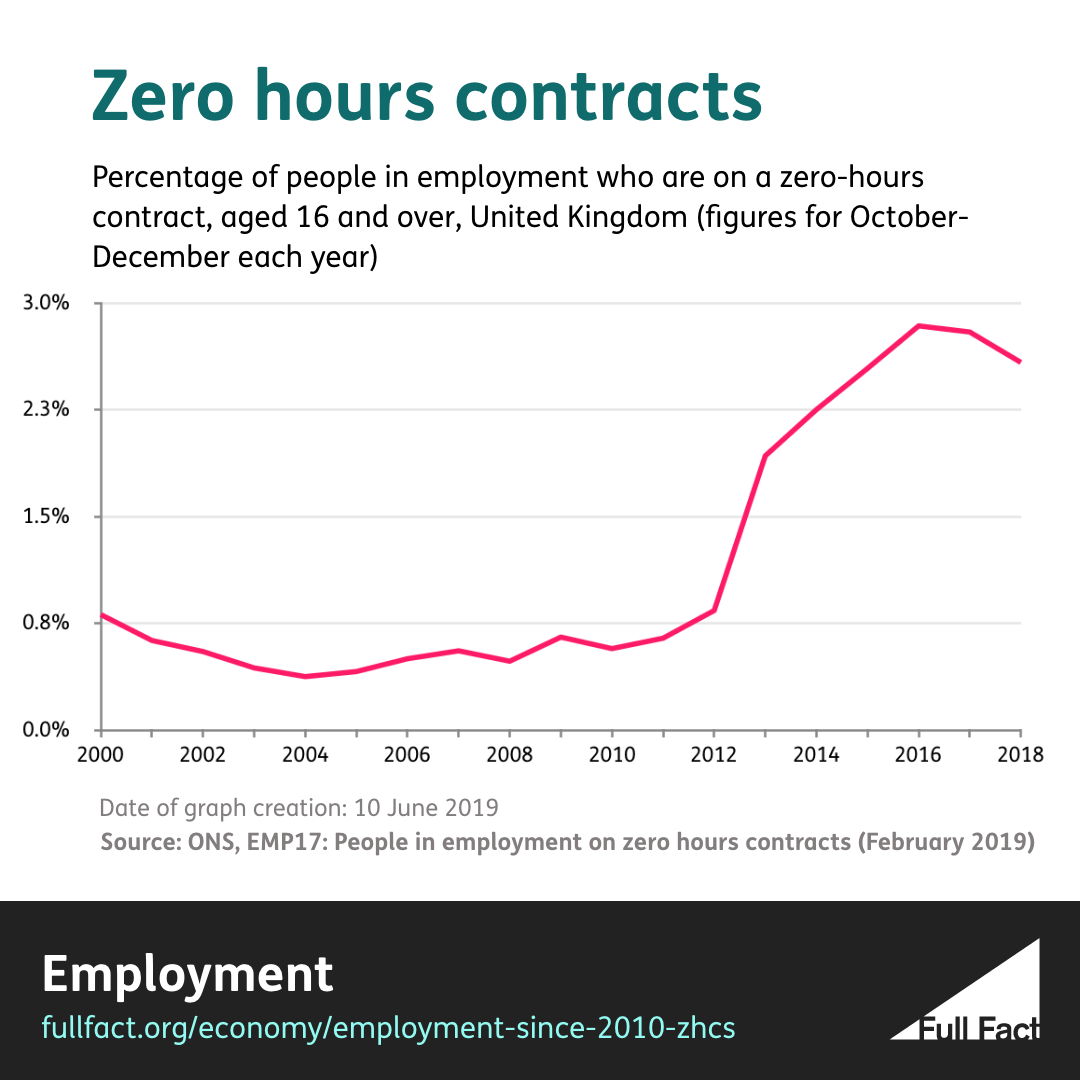 These figures aren’t perfect. It’s possible that this rise may be overestimated, because the Office for National Statistics’ (ONS) survey relies on people self-reporting as being on a zero hours contract, from a list of options.

The ONS says: “The upward trend that we saw [in the number of zero hours contracts] between 2011 and 2016 was likely to have been affected by greater awareness and recognition of the term “zero hours contract.”  In other words, some people might have already been on a zero hours contract, but only realised that was the technical term for it once everybody started talking about the issue.

Judging when people might have become more aware of an issue is tricky. Parliamentary records show that mentions of zero hour contracts took off in 2013 and similarly Google trends shows that searches increase significantly at the same time — a point at which the official figures had already begun trending upwards, but before the large spike of the mid-2010s.

However because people still need to positively identify themselves as being on a zero hours contract, the overall number of people working on them may be underestimated, even while the steepness of the rise may have been overestimated.

We would still have record employment without zero hours contracts

Putting those caveats aside, the employment rate (the proportion of people aged 16-64 who are in work) would still be at a record high even if every worker on a zero hours contract was excluded from the data. 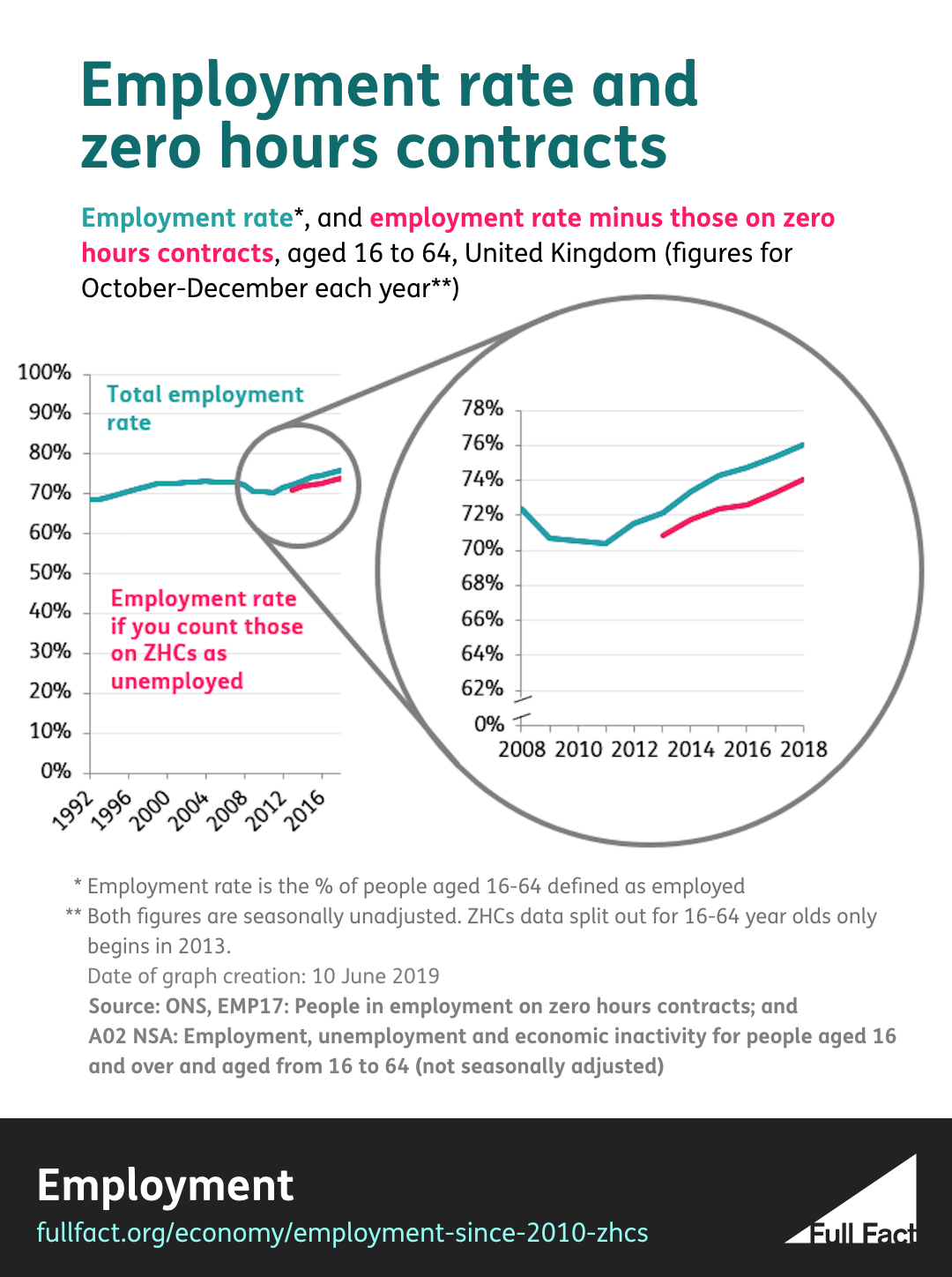 The raw number of people in employment is also at a record high whether or not you count people on zero-hours contracts in the figure. 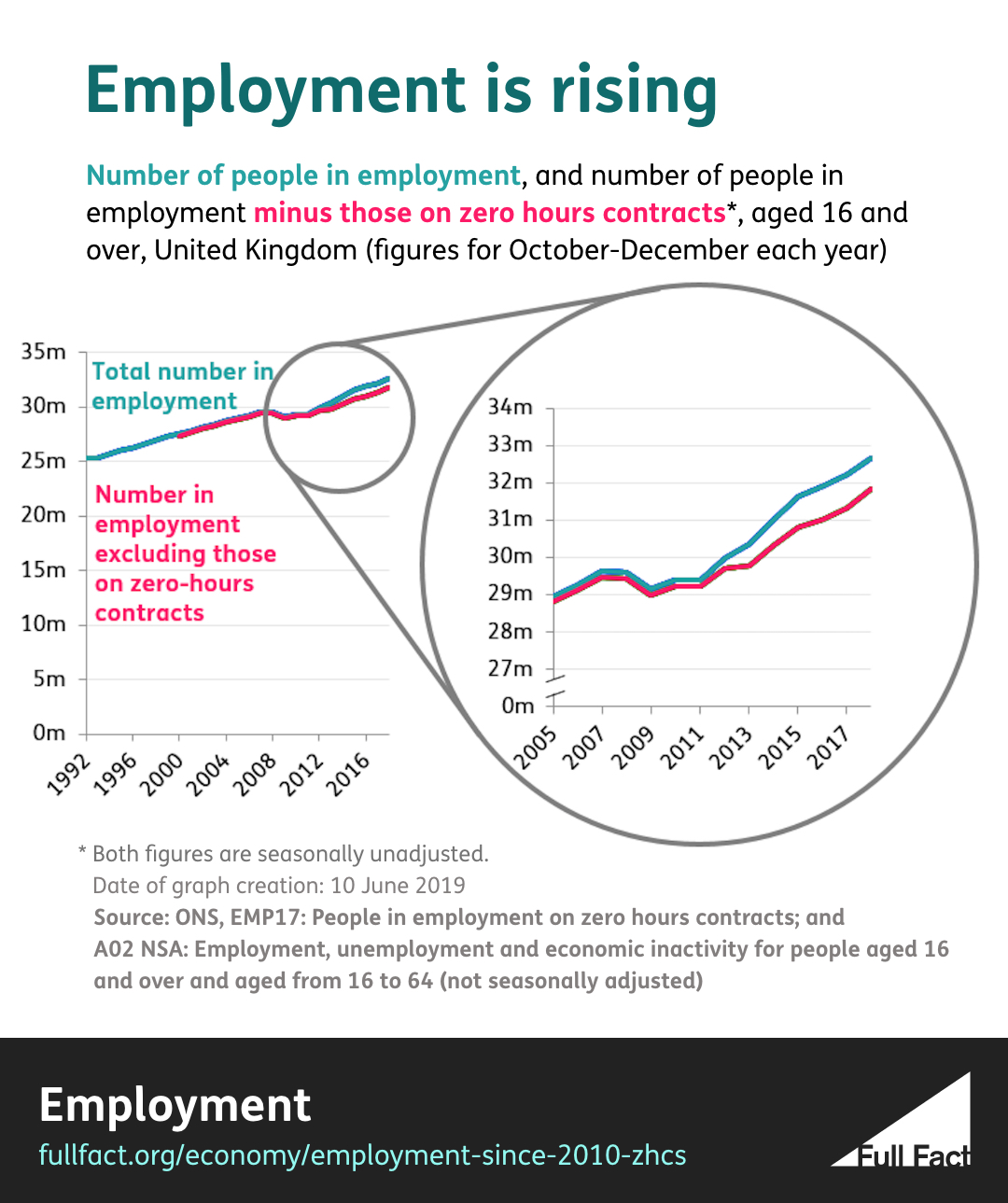 On the other hand the unemployment rate wouldn’t be at its lowest since the 1970s (a line the government is also fond of saying) if it wasn’t for people in zero-hour contracts. 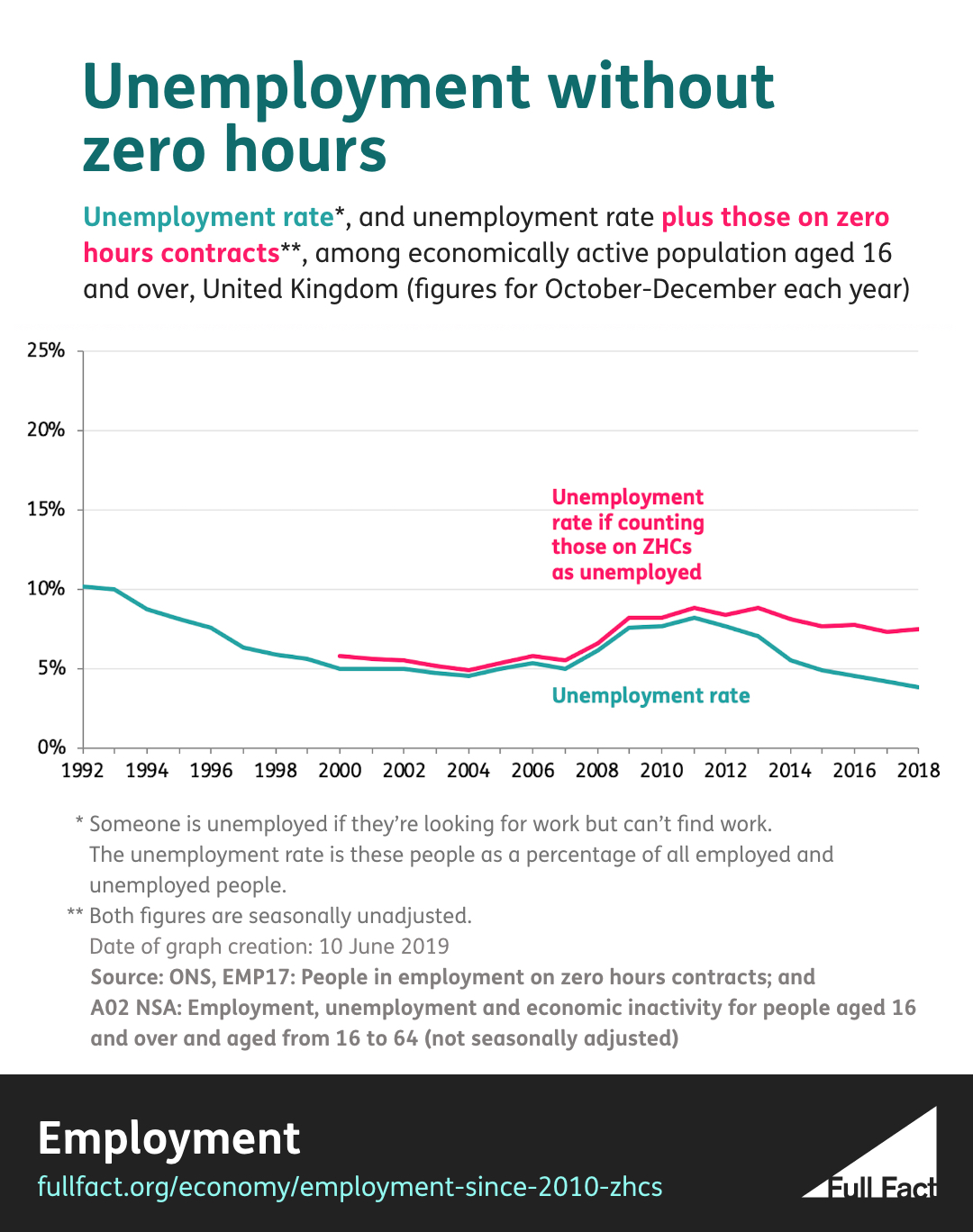 It’s possible however that the unemployment rate wouldn’t be at a record low without the growth in zero hours jobs. But this depends on how much of the recent growth in people on zero hours jobs is genuine, and how much is down to increased reporting of these contracts as mentioned.

Regardless, the unemployment rate would still have fallen since 2010, even if zero hours jobs are discounted.

These aren’t the only factors you might want to consider though. You might want to ask what working conditions are like for this growing group of people employed on zero hours.

As mentioned, there’s evidence that the majority of people on zero hours contracts are not happy with the stability that contract gives them, and there’s also evidence that they do not receive benefits received by other workers. Only 12% of zero hours workers told a survey commissioned by the Trades Union Congress that they got sick pay, 43% didn’t get holiday pay, and half did not get written terms and conditions.

In our next and final article, we’ll look at what’s happened to wages since 2010, and what that means for employment figures.