Is England no longer a nation of homeowners?

"Although we think of ourselves as a nation of homeowners there's been no growth in the rates of home ownership for the past 20 years ...

House prices are in the news again after the Royal Institute for Chartered Surveyors reported today that property sales for the start of 2014 were at a six-year high.

It has raised concerns that not enough homes are being put on the market to stem constantly rising house prices.

One academic from the University of York told the BBC this morning that this is happening on the back of a stagnating trend in home ownership over the last decades, and that fewer young people own their own homes compared to a decade ago.

Home ownership in England is falling

65% of households in England are owner-occupied, 18% rent privately, and 17% rent socially (from a local council or housing association).

The picture has changed radically over a century. In 1918, only just under one in four (23%) of households were owner-occupied (this was for England and Wales, though it's not expected to be significantly different). 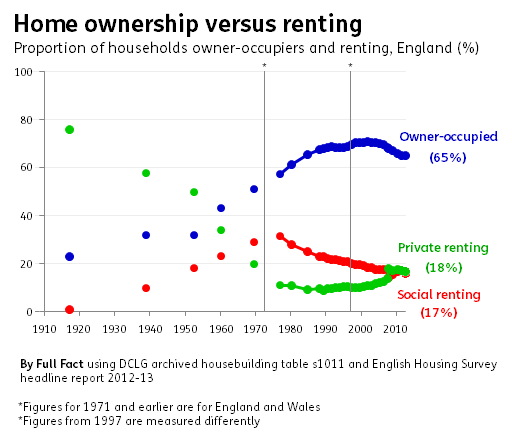 Home ownership increased in the 1980s, helped by the then government's right to buy scheme. Although it's been falling since the mid-noughties, home ownership levels now are similar to those two decades ago.

Younger people are less likely to own their own home

The overall home ownership trend masks a subtext of a declining proportion of young people owning their own home, and this trend exists however you define the age group of a young person.

Professor Tunstall started with one of the more obvious explanations: house prices have been rising relatively quickly over the last decade. More importantly, houses are getting much more expensive compared to the average buyer's earnings.

We explored earlier this year how first-time buyer's average earnings were being increasingly left behind compared the average price of a place to live. 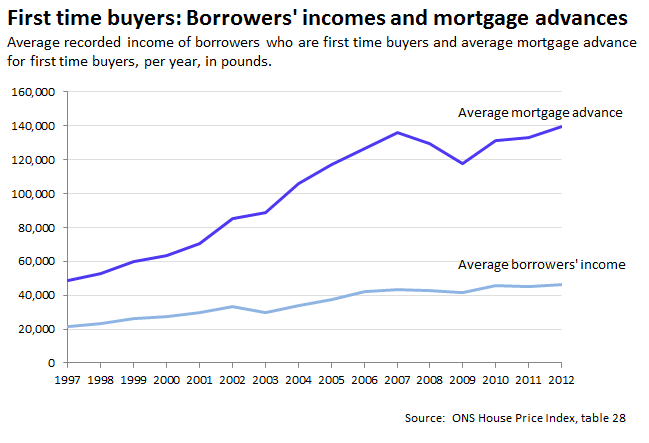 A recent study by the Smith Institute highlighted other possible factors including changing work patterns - with fewer people in secure full-time employment - and even migration from abroad (people who've recently arrived or have foreign passports are less likely to be homeowners).

Professor Tunstall also mentioned that people spending a longer time in education and a longer time before partnering were factors.

We've asked for more details on this. In the meantime, if you know of research in this area that could shed more light, get in touch with us on feedback@fullfact.org.