State expenditure is at a record high.

The amount of money spent by the state is the highest it’s ever been in real and cash terms. But is not at a record high when compared to the size of the economy—the most useful measure.

Funding for schools has increased significantly in recent years.

Funding for the NHS has increased significantly in recent years.

Correct, as it has done throughout almost its entire history.

Funding for pensions has increased significantly in recent years.

The state pension has increased in recent years, but because the pension age has increased, fewer people are now eligible for the pension. So while state spending on pensioner benefits has risen since 2010 it has remained stable in the last few years.

“State expenditure is at a record high, reaching a colossal £841 billion this financial year…

“funding for vital areas such as the NHS, schools and pensions has increased significantly in recent years.”

Columnist Leo McKinstry has argued in the Daily Express that the government should look at reducing waste and inefficiency in government spending, noting that state expenditure has reached a record high, with funding for schools, the NHS and pensions also increasing in recent years.

It’s correct that public spending is £841 billion. This is the amount the government expects to spend in the 2019/20 financial year.

It’s also correct to say this is a record high, both in cash terms and real terms (once you adjust for inflation).

The problem is that these figures aren’t very useful in telling whether state spending is relatively high or low, historically speaking, as the country’s economy and population has changed a lot over the years.

The Office for Budget Responsibility forecasts that public spending in 2019/20 will amount to 40% of the total UK economy.

That’s not a record high. The state has been relatively bigger than it is now during various points in the past hundred years, notably during the Second World War when the UK government planned the economy as part of the war effort. 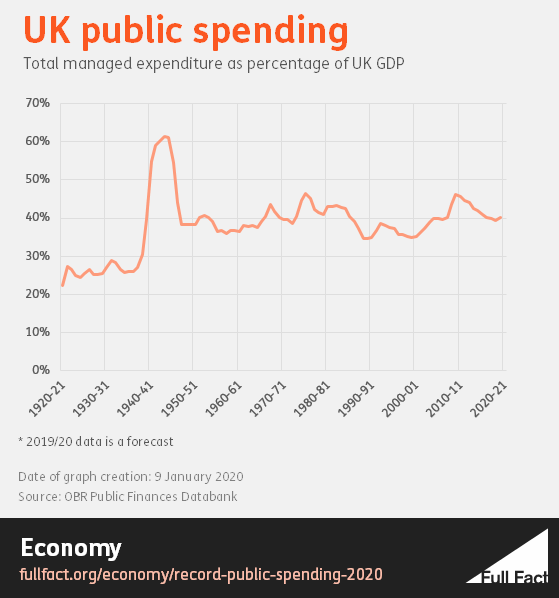 Mr McKinstry also writes that funding for the NHS, schools and pensions has increased significantly in recent years.

However the most meaningful way to look at school spending is not the total spend but the spend per pupil which is now 8% lower than it was in 2009/10. Government commitments to increase education spending over the next few years will take spending per pupil back up to that 2009/10 level by 2022/23.

Health spending in England has increased in recent years, though it has increased for almost the entire history of the NHS. This is partly because demand for healthcare has continued to grow as the population grows and ages.

In 2018, then-Prime Minister Theresa May announced a funding increase for the NHS in England, averaging 3.4% per year until 2023/24.

This was welcomed by health think tanks the Nuffield Trust, Health Foundation and King’s Fund, and others like the Institute for Fiscal Studies (IFS), who have said that the money will allow the NHS to “help stem further decline in the health service”.

But they said that increases of at least 4% a year on average are needed in order to meet the NHS’s needs and see any improvement in its services.

On pensions the picture is complex.

The state pension has increased in recent years due to the decision in 2010 by the coalition government to bring in the “triple lock”, meaning the state pension increases each year by earnings, prices or 2.5%—whichever is highest.

The amount of money spent on pensioner benefits in total has increased by around £8 billion since 2010, but since 2014 has remained fairly stable in real terms at around £128 billion per year.

Deputy Director at the Institute for Fiscal Studies Carl Emmerson told us: “The triple lock has, since 2010, pushed up pensioner benefit spending substantially in real terms. But in the other direction the increases in the state pension age for women and, more recently, men will have cut it.”

In other words, the government has increased the average amount a pensioner will receive, but reduced the number of pensioners by increasing the pension age.