Most people made homeless by the Grenfell Tower fire are not in permanent accommodation.

Correct. Just under two-thirds of the 210 households who were residents of Grenfell Tower or Grenfell Walk are not in permanent accommodation.

201 of the 210 households have accepted or moved into temporary or permanent housing.

The most recent figure as of 17 May is 202, according to Kensington and Chelsea Council.

“Most of the people made homeless by the Grenfell Tower fire are not in permanent accommodation.”

“We have 201 of the 210 households who have accepted or moved into temporary or permanent accommodation.”

Most households that lived in Grenfell Tower or in neighbouring Grenfell Walk made homeless by the fire have not yet moved into permanent accommodation. It’s also correct that most have accepted or moved into temporary or permanent housing.

According to Grenfell Support, a Kensington and Chelsea council-led initiative, 75 of the 210 households from Grenfell Tower and Grenfell Walk have now moved into permanent homes. This is just over one third.

They say 63 households have moved into temporary accommodation, while 72 are still in emergency accommodation. These figures are accurate as of 17 May. 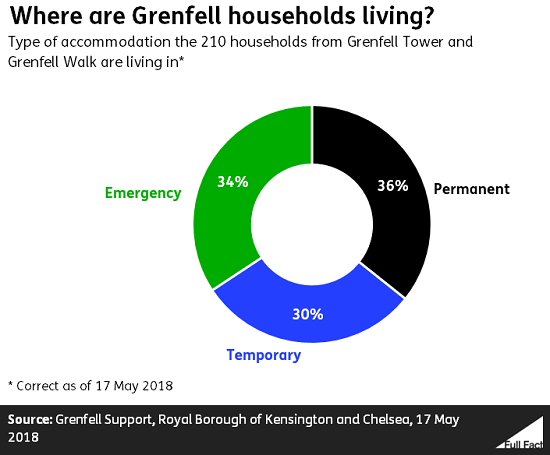 The Royal Borough of Kensington and Chelsea told us the most up to date figure as of 17 May was that 202 households had now accepted or moved into temporary or permanent homes. This 202 figure can’t be reached from Grenfell Support’s published figures, which do not break down what kind of accommodation the people who have accepted offers are currently living in.

The Ministry of Housing, Communities and Local Government said that Dominic Raab gets bi-weekly updates on the figure, and when BBC Question Time was recorded he had most recently been briefed with Monday’s figure of 201.

During a Commons debate on 16 May on the Grenfell Tower tragedy, Secretary of State for Housing, Communities and Local Government James Brokenshire said there were “people who have accepted an offer of a permanent home still living in emergency accommodation”.

Grenfell Support also say that “households currently living in temporary accommodation provided by the Council or our partners, also have the option to make these properties their permanent home if they wish.”

Rehousing in the wider Grenfell area

After the fire, 128 households moved out of their homes in the area surrounding Grenfell Tower. 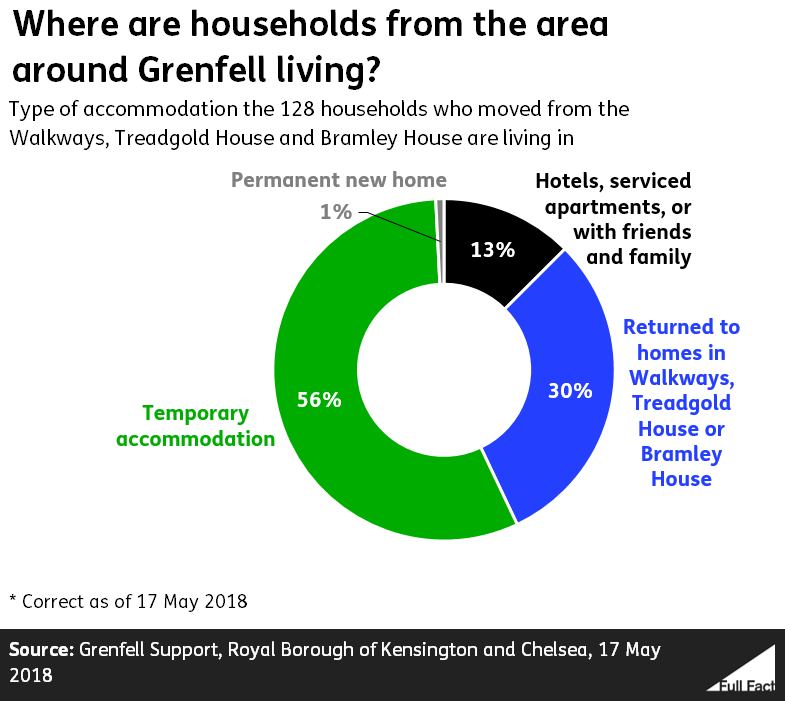 Grenfell Support updates their rehousing figures for Grenfell Tower and Walk residents and wider Grenfell area tenants once a week. Since this article was originally written new figures have been released.

For households in the wider Grenfell area, the figures are largely the same, although one less household is in a hotel, serviced apartment or with friends and family, and one more is in temporary housing.

We added a section about rehousing in the wider area around Grenfell Tower.