Wages are rising at their fastest rate for a decade.

That’s correct but it doesn’t account for inflation. When you factor in rising prices, real wage growth is at its highest in two years.

“UK workers get biggest pay rise in a decade”

Headlines about the latest data on people’s earnings from the Office for National Statistics (ONS) are focusing on the claim that wages are rising at the fastest pace in a decade. But these ignore something important.

It’s correct—as you’ll read in several places—that average weekly wages in Great Britain are growing at their fastest rate since 2008, but only if you don’t adjust for inflation. The problem is that failing to adjust for inflation (the rise in how much things cost over time) can give a misleading impression of how these statistics reflect people’s lives.

We don’t have to look far to see how things look adjusted for inflation (what’s known as “real terms”, as opposed to “nominal” or “cash terms” for the non-adjusted figure), as the ONS says this clearly in their release:

This means wage growth can look quite different depending on which measure you look at. 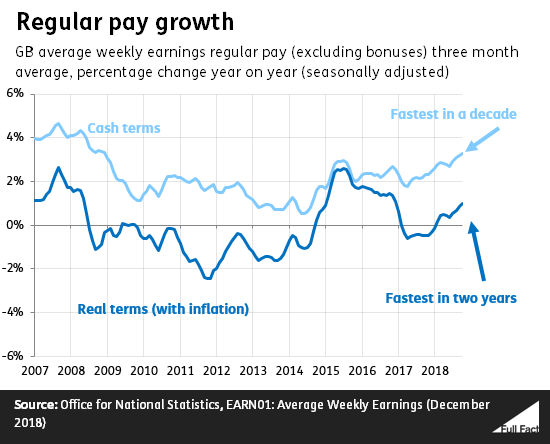 You can see the same effect if you look at “total pay” instead of “regular pay”, which includes how much people are paid in bonuses. 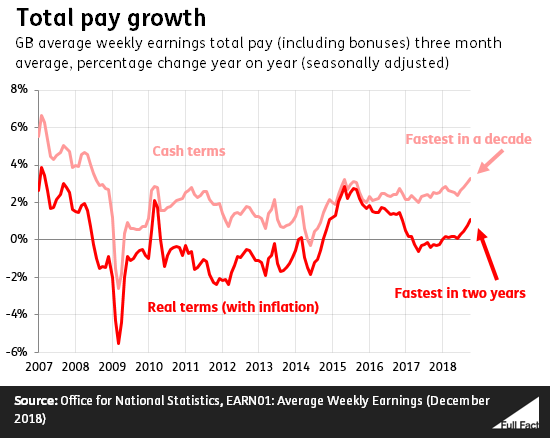 This matters because, as we’ve seen from several recent Prime Minister’s Questions, this is a headline claim used by the government, alongside correct claims about the employment rate being at a record high, and unemployment rates at their lowest in over 40 years.

But this view on wages simply doesn’t give the best picture of what’s happening to people’s pay.

Quoting the non-adjusted figure isn’t wrong; it is useful to know both the figure before and after adjusting for inflation. But at the very least news reports should say clearly that this is what they’re doing―and give the real terms figure alongside it.

We got in touch to request a correction regarding a claim made by Elizabeth Truss in Parliament.