Ask Full Fact: the UK’s trade with the EU

Britain sends 50% of exports to the EU and only 8% to the 'BRICS' economies (Brazil, Russia, India, China and South Africa).

A reader has asked us to look into whether 50% of the UK’s exports go to the EU, compared with 8% to the BRICS countries—Brazil, Russia, India, China, and South Africa.

It’s correct to say, as the BBC’s Justin Webb did yesterday, that trade patterns seem to be shifting. While the EU remains our largest market by some distance, over time we’re selling less to the EU and more to other economies as a proportion of total trade.

In 2014, British companies sold around £515 billion worth of goods and services to foreign buyers, according to the Office for National Statistics. £229 billion of those earnings came from the European Union—so 44%, not 50%. 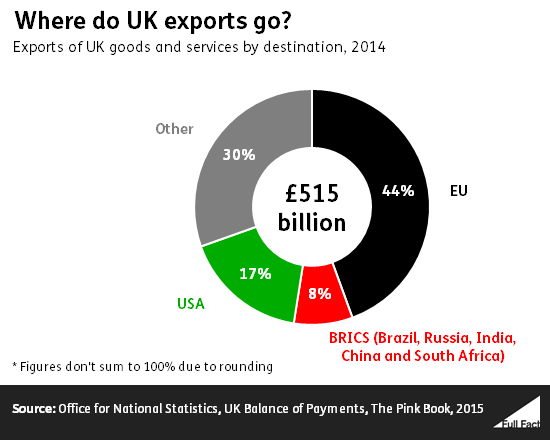 It would be 50% if you were looking only at goods exports, and excluding services.

But there are good reasons to take Lord Rose as meaning all exports. The Stronger In campaign that he leads has previously told us that it means goods and services when making this claim. Ignoring services would also exclude over 40% of the UK’s total exports.

The figure of 8% of all exports going to the BRICS countries is correct.

50% would have been right a few years ago, but we’re doing more business outside the EU

“The BRICS countries’ [share of UK exports] is growing and the EU is diminishing, that’s true isn’t it?”

“You have to multiply over a long period before you get anywhere close to the 50% that we’ve got with the EU.”

To say that 50% of British exports go to the EU would have been correct as recently as 2008. But the proportion has fallen below half over the past few years. The absolute amount of exports earnings has also fallen slightly, from £242 billion in 2011 to £229 billion in 2014. And that doesn’t account for inflation.

Meanwhile, exports to the BRICS have risen from around 5% of the total a decade ago to 8% in 2014. That would be 10% if you included exports to Hong Kong, which isn’t considered part of China in these statistics. 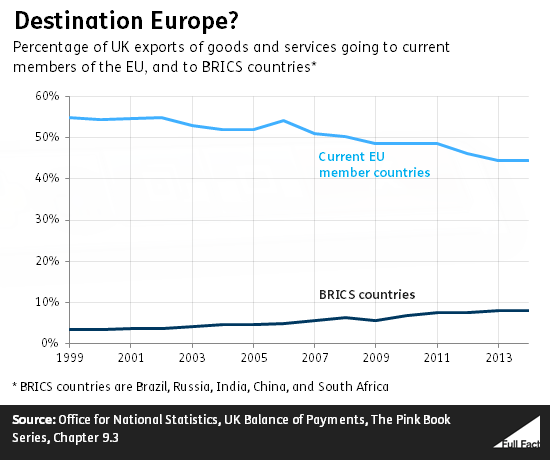 Lord Rose is right that the 27 other countries of the EU, taken as a group, remain by some distance our largest market.

Both the ONS and the government's review of our EU membership have concluded that it's hard to quantify the extent of this ‘Rotterdam effect’ or establish whether it's a serious problem for the statistics.