British influence in the EU Council of Ministers

The UK share of the vote in the EU Council of Ministers is 8%, down from 17% when we joined.

It has declined, but a new system based on population makes the UK's vote worth 13%. A lot of Council decisions are made by consensus after negotiation, so vote share doesn't neatly capture the UK's influence.

It's correct that the formal voting weight of the UK in the important EU Council of Ministers has decreased over the years. 8% was right before a recent change in the system that pushes the UK's influence back up to around 13%.

While this is the formal position, the EU's culture encourages countries to all agree on decisions. On some issues, the rules require this.

Several Leave campaigns paint a picture of declining British influence in the EU institutions that make the big decisions.

One of these is what's often known as the Council of Ministers, because it's a committee of government ministers from the different member countries. Along with the European Parliament, it passes most EU law.

As more countries joined the EU, the share of the vote held by any one country was diluted.

But the Council voting system changed from November 2014. Larger countries like the UK "are seen as the main beneficiaries of the change", according to the independent European Parliamentary Research Service.

The new system makes population more important. The UK has almost 13% of the EU's population, and now has that share of the vote.

The old system can still be used in votes up to the end of March 2017, if a country requests it. 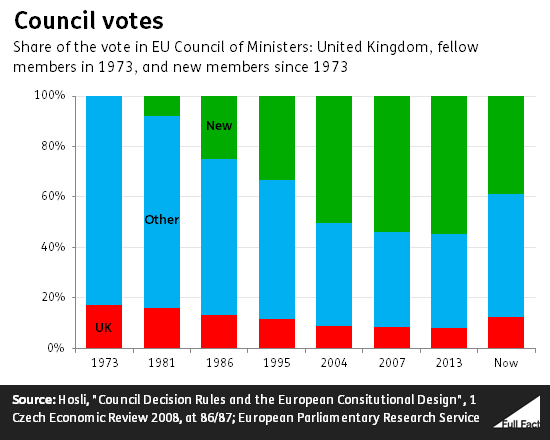 The UK can veto some laws alone, but needs three allies to block others

Not all EU decisions affecting the UK can be passed against its wishes. Some important issues can only be decided if every country voting agrees.

These areas include foreign affairs, taxation, justice and the EU budget. If the UK is adamantly opposed to a law requiring unanimous approval, it's unlikely to make it as far as a vote.

But in other areas, majorities are enough. Under the new system for majority voting, a law has to pass two hurdles.

The UK naturally counts for only 1/28th from this point of view.

But there is a second condition: population matters. Member states representing 65% of all the people in the EU have to vote for a law before it passes.

The ability of the UK to combine with a couple of other big countries to block a law it doesn't like is made more difficult by a rider to this rule. You can get to 36% against a proposed law from just three countries, but they won't be able to block it unless joined by at least one more.

In other words, if fewer than four countries oppose or abstain on a law in the Council, it passes.

Let's say the European Commission has proposed a new law on air pollution. When it gets to the Council, Germany, Poland and the UK vote against it, but all other countries are in favour. It has 25 out of 28 votes, passing the first test, but only 64% of the votes by population. It still passes the second test, even though it hasn't hit 65%, because there are only three countries not voting for it.

But if another country joins the Nos or abstains, the law then fails. It doesn't matter which country it is, in this scenario—it could be tiny Cyprus or Malta.

We recommend playing with the EU's vote calculator to get the hang of how this works.

Traditionally, decisions are made without the need for a vote

A lot of experts say that voting isn't where the action is when it comes to Council decisions. In a lot of cases—75-80% of the time—every country votes for the proposal on the table.

There are a lot of reasons put forward to explain this consensus. It doesn't mean that the vote, or at least the prospect of a vote, isn't important. A lot of work goes on behind the scenes to prepare laws that everyone can support, as there's ultimately no point in pushing something to a vote when many countries oppose it.

The UK usually votes with the majority, but is now on the losing side more than any other nation

When votes are taken, the UK has recently been on the losing side more often than any other country.

It still voted on the winning side nearly 90% of the time over the past six years, according to academics at the London School of Economics.

So the UK has to accept some EU decisions that it didn't vote for.

Not every decision is equally important. The authors also point out that simply counting votes lost doesn't take into account how strongly British officials feel about them compared to the votes they won.