"Pulling out kids' teeth because of sugar costs the NHS around £30 million per year." 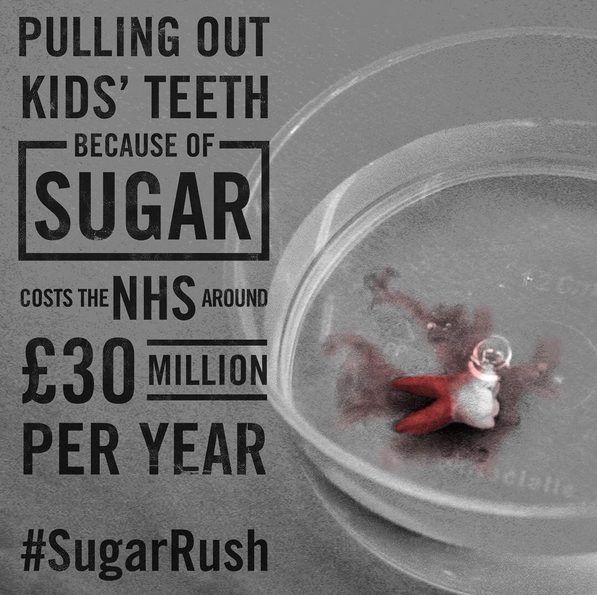 A reader has forwarded us this striking image, posted on Jamie Oliver's Instagram page last week. It's part of the publicity for the chef's Sugar Rush television programme, and his campaign for a tax on sugary drinks.

We've been told by the campaign that it comes from the British Dental Association (BDA), which says in an infographic:

"The NHS spent £30 million on hospital-based tooth extractions for children aged 18 years and under in 2012-13".

That's right, according to Department of Health data.

But in changing the wording to take out some of the specifics, the Sugar Rush campaign has introduced a couple of inaccuracies. We don't have exact figures for how much the NHS as a whole spends on pulling teeth.

Even if we did, we wouldn't then know how much of that is due to sugar.

The latest figures say hospital trusts alone spent about £34 million in 2013/14 on tooth extractions for those aged 18 or under. That was for 44,000 spells of treatment. Trusts spent another £16 million on the surgical removal of teeth.

But most NHS dental work is performed by high street dentists, who extracted a tooth or several teeth from NHS patients on over half a million occasions that year.

It's not possible to calculate how much is spent on these extractions using the costs for the same procedure in hospitals. The figures may not be comparable. For instance the cost per procedure may be lower on the high street, especially if the children who end up in hospital are in a more serious condition than those in dental surgeries.

Even if we did have an overall figure, we wouldn't know how many of the extractions were to do with sugar. Some children have teeth removed when getting braces fitted at an orthodontic surgery, for instance. Others may need extraction after an injury.