Are there fewer Passport Office employees to deal with a half a million backlog?

"It is not true that the number of staff at the Passport Office has gone down; the number has gone up." Theresa May, 10 June 2014

"Today we learn the Passport Office has had major staff cuts in the last four years." Yvette Cooper, 11 June 2014

With warm weather finally upon us, many reader's minds may be turning to their summer holidays. So too has the news agenda, with the Mail reporting that as many as half a million people could have their plans ruined by "chaos" in the Passport Office.

Labour has pointed the finger at the government, saying it cut jobs at the Passport Office. The Home Secretary however says that this isn't correct.

While the Home Office has said that there are currently close to half a million passport applications open, this doesn't necessarily mean that this is a 'backlog'. Passport Office data also shows that staff numbers have reduced since 2010, although more staff may have since been taken on that are not covered in the most recent figures.

Half a million applications, but not necessarily a backlog

The claim that the queue for a passport contains 500,000 applications is drawn from a letter sent by the PCS union to the chief executive of the Passport Office, which threatens strike action against alleged job cuts.

We've been in touch with the PCS union who told us that the estimate was based on Passport Office figures. Some outlets have reported that:

"The Home Office says it currently has about 465,000 applications, made up of renewals and first time passports."

Similarly Home Office minister James Brokenshire told the BBC yesterday that applications were at a 12-year high. Unfortunately, the data behind these claims isn't published: we spoke to the Home Office who confirmed that it hadn't released the figures and would not give them to us to judge for ourselves.

However, even if this is accurate, it doesn't necessarily mean that there is a backlog of that half a million or that, as Labour Leader Ed Miliband put it at yesterday's Prime Minister's Questions, that "that is tens of thousands of people who are finding that their holidays are cancelled because they're not actually getting a passport."

David Cameron claimed instead that while application numbers were high by recent standards, 90% were being processed within three weeks.

Again, there's little published information that can back this up. Data released in a Parliamentary Question shows that 2013 saw an increase in the number of applications on previous years, but no more recent figures are available.

Similarly, target data from the Passport Office suggests that it was meeting its aim to process at least 90% of passport applications within three weeks in 2012/13, it can't tell us how this has changed in response to a recent surge in demand. The Passport Office said yesterday that 97% of applications had been processed within three weeks in the first five months of the year, but again no further details are publicly available.

Staff levels up this year, but down since the election

There is slightly more clarity when it comes to untangling the various claims about staffing levels at the Passport Office.

We asked for details about Mrs May's claim from the Home Office, who told us that "at the end of March HMPO had 3,444 full time staff — up more than 300 since 2012."  These again seem to be unpublished figures, but we can at least put these into some sort of perspective.

Using the average number of staff employed by the Passport Office declared in the organisation's annual reports, we can see that while the number claimed to be working there in March this year is higher than at any point since 2012, it is still lower than the 3,900 on the Passport Office's books in the 2009/10 financial year.

Whether or not this means the Passport Office is worse equipped to deal with the volume of applications it is currently receiving is another matter. The Home Office also claims that it has drafted in staff from other parts of the organisation, extended working hours and increased staffing levels in outsourced parts of the business to help meet the demand.

Since writing the article we've been pointed to Office for National Statistics figures for staff levels at the Passport Office, compiled historically by the Institute for Government. These show a similar long-term picture, in more detail: 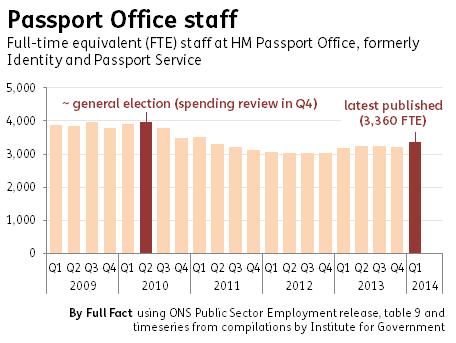