Muslims in the UK: the viral poster, factchecked

An image full of claims about Muslims in the UK has gone viral on social media. A lot of them are incorrect, and we’ve looked at the facts. 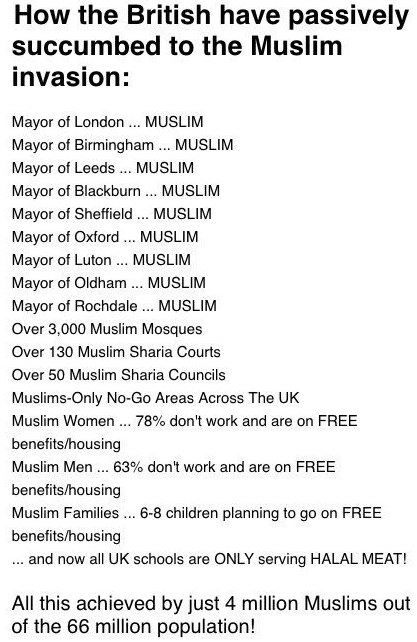 Broadly, there are two different types of mayors in England and Wales – elected and civic. If you include them both, all of these places have had a Muslim mayor, but they don't all currently have one.

Civic mayors perform ceremonial duties and chair the local council, but unlike directly-elected mayors, they do not make decisions about council business.

There have been two directly-elected mayors in the UK who are Muslim - Sadiq Khan, the current Mayor of London, and Lutfur Rahman, Mayor of the London borough of Tower Hamlets from 2010 to 2015.

There are many more civic mayors, both past and present, than directly-elected mayors across England and Wales, and their religion is not a matter of public record. However, mayoral offices for Birmingham, Leeds, Blackburn and Darwen, Sheffield, Oxford, Luton, Oldham, and Rochdale all confirmed that they have had at least one Muslim mayor.

Conclusion: This figure is probably too high. Although there is no definitive source, the true figure is likely to be between 1,000 and 2,000.

Counting the number of mosques in the UK is difficult, as it is for churches, synagogues and other places of worship. Definitions can vary from purpose-built premises to hired halls and multi-faith chaplaincies.

The Home Office maintains a list of premises that have been registered for marriages under the Marriage Act 1949, but this is far from definitive.

Mosques are under no obligation to be recorded under the Marriage Act. Further, British Religion in Numbers notes that not all redundant properties are de-registered and although religious denomination is included in the register, this may be recorded in all sorts of different ways, including misspellings, which makes identifying mosques a challenge.

In our own analysis of these registrations, we identified about 1,300 out of nearly 30,000 records where religious denomination indicated the registration of a mosque, for example “Muslims”, “Moslem”, or “Sunni”.

According to MuslimsInBritain.org, which maintains an unofficial directory of mosques in the UK and Ireland, “there are currently 2,864 locations listed” though cautions that “about 1,850 are mosques, prayer rooms and shared places”, with the remainder defunct, multi-faith, or uncertain.

Claim: There are over 130 Sharia Courts and 50 Sharia councils in the UK.

Conclusion: There is no difference between a Sharia council and a Sharia court, and no definitive figures for how many there are. Around 30 major Sharia councils have been identified, rising to “85 at least” when smaller councils and online forums are included. They aren’t formal courts of law and cannot overrule national law.

Sharia courts and Sharia councils both refer to organisations set up to make decisions according to Muslim religious law – there doesn’t appear to be a distinction between a court and a council in this context. They aren’t formal courts of law and cannot overrule national law.

From the research that's been done to date, it's not clear how many exist or how many different types there are. Research from the University of Reading identified 30 major councils but acknowledged that smaller local Sharia councils had been missed.

An estimate of “85 at least” was given in a 2009 report by the think tank Civitas. However, this estimate includes online forums and the report acknowledges that the actual number is “indeterminate”.

So far as we are aware, there is no definitive number.

You can read more about Sharia courts in the UK here.

Claim: There are Muslims-only “no-go areas” in the UK.

Conclusion: There is no formal definition of a no-go area. The Metropolitan Police and the Foreign Office say there are no areas where the law can't be enforced in the UK. The police service inspector has commented there are "communities from other cultures who would prefer to police themselves" which the police are never called to, though he doesn't specify whether these are Muslim.

A pamphlet issued by the Hungarian government made claims of “no-go areas” across Europe, including the UK. In an interview on Newsnight in September 2016 the Hungarian Foreign Minister Péter Szijjártó said these claims came from “the news and official reports of the police”.

We haven’t been able to find the police reports he refers to, and at the time a spokesperson for the Foreign Office said "there are no areas in the UK in which the laws of the UK cannot be enforced."

In December 2015, Donald Trump made similar claims in the context of Muslim immigration, saying “there are places in London… that are so radicalised that the police are afraid for their own lives”. The Metropolitan Police denied this, insisting “Mr Trump could not be more wrong”.

It has been suggested by the Chief Inspector of Constabulary that in some communities from other cultures the police: “never hear of any trouble because the community deals with that on its own. It’s not that the police are afraid to go into these areas or don’t want to go into those areas.” He doesn't specify here whether he is talking about Muslim communities in particular.

Claim: 78% of Muslim women don't work and are on free benefits/housing.

Claim: 63% of Muslim men don't work and are on free benefits/housing.

The unemployment rate amongst Muslim women was 16% and for Muslim men was 11% in 2015. A further 58% of women and 24% of men were deemed ‘economically inactive’ - meaning they are not employed and not seeking employment, for example students or retirees.

This compares with an unemployment rate of between 5-6% for all men and women in the same period, with economic inactivity around 30% for men and 42% for women.

An inquiry on employment opportunities for Muslims in the UK by the Women and Equalities Committee noted that the reasons for the unemployment disparity between Muslims and non-Muslims are varied and complex, and include “discrimination and Islamophobia, stereotyping, pressure from traditional families, a lack of tailored advice around higher education choices, and insufficient role models across education and employment.”

We have covered unemployment amongst Muslim women before.

Conclusion: In England and Wales, the average Muslim household with children has 2.3 children, compared to 1.8 for households overall. We're not aware of any figures for benefits and housing by religion.

In England and Wales, the average household has 1.8 children (leaving out those without children) while the average Muslim household has 2.3. A household is counted as Muslim if the ‘household reference person’ is (usually the person who works the most hours).

We’re not aware of any data on benefit claimants by religion. We do know, for example, that 27% of Muslim households in England and Wales live in social housing compared to 18% of households overall, according to the 2011 census.

Claim: All UK schools are only serving Halal meat.

Conclusion: Incorrect. Schools can choose whether or not to serve Halal-only meat. Many don’t.

School governors are responsible for the provision of food in schools. There is no specific guidance on Halal food or any dietary restrictions relating to religion. Individual schools may choose to provide Halal food, especially in schools with a high proportion of Muslim pupils.

It appears that some schools may choose to serve only Halal meat. However, it’s not true that all schools only serve Halal meat. Many schools, councils and caterers provide up-to-date menus that contain pork.

We have discussed controversies about Halal meat before.

Claim: There are 4 million Muslims in the UK.

Conclusion: Incorrect. The Muslim population is estimated to be 3.1 million in 2015, out of around 65 million.

There are around 3.1 million Muslims in the Great Britain according to an ad hoc analysis of the Annual Population Survey in 2015. This is about 5% of the total population.

More reliable, if outdated, figures are available from the 2011 census which found that there were 2.8 million Muslims in Great Britain at that time, 4.6% of the total population of 61.4 million.

Though these figures are for Great Britain only, there were only around 3,800 Muslims in Northern Ireland in 2011 so the number of Muslims in the UK is only marginally higher than those in Great Britain.