Are Muslim women more likely to be unemployed?

Muslim women are three times as likely to be unemployed, and twice as likely not to be in the jobs market in the first place, compared to women generally.

“Muslim women are the most economically disadvantaged group in British society, according to a report by MPs.

They are three times more likely to be unemployed and looking for a job than women generally and more than twice as likely to be economically inactive, the Women and Equalities Committee said.”

These figures are all correct, according to official data.

The report published today by MPs on the Women and Equalities Committee doesn’t actually say that Muslim women are three times more likely to be unemployed.

But their inquiry was given figures by the Department for Work and Pensions, published separately, which show that the unemployment rate in that group was 16% in 2015.

The unemployment rate refers to the proportion of those in work, plus those seeking and available to work, who are unemployed. Everyone else—people who aren’t seeking or available for work at all—are termed ‘economically inactive’.

The unemployment rate for all women (aged 16 and up) in the same year was around 5%.

Muslim men were less likely to be unemployed than Muslim women, but were still twice as likely to be out of work as men generally.

In both cases, the unemployment rate has been falling over the last five years, but that’s also been the case among the population generally.

It’s fallen by about one third among Muslim women and all women, so the gap hasn’t narrowed. 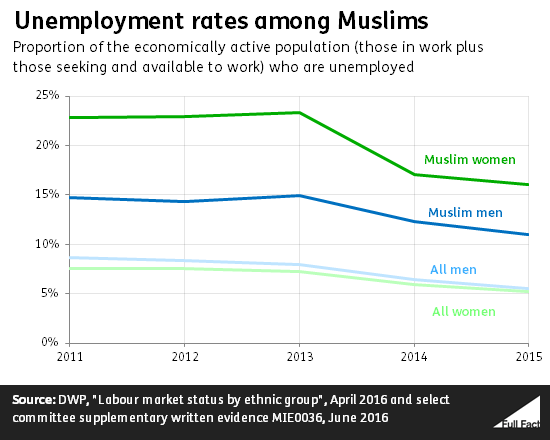 Higher unemployment for Muslim women can’t entirely be explained by things like English language skills, education levels or religious objections to working certain jobs, according to a study carried out at the University of Bristol in 2015.

That found that Muslim women were 71% more likely than white Christian women to be unemployed, even comparing women with similar language abilities, education, marital status, number of children and strength of religious belief. The author, Dr Nabil Khattab,  suggests that this could be attributed to discrimination.

That’s backed up by studies showing that CVs sent out under ethnic minority names are less likely to result in an interview offer, even if the qualifications and experience listed are similar to other applications.

The BBC is correct that Muslim women are twice as likely to be out of the labour market—'economic inactivity' again—although this also isn’t a point made specifically in today’s report.

A major reason for this is to look after the home or family, in the case of Muslims, whereas only a small proportion of women nationally give this as a reason, according to analysis of the 2011 census by the think tank Demos.