How much has the government recouped from tax evasion and avoidance?

The government has secured almost £160 billion extra since 2010 as a result of tax compliance activities.

Correct according to HMRC estimates, but a large part of this figure covers money the government thinks it will get in future as a result of actions already taken, rather than money actually saved so far.

“We have taken action collectively as a Government over the last few years since 2010 when we first came in, and we have secured almost £160 billion in additional compliance revenues since 2010”

This is correct according to HM Revenue and Customs’ own estimates, but ‘secured’ here is a very broad term—a large part of it covers money the government thinks it will get in future as a result of actions it has already taken, rather than what it has actually saved so far.

HMRC has a compliance function that tries to stop the loss of money through tax evasion and avoidance. Each year they try to prevent some money being lost before it happens, recoup some of the money they do lose, and through those actions try to prevent losses in future years. The money they estimate they have secured through all these activities is called their “compliance yield”.

You get a figure of around £160 billion by adding up HMRC’s total compliance yield for every year since 2010/11—roughly the first full year of the coalition government.

Those figures—at least the ones since 2011/12—are provided in a chart in HMRC’s annual report. The 2010/11 figures are in an older report, and are known to be of worse quality. 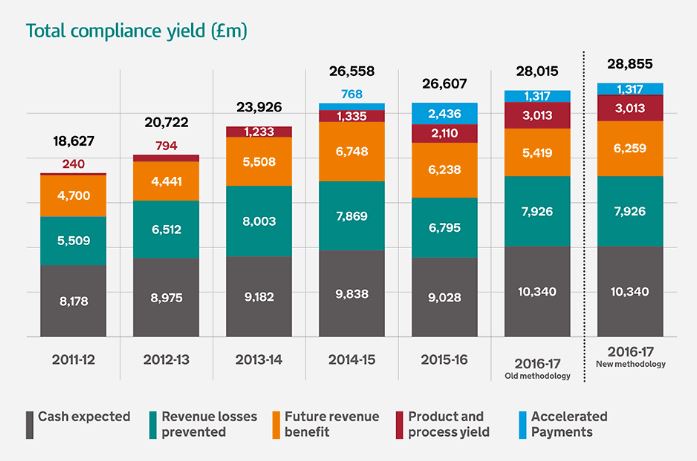 This chart, though, isn’t telling you the whole story.

Apart from the ‘new methodology’ 2016/17 figure, the total amount of money being shown in each year isn’t what HMRC thinks it actually made in extra revenue for those years. It’s including the money HMRC thinks it will make in future years, up to 2021/22.

That’s because part of what HMRC estimates it has secured each year is called “future revenue benefit”, which is included in the chart. This is an estimate of the future benefits of the compliance work already undertaken, spread out over about five years.

So when HMRC and the Prime Minister say £160 billion has been “secured”, they’re actually talking about expected revenue for the future as well, not just what’s actually been realised so far.

HMRC sets out separately how much money it thinks was actually secured in these ‘future revenues’ each year since 2011/12.

That means that the actual amount secured so far, excluding the expected benefits to come, amounts to just under £150 billion, with the rest expected over the next five years, as a result of action that’s already been taken.

Some of the other money isn’t certain either

The independent National Audit Office is satisfied that “HMRC has robust processes in place for estimating and reporting the value of the yield that it has generated through its compliance activities”, but notes there is still uncertainty in the estimates.

The largest part of the compliance yield each year is called “cash expected”, which is what HMRC estimates it is likely to recoup in lost revenues that year. It’s adjusted to take into account that it won’t be able to collect every sum it identifies.

A large sum is also is made from preventing losses before they happen. This is where HMRC estimates its own actions have prevented losses that could otherwise have occurred, like stopping fraudulent repayment claims, according to HMRC.

You’ll often also read about governments trying to close “tax loop holes” by introducing new laws or putting tighter systems in place. These make up a smaller part of the money that’s recouped in the HMRC figures—about £3 billion last year.